“Here's an Ask JKM that might stir the pot a little: what genre TV show and / or series do you think is the most overrated?

Granted, this is a matter of opinion.  It's my experience every show or movie is someone's favorite.  I certainly know that some of my favorites will never grace a serious critic's Top Ten.  Nonetheless, there are some projects whose importance is blown way out of proportion.

Personally, my vote for most overrated genre TV series is "The X-Files."  I know it's a favorite of yours, but I just couldn't get into it.  For me, it will forever be a monster-of-the-week show wrapped in an overly dense mythology.  Plus, it spawned a series of imitations that cluttered the airwaves for years.

I'm very curious to hear what you have to say on the matter.”

All right, Jason, you are trying to stir the pot.  You’re going to get me in trouble!  But that’s okay.  It’s actually a great question, and I’m glad you posed it.

You’re right, of course, that I have a high opinion of The X-Files.  It’s one of my favorite series of all time for many reasons, and I encourage you to stick around for my 20th anniversary blogging celebration, and re-consider your own assessment of it.  I’ll be tackling “Gender Bender,” at long last this week.

For me, the series offers qualities that earn it the stellar critical reputation, namely the two-lens view-point of every episode (belief vs. skepticism).  Secondly, I appreciate the program's reassertion of the Gothic Paradigm (as a Romantic response to Enlightenment/rationality) but for the Clinton Age rather than the Victorian one.

But okay, your question wasn’t really about The X-Files. 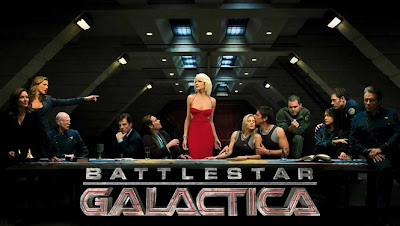 The question of “overrated” is an intriguing one because there’s actually some nuance to it.

First: a work of art can be overrated without necessarily being bad.

So being “overrated” sounds like a colossal insult or put-down, when in fact what is being expressed is the notion that the critical response is out-of-proportion to the actual value of the art in question.

For me, the most overrated cult-television series in history has to be the remade Battlestar Galactica of last decade, from producer Ron Moore.

Again, I’m not saying that the series itself is terrible, or without value and merit.

I’m saying that the critics rated it too highly, given the actual value of the thing.  I mean, this program, while still on the air, was termed the greatest science fiction series in history by many respectable critical outlets.

Battlestar Galactica was, before the historical tally could be considered, thus termed superior to The Twilight Zone, The Outer Limits, Star Trek, and Doctor Who.

As I've written here before, I find the re-imagined Battlestar Galactica to be a very entertaining program, one that I happily put on a par with something like 24 (2001 - 2010).  In other words, Battlestar Galactica is extremely addictive and engaging, but in the final analysis not much more than a great thrill ride.  I enjoy watching the series, but I can't, frankly, understand why it has been raised to such a rarefied, over-hyped pedestal among genre fans and critics.

In the first place, the series boasts an utter lack of imagination about the universe at large.  In the world of this Galactica, it's just us (humans) vs. them (Cylons), with nothing in between.  No alien beings, and no truly alien environments.  Personally, I find that worldview extremely depressing.   If we reach the stars and find out there are only liberals, conservatives, and religious zealots, then the human adventure isn't just beginning...it's over.

The aesthetic strategy of the re-imagined series seems to be "world-building is notoriously difficult, so we're not even going to try."  Is this approach really worthy of praise, even if it is true?

I can fully understand and appreciate the budgetary and creative reasons driving this production philosophy, but that still doesn't make the strategy any more noble or efficacious. Whatever their relative flaws, series such as Star Trek, the original Battlestar Galactica, Buck Rogers, Space:1999, Babylon 5, and Farscape at least attempted to imagine what other worlds and alien cultures might look like.  They didn't always succeed, but the effort was made to transport audiences to new, imaginative realms.  Not so here.

The much-ballyhooed social commentary of the Ron Moore-developed Battlestar Galactica is also a bit too on the nose.  With talk of "no fly lists," and politicians telling other politicians to "go frak themselves," the series makes no attempt to cloak its War on Terror political sensibilities behind imaginative or timeless metaphors.  What you see on the surface is all there is.  No analysis, interpretation, or deciphering is really necessary.  Everything is spelled out.

Then spelled out again.

But here's the biggest problem: This is a series that ended a four year long, very intricate sweeping mystery with the simple cliché “God works in mysterious ways,” essentially, and the fact of a technologically-advanced, star-faring people accepting a life-style without indoor plumbing.    Next to Lost, this may be the biggest "fuck you" to dedicated fans in sci-fi history.

There are many, many fine episodes of the series, of course.

I’m an absolute sucker for “Scar,” for example, which is a kind of outer-space allegory for World War I aerial combat, or the Red Baron milieu.  I think that episode, and many others, work like gangbusters.

But every week a title card comes up on-screen as Battlestar Galactica opens.  It re-affirms that the Cylons have a plan.

By the end of the series, it’s clear that the Cylons may have had a plan, but the writers did not.

And since Battlestar Galactica is a serialized program, unlike a standalone program for example like Star Trek, any critical evaluation of the series must factor in how successfully all the elements are brought together at the series’ conclusion.

I would submit that Battlestar Galactica failed this test in terms of believability, and in terms of fidelity and consistency to the clues presented along the run of the series.

Thus, Battlestar Galactica is my choice for most overrated genre TV series.
at March 04, 2013