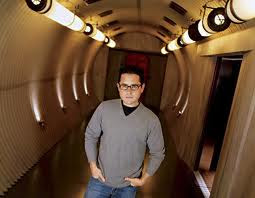 I’ve received a lot of e-mail in the past few days asking me my feelings about the news that J.J. Abrams is directing the next installment of Star Wars.

I have two thoughts about it.

The first is that J.J. Abrams is probably a better, more natural fit for Star Wars than he is for Star Trek.

Abrams’ 2009 Star Trek film was exciting, and the characters were well-drawn, and appealing.  I did miss, however, the franchise’s trademark social commentary.   I feel the film still gets a pass on that count because Abrams accomplished what several previous Star Trek directors had not.  He re-introduced the franchise to a younger audience.   So I applaud him for making a colorful, exciting, and fun (if relatively superficial…) action movie that rejuvenated the Star Trek experience.  I want Star Trek to be there for my son, and for his children, and I think Abrams' Trek went some distance in making that a possibility in the way that Nemesis and Enterprise simply did not.

Now, there is rampant speculation about Star Trek: Into Darkness (2013) at this point, but I’m not at all encouraged by the film’s premise of another mad-man bent on revenge, using a weapon of mass destruction as his tool of choice, as I’ve written here.

And yes, I’ve read that the film features a kind of post-9/11 vibe to it, but having the “feel” of a certain earthbound context is different than boasting a social critique.  I’m open to the idea that the film will thread that needle successfully, but we’ve had so many post-9/11 movies and TV programs already (Battlestar Galactica, for one,) that I find it difficult to get too enthusiastic with it as a context for a Star Trek film in the year 2013.  It’s not as if 9/11 is the only important event that’s occurred in our culture and is worthy of comment.

So Star Trek: Into Darkness may be as much fun as the first film, but it isn’t going to be met, at least by me, with the same level of appreciation as the first film if the social commentary angle isn’t present to some significant degree.

But Star Wars is a different animal, and a different kind of epic. It is not as didactic as Star Trek, and more mythological in nature.

Star Wars films need not contain deep social commentary about our existence here on Earth to live up to the best aspects of the franchise’s history.  And J.J. Abrams is more than competent in terms of staging action sequences, presenting colorful, humorous characters, and integrating state-of-the-art special effects.  As long as he makes his Star Wars look different than his Star Trek, I believe the Star Wars universe is likely a good place for him to tell us a great story.

My second thought, however, is that it’s an absolute shame that one man gets to shape the appearance and content of the two most popular “space” franchises of the last three decades.

That’s not a direct knock against Abrams, by the way.  I’d feel exactly the same way if anyone were taking on both assignments virtually simultaneously.

There are plenty of talented directors who could take on Star Wars at this juncture, and so to choose Abrams -- who is now associated with Trek --  just seems, well, kind of underwhelming on principle.

I’ve been incredibly impressed, for instance, with the way that Kathryn Bigelow handles action sequences over the years.  We’ve never seen her take on a pop culture phenomenon like Star Wars, and she would have been a far more interesting, daring, unique, and out-of-the-box choice at this juncture.   We don't have any pre-conceived notions of her as a director in the genre, so she would have more freedom, in some sense.  With Abrams, there's a feeling that we are familiar with what he can do regarding space adventuring.

In geek circles, we all pre-judge, even if we claim we don’t pre-judge, or don't intend to pre-judge.  I’m trying very hard not to pre-judge Star Trek: Into Darkness, though all my instincts tell me to maintain low expectations so as not to be crushed at the prospect of yet another generic “explosive action thriller.”

Contrarily, an explosive action thriller falls more in line with my expectations for Star Wars, I readily acknowledge.   Does this mean that I prefer Star Trek to Star Wars?  Well, in general, I like Star Trek on television, where it boasts the freedom to experiment (and sometimes fail) with big ideas, and I like Star Wars on the big screen, where it can be epic and beyond that, mythic.

I suppose I want Star Trek to inspire me and make me think, and I want Star Wars to thrill me.

J.J. Abrams has proved he can do the latter, but the jury is still out on the former.