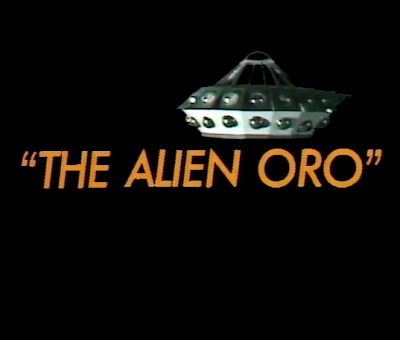 Walter Koenig -- Mr. Chekov himself -- arrives on the Earth Ship Ark in “The Alien Oro,” this week’s selection from the Canadian 1973-1974 TV series, The Starlost.

Mr. Koenig plays an apparently cold-hearted, emotionless citizen of the distant planet Exar, one who has crash-landed on the Ark and is desperate to return home before his planet passes out of range.  So desperate, in fact, that he has begun cannibalizing portions of the Ark to repair his damaged space ship. 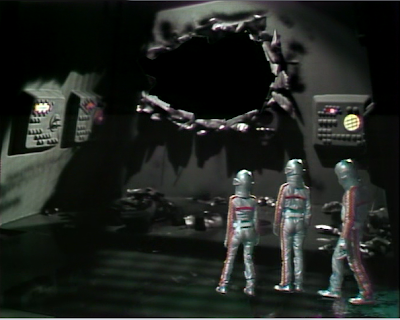 Despite the fact that he appears human and wears a terrible gold Lamé suit, Oro is actually an interesting character…our first extra-terrestrial on The Starlost.  He is not overtly villainous in character, but, like Mr. Spock, seems to have ice water running through his veins at times.  Koenig isn’t my favorite Star Trek actor, but he makes some unique acting choices in this episode that successfully add to the character's alien-ness  His Oro is a man of frequent reflection, as many quiet, calculating reaction shots reveal.  He’s always thinking out chess moves, it’s clear. 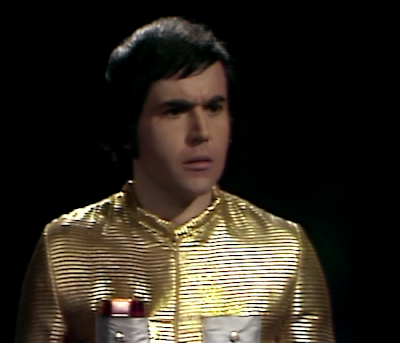 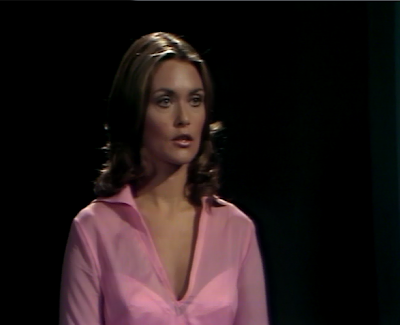 The heart of this episode involves Oro’s “feelings” (if you can call them that) for a human woman on the Ark, a character named Idona (Alexandra Bastedo) who will die without his help, and the help of advanced Exarian medicine.

But Koenig doesn’t play Oro as a man of emotions, but rather as a man divorced or disassociated from his emotions (as well as other beings...), leaving us to decide his exact motives for ourselves.  He’s an ambiguous character, but one of tremendous intelligence, and I enjoyed both the character and Koenig’s performance, which, at first blush, I dismissed as disengaged and stilted.  On closer reflection, I detected the opposite was actually true.  He underplays in the extreme, but shows flashes of cunning, and yes, humanity.

The crux of “The Alien Oro” involves Oro’s motives.  He could, ostensibly, fix the Ark’s course, thus avoiding the collision with the "solar star,"(!) but claims he must return first to Exar to save  Idona's life.  He even promises to come back, if range permits, to help out Devon (Keir Dullea), Garth (Robin Ward) and Rachel (Gay Rowan).  The rub is that you are never certain he is telling the truth, or operating honestly.  Instead, he may just be cannibalizing parts and telling Devon what he wants to hear so he can make his escape back to space in time.

There have been a few episodes of the series so far that have tried to play with the idea of Garth romancing a guest star character, since the issue of the Devon-Rachel-Garth love triangle is obviously settled in Rachel’s mind.  She’s chosen Devon.  Accordingly, Garth has shown interest in female characters in “And Only Man is Vile” and even “Gallery of Fear.”  But “The Alien Oro” presents his first substantial romantic relationship with another woman, one that is fully reciprocated (and not some kind of malicious ruse).  Thus, the episode provides a love triangle of its own, with Oro winning the day, apparently, because he possesses the ability to save Idona, and true love, as we all know, is not selfish.

In terms of the other characters, “The Alien Oro” doesn’t contribute much of worth.  Rachel locks herself in Oro’s spaceship and panics, necessitating a rescue. 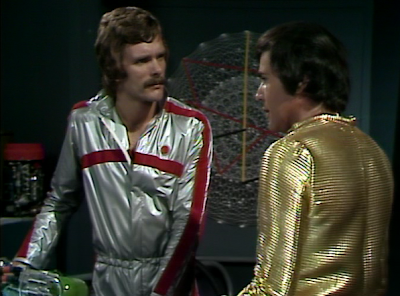 And Devon continues to come across as strident and combative.  He has a lot on his mind, of course, namely the rescue of the Earth Ship Ark.  But he frequently seems commanding and bossy, even though he holds no title of authority or command.  It’s clear the series writers were attempting to make their lead character a kind of forceful alpha male, but that kind of “command” mentality doesn’t fit very well with what we know of Devon’s history.  First and foremost, he is someone who asks questions, who challenges the status quo.  He's a thinker.  That’s a good deal different than presenting Devon as a capable fighter and negotiator.  As I like to point out, he’s basically a Mennonite on a spaceship, and the changes to his character to make him more "cowboy"-like and assertive don't really work in my opinion.

Although the events of “The Alien Oro” are decidedly low-key, with no real villain and no overt threat, the episode nonetheless remains one of the best installments of the series.  Koenig’s icy, dispassionate presence provides a good counterbalance to Devon’s blind passion/obsession with his mission, and the romantic relationship between Garth and Idona is actually believable, and modestly touching.

I tend to like the "smaller," almost modest episodes of The Starlost, ones with fewer characters, and straightforward narratives.  In these episodes, the series' reach doesn't exceed its grasp by such a wide margin.  "Lazarus in the Mist" and "The Alien Oro" are two prime examples, I suppose.

Next week: “Astromedics” adds further to the confusion and inconsistencies about the Ark and its infrastructure.
at January 13, 2013