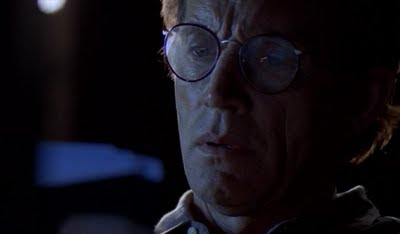 I have long been an admirer of Adam Chamberlain's writing at Back to Frank Black.  He often writes pieces at that fine site called "What the Killer Sees," focusing on the (sometimes gruesome...) details of each murderer and serial killer featured in Millennium.
Today, Adam chooses "Frank Black" as the object of his study, and it's a fascinating read.
Snippet:


Frank Black is Millennium’s beacon of hope. In a world tainted by moral bankruptcy, tormented by eldritch evils and teetering on the verge of apocalyptic meltdown he is our best line of defence. He knows evil having seen the world through the eyes of killers, and yet time and again he emerges from his visions triumphant and catches the bad man.
Throughout Season One, Lance Henriksen asserts Frank Black as a devoted husband and father to a wholly believable family unit. Famously, Chris Carter directed Lance to invest the consulting profiler with a sense of quiet authority through a stillness and reserve that did not come naturally to Lance but which led him to find the truth of the character. As a result, and in spite of his insights into the minds of killers, Frank seems so far from truly becoming the capability he so vividly comprehends. It is thus in the contrast to this consistency of poise and carefully measured control across the previous twenty-two episodes that Frank’s transformation in “The Beginning and the End” provides such a powerfully dramatic pay-off.
Again, I want to thank Adam for contributing this great look at a classic Millennium episode, and urge you to check out the whole article.
at May 04, 2011