Welcome to the Post-Apocalypse: The Road (2009) 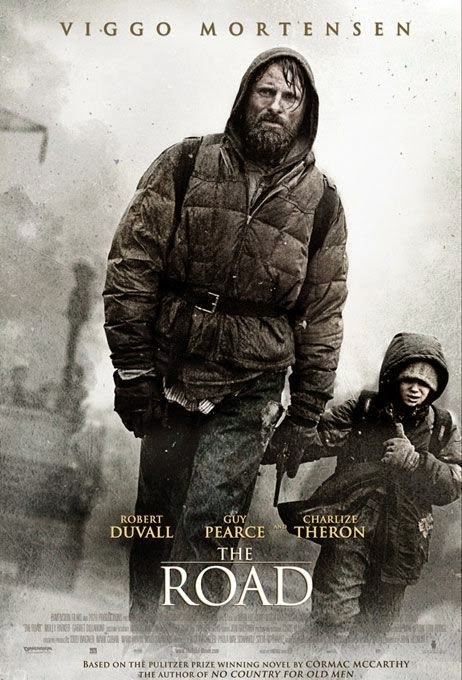 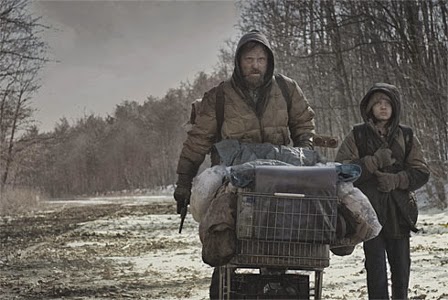 So the father demonstrates for the boy how to commit suicide by firearm (a pistol), should capture by cannibals become inevitable. He lets the boy look long and hard at rotting corpses, at death itself in hopes that it will somehow become commonplace, and therefore not frightening. Weighted down by his sense of responsibility, the father also sees betrayers and monsters in every encounter with other human beings. He trusts no one.

I'm the father of a young son, myself, and I was moved by The Road, which -- without ever seeming cheesy or maudlin, or even relying on rampaging cannibals for drama -- raises questions about what it means to be a "good" parent in a grim situation like this.

The boy is portrayed brilliantly by McPhee as, well, an absolute innocent...one who carries a stuffed animal elephant in his arms at all times, and who collects little trinkets that catch his youthful fancy: bottle caps, pennies, and the like. The boy's tenderness and vulnerability are absolutely palpable, and so you feel intimately the Father's existential dilemma.

The weak link in this family dynamic is the Mother, who selfishly selects suicide because "all the other families are doing it," the most-bizarre form of Keeping up with the Jones you've ever encountered. She walks off into a dark winter night alone, leaving her husband and son behind...and is never seen again. If the Mother had chosen to live -- to fight -- perhaps she could have tempered the Father's harshness, and helped the boy understand his life and those in it, better. But it wasn't to be.

You know all along what's coming in The Road, and you start to dread this emotional, gut-wrenching crescendo, the impending separation. The father grows progressively weaker, until finally, there's the moment when he must say his final goodbye to his son, to his beloved boy.

My wife, Kathryn, often reminds me that Joel doesn't belong to us; that he's his own person, with his own path and his own destination in life. So it's our most critical job as parents simply to set his course, to prepare him well for the challenges he will face. "Healthy and happy," she often whispers in my ear, when I threaten to over-protect or smother him with helicopter parental coddling. Because we can't fight all Joel's battles for him; because when we're gone, he needs to fight those battles successfully. He needs to have experienced successes doing so too, so he doesn't feel hopeless, or alone, or less-than-confident in his abilities to navigate life.

That's difficult, though, isn't it? To step back.

And that's the pain that Mortensen's character carries like an albatross around his neck. Has he done enough? Has he made the right calls? Has he erred by being too hard, or was he too soft? The film's powerful last scene provides an answer of sorts to these questions. The movie comes right up to its last moment before shedding, even partially, a sense of ambiguity about the boy's fate.

The Road also asks some pretty meaningful questions about the kind of world we are leaving to our young sons and daughters. The nature of the apocalypse in the film is deliberately left unspecified. It could be a nuclear winter after a terrible war; or it could be post-asteroid impact for all we know. But still, there's a powerful notion at work here, about the things we hand off to our children. Our morals. Our hopes. Our planet itself. Do we leave it for them better than we found it, or worse than we found it? Is this not the most important question we, as parents, should ask ourselves? Isn't everything else -- the bills, the bedtimes, the Christmas presents -- pretty damn unimportant by comparison?

It understands that the end of the entire world is -- perhaps paradoxically -- a very...personal thing. Especially if you're a parent.
at May 14, 2015