Go Ape Week! Return to the Planet of the Apes: "The Unearthly Prophecy"

The third episode of the Saturday morning series Return to the Planet of the Apes (1975) introduces a critical element to the animated production: the Under Dwellers.

In “The Unearthly Prophecy,” human astronauts Jeff and Bill travel through the arid Forbidden Zone, and spy gorilla soldiers on the march.  Specifically, General Urko’s army is hunting an unknown enemy nearby.

When a hatch suddenly opens up in the ground, Jeff and Bill travel through it and discover the secret of the apes’ nemesis.  Beneath the planet of the apes live cloaked human mutants, the aforementioned Under Dwellers. 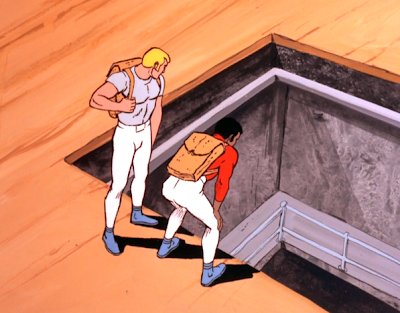 And, making matters worse, these Under Dwellers are holding, Judy -- the third astronaut from the 20th century -- as their captive.   She seems to have amnesia, and the Under Dwellers revere her as some kind of God because she resembles a statue bust found in their subterranean caverns.  In a crazy twist of fate, that is actually a statue of Judy, a 20th century statue honoring one of the missing astronauts. On the bottom of the bust are inscribed the letters “U.S.A,” and the Under Dwellers pronounce it “Oosa.”  They believe “Oosa” is Judy’s name and that she is the answer to a dark prophecy. 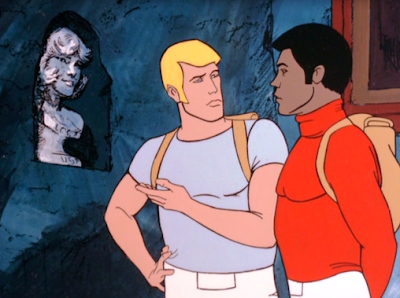 This episode -- which creatively re-imagines elements of the saga spearheaded first in Beneath the Planet of the Apes (1970) -- features some fantastic and very memorable post-apocalyptic imagery.  We see the ruins of the New York Library, Wall Street, the subway, and other New York sights, as well as scraps of twisted, half-melted metal.  Again, this kind of post-apocalyptic, post-nuclear war visual is hardly par for the course for a kid’s show, circa 1975, but the art-work is splendid, and wonderfully detailed. It may be true that the animation on this series is limited, but the background paintings and settings are beyond reproach. 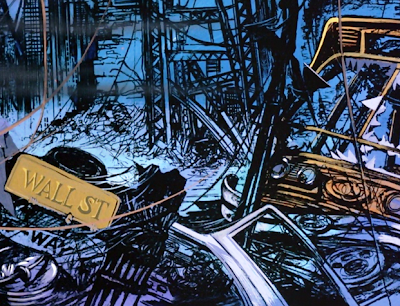 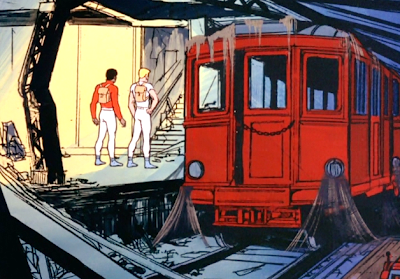 When Jeff and Bill discover the Public Library ruins, they also get their Charlton Heston-Statue of Liberty moment.  The astronauts realize that they have returned to Earth, only in their own distant future.  “What could have happened?” they wonder, but the ruins surely tell the story.  Man destroyed himself.

“The Unearthly Prophecy” also introduces the leader of the Under Dwellers, Krador, and much detail regarding Under Dweller Technology.  In Beneath the Planet of the Apes, the mutants in New York City had the Alpha-Omega Bomb and the “defensive” weapon of mental telepathy, which could create illusions, but precious little in terms of advanced technology. 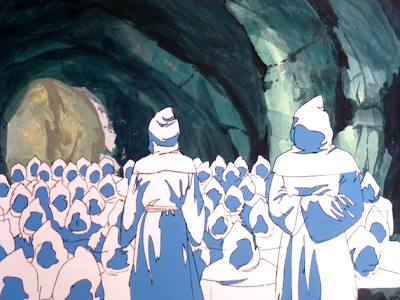 Here, the Under Dwellers don’t actually create illusions, but can nonetheless move mountains up and down on the surface.  They also boast huge, high-tech, energy generators in their caverns, as well as control panels by the dozen.  The animated series seems to be setting-up the Under Dwellers as a highly technological race then, and a different kind of foe for the apes.
at July 10, 2014

Email ThisBlogThis!Share to TwitterShare to FacebookShare to Pinterest
Labels: Go Ape Week, Return to the Planet of the Apes