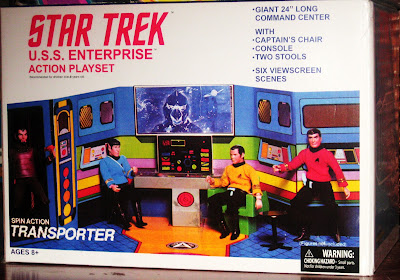 I've featured other 1970s Mego playsets here on the blog (from Flash Gordon, Planet of the Apes and The Wizard of Oz to name a few...), but this Star Trek U.S.S. Enterprise "Action Playset" was the toy of choice for a generation of Trekkie kids. 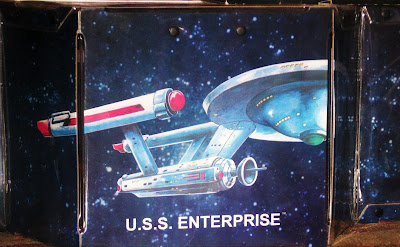 This mock-up of the U.S.S. Enterprise interior (bridge and transporter room) was a "giant, 24" long command center," "with captain's chair, console, two stools" plus six interchangeable "viewscreen scenes."  The set comfortably housed all the Mego Star Trek figures of the era, and, while not very show accurate in terms of design, was nonetheless a great home base for any Starfleet crew.

The coolest aspect of this famous Mego toy, no doubt, is the spinning transporter chamber.  You could place a landing party team member inside the chamber, spin a blue wheel, and then hit a red button to beam him down (to the outside of the playset....  Another spin and a touch of the green button would bring him back aboard.  Meanwhile, the yellow zig-zag/checkerboard details made it appear as if the crewman's atoms were actually spinning madly about.

It sounds incredibly simple, but this toy feature is really captivating.  My son Joel is not yet a devoted Star Trek fan, but he loves to play with the transporter chamber on this Mego collectible. 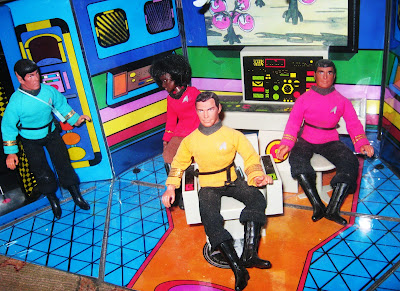 I remember lots of good times playing with this particular toy as a boy.  I still have my original playset, which also features a handle and the capacity to fold up for mobile play.  My old one is all ripped up, however, so last year for Christmas I purchased this "repro" of the playset from Diamond Select.  All my photos here are of that re-do of the classic toy.

I must have cherished this Mego playset as my favorite of all toys...until in 1976 Mattel released the three-foot long Eagle Transporter toy from Space: 1999, perhaps my favorite collectible ever.

Below, you can check out a 1975 commercial for the Mego U.S.S. Enterprise action playset, featuring the transporter and other features in all their glory...