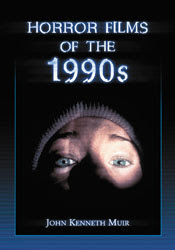 Very shortly now (in just days, I hope...), my book Horror Films of the 1990s will be published. If you've followed my work in print, you will realize that it is the long-awaited follow-up to my earlier texts, the award-winning Horror Films of the 1970s (2002) and Horror Films of the 1980s (2007).
Like its two predecessors, Horror Films of the 1990s is a seven-hundred-or-so page survey of a wide swath of scary (and not-so-scary) films. Over three-hundred films are reviewed in detail in the book, and I also contribute a lengthy history about the decade and the particular events that shaped the genre cinema from the years 1990 - 1999.
Basically, the thesis of all my "Horror Films of..." books is that art universally mirrors life, and that you can better understand the horror films of any particular epoch by learning more about what was occurring in the culture at the time. In other words, I write a great deal about context. Therefore, Horror Films of the 1990s gazes at quite a few historical trends, and how those trends found voice, sometimes surprisingly, in the horror films of the day.
Two important nineties "Zeitgeist" touchstones involved the Human Genome Project and the Internet, for instance. Many films in the decade looked at this scintillating notion of a new Pandora's Box being opened, either in terms of genetic science or computers. Films such as Jurassic Park, Mimic, The Island of Dr. Moreau and Deep Blue Sea focused on Frankenstein-like genetic horror, while films such as The Lawnmower Man, Brainscan, and Ghost in the Machine reflected fears involving new technology. Both trends were really expressions of our culture's long-standing fear about "science run amok."
Horror Films of the 1990s remembers other trends in 1990s horror films too. Another notable shift from the 1980s involved the "morphing" of the famous faceless slashers (like Jason) into "Interlopers," murderous and dynamic individuals who insinuated themselves into the lives of average Americans and American families. Films such as The Hand That Rocks The Cradle, The Guardian, The Temp, Single White Female and Cape Fear are notable examples of this particular trend.
This same decade was also very much about the "homogenization" of horror, as studios made genre films their A-products: beneficiaries of big budgets and more well-known casts. But with greater costs involved in production, horror films also had far less room to transgress, and that proved a problem for a genre based on the foundation of shattering moral decorum and tradition.
Another notable difference: In the 1970s, we saw films with titles such as I Spit on Your Grave and The Texas Chainsaw Massacre. In the 1990s, we got films with generic-sounding titles such as Scream, Mimic or The Temp. So-called "brand name terrors were also produced with easy identification in mind, and for quick sale on the home video market.  The "Grim Fairy Tale" trend was one example of using famous historical myths or cultural icons (Leprechaun, Rumpelstiltskin, Uncle Sam, Jack Frost, etc...) to quickly and effectively capture audience attention.
In general, the 1990s aren't considered a particularly good time in horror film history. Many of the films produced in this era don't stand up well next to the films of the 1970s or 1980s, for instance.
And yet I came away from my experience writing the book appreciating the good horror films of the Clinton Era all the more, perhaps, since they were fewer and farther between than in the previous decades I'd investigated.
So if you're a fan or follower of this blog and my books, I hope you'll seek out Horror Films of the 1990s, and let me know what you think of the book.
You can order Horror Films of the 1990s at Amazon, or through the publisher, McFarland.  Also, if you get the chance, you can see me discussing Horror Films of the 1990s at my author's page on Mahalo, here.
I appreciate all your support!
at September 14, 2011