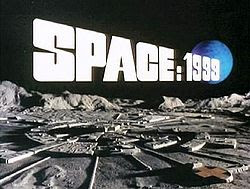 Last week on the blog, I had a lot of fun celebrating the 45th anniversary of Star Trek.  Today -- September 13, 2011 -- I want to celebrate all things Space: 1999 (1975 - 1977).
As you may recall, that spectacular Gerry and Sylvia Anderson series from the disco decade involved the Moon's cataclysmic departure from Earth orbit on the far flung date of September 13, 1999.
Well, we're eleven years past Breakaway Day now, and the moon is still up there in the night sky, but Space: 1999 (now thirty-six years old), remains one of my favorite programs in science fiction history, even if the title of the series itself suggests we are past some kind of arbitrary expiration date.
Last Christmas brought the release of Year One on blu-ray, and if you haven't seen Space:1999 in that format...you're in for a tremendous treat.  I highly recommend it.
So throughout the day, look for some of my Space:1999 posts from the archive.
at September 13, 2011