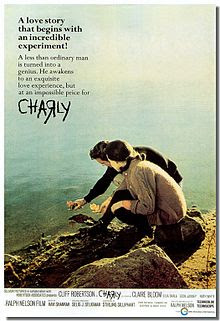 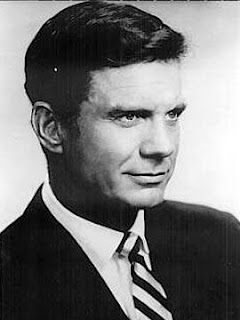 It is now being widely reported in the press that Oscar-winning actor Cliff Robertson has passed away at the age of eighty-eight.
A distinguished and popular performer, and a populist hero to so many Americans for his role as whistle-blower in a check-writing scandal at Columbia Pictures back in the 1970s, Robertson was also a great gentleman.
I can affirm that last descriptor from personal experience.
I had the delightful assignment of interviewing Mr. Robertson back in 2003 for my book, The Unseen Force: The Films of Sam Raimi, and I'll never forget his kindness, good humor, and affability.  After the book came out -- many months later -- Mr. Robertson telephoned me again, out of the blue, to inform me he had received the book I sent him, and how much he enjoyed reading it.
On both occasions that we interacted, I was struck by Mr. Robertson's soft-spoken, dignified manner.  He absolutely loved playing in the Spider-Man films, and also working with Sam Raimi.  He had some funny stories to tell me about Mr. Raimi's love for his car, the Delta 88.
In broad terms, Robertson is well-remembered for portraying a young John F. Kennedy in 1963's PT 109 and yet it remains his sterling genre work that, perhaps, makes him most familiar to people of my generation.  Robertson earned an Academy Award for best actor for his starring role in 1968's Charly, an adaptation of Flowers for Algernon, and also launched The Outer Limits as a TV series by starring in the pilot episode "The Galaxy Being."  One of Cliff Robertson's earliest roles landed him in the realm of space adventure, playing the dashing lead character, Rod Brown, in the 1953 series Rod Brown of the Rocket Rangers.
Over the decades, Mr. Robertson also headlined two episodes of Rod Serling's The Twilight Zone ("The Dummy" and "A Hundred Years over the Rim,") and played a special celebrity villain, "Shame" (a take off on "Shane") in the 1960s, Adam West Batman series.
Robertson also had significant roles in Douglas Trumball's mind-bender, Brainstorm (1983), and in John Carpenter's sequel, Escape from L.A. (1996), wherein he portrayed a fundamentalist Christian President of the U.S.A.

Throughout the 2000s, Mr. Robertson portrayed Ben Parker, Peter's uncle, in Sam Raimi's Spider-Man films, in 2002, 2004 and 2007, respectively.
At this time of sadness, we have Mr. Robertson's excellent efforts on the big and small screen to re-visit, remember and explore, and yet there's no doubt that this tremendous talent will be greatly missed.
I offer my deepest, most sincere condolences to his family in this time of loss.  I've interviewed many amazing and wonderful actors over the span of my career, but I can honestly state that Mr. Robertson was one of the kindest and most gentle men I ever encountered.
at September 11, 2011