CULT TV FLASHBACK #142: The Secrets of Isis: "The Lights of Mystery Mountain" 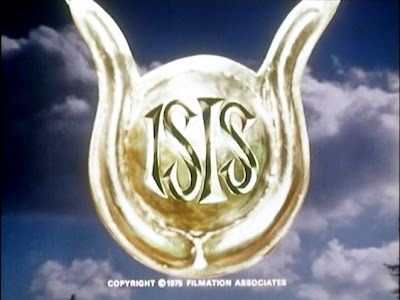 The highest rated program on Saturday morning television circa 1975-1976 was the superhero program The Secrets of Isis, originally a portion of The Shazam/Isis Hour on CBS.

Created by Filmation under the aegis of Lou Scheimer, The Secrets of Isis starred beautiful Joanna Cameron as Andrea Thomas, a science teacher at Larkspur High School who – on a trip to Egypt – unearthed a golden Egyptian amulet that gave her “the powers of animals” and “power of the elements.” After this great discovery, Thomas became – in the words of the voice-over narrator – a “dual person,” both a mild-mannered teacher and the remarkable deity, Isis. 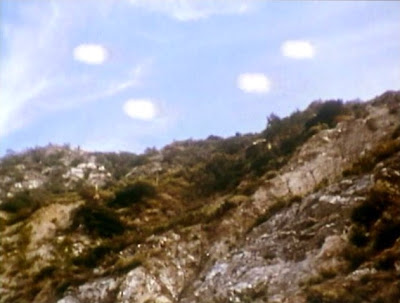 In “The Lights of Mystery Mountain,” which first aired on NBC on September 6, 1975, Andrea is faced with an unusual mystery. One of her students, Cindy Lee (Joanna Pang) photographs what appear to be flying saucers over Mystery Mountains.

Additionally, there are reports of an abandoned car in the area and “burn spots” on the ground nearby, telltale signs, perhaps, of an alien abduction. A panic begins to build amongst the locals. “What are you going to do if we bring you back a real life UFO?” Andrea asks her superior at Lakespur.
Andrew, Cindy and Rick Mason (Brian Cutler) investigate the mystery, and soon learn that a shady real estate developer, Mr. Moss, has been arranging false UFO sightings with the help of two teenage boys. The boys believed t it was all just a harmless prank at first, but soon realized that Moss meant business, and was trying to run off the denizens of Mystery Mountain so he could purchase the land and tap into a newly discovered vein of gold. 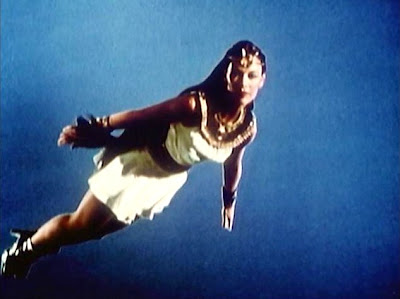 Fortunately, Isis teaches Mr. Moss a lesson. She first pursues him by air. “Oh Sun that changes day to night, help me stop this man in flight,” she declares, invoking the power to fly and chase him.

Later, Mighty Isis corners Mr. Moss by stating “Ancient Sphinx – all knowing and wise – confront this man with his own lies.” Suddenly, a desperate Moss is ambushed by tiny UFOs and -- his mind cracked -- begs for help from Isis. She takes him to the local sheriff and the matter is finally resolved.
As you can probably tell from the above-synopsis, The Secrets of Isis isn’t exactly high-brow entertainment, but nor was it meant to be. Instead, the episode plays – roughly – at the level of juvenile a Scooby Doo episode, or perhaps a Super Friends episode of the mid-1970s era. In other words, there’s no real violence to speak of, nothing particularly dangerous about the story, absolutely nothing distinctive about the main characters, and a strong moral lesson is conveyed by the end of the twenty-two minutes.
Much of the program plays like warmed-over Adventures of Superman clichés, with characters noting that they never see Isis and Andrea at the same place at the same time. Meanwhile, Rick Mason is the Lois Lane of the show; often in need of rescue and always condescending to Andrea while simultaneously in love with Isis. 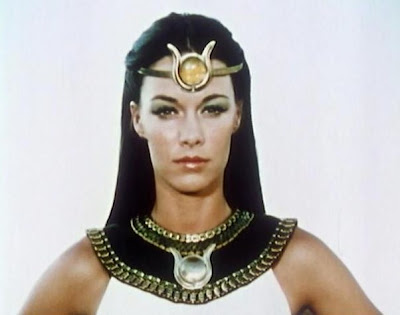 What makes The Secrets of Isis particularly memorable for folks of Generation X is the presence of Joanna Cameron in the lead role. The actress conveys a strong sense of presence, decency and strength as Isis and -- by sheer force of charisma -- manages to overcome some of the poorer special effects and hackneyed plotting.

Dressed in a white, jewel-bedecked, sleeveless (and short….) gown and an Egyptian-style headdress, Cameron is  an absolute knock-out too.
In the mid-1970s, female superheroes were all the rage in the pop culture with the likes of Lynda Carter’s Wonder Woman, Lindsay Wagner’s Bionic Woman, and Electra-Woman and Dyna-Girl. Today, many kids of that era (myself included) retain strong memories and impressions of these super-powered women crime fighters, and it’s probably fair to state that the impression of strength, decency and power such characters exerted survives the sometimes weak storytelling on any particular series.
Of the bunch, The Bionic Woman is undoubtedly the best program overall, with Wonder Woman coming in a close second. The Secrets of Isis does not play its action as camp in the style of the Adam West Batman (1966-1968), like Electra Woman and Dyna-Girl, but today may nonetheless be interpreted as camp simply because tastes have changed so radically in the intervening thirty-five years.

That fact established, The Secrets of Isis is still perfect, unjaded entertainment for young children, and, I suppose, for those of interested in a sense of nostalgia. 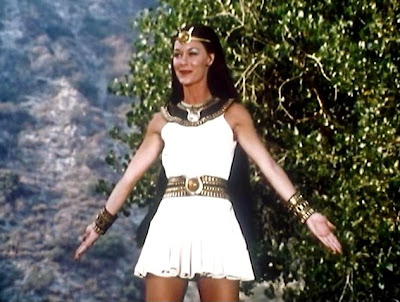 One contextual, culture thing I observed in “The Lights of Mystery Mountain” is that the bad-acting teenagers learn their lesson, are repentant, and then treated with mercy and understanding by Isis. She sees that they are sorry for their actions, and sees no need to pursue the matter further, or ruin their futures over one mistake.
In today’s America, I don’t think we’d see such mercy. Instead, the kids would be tried as adults, and locked up in jail for five to ten years.
We have come a long way, baby, since 1975. But I’m not entirely sure we’re headed in the right direction. The Secrets of Isis is an innocent Saturday Morning TV series for a much more innocent time in American history.
at September 20, 2011