Now Available: From Aldo To Zira: Lexicon of the Planet of the Apes 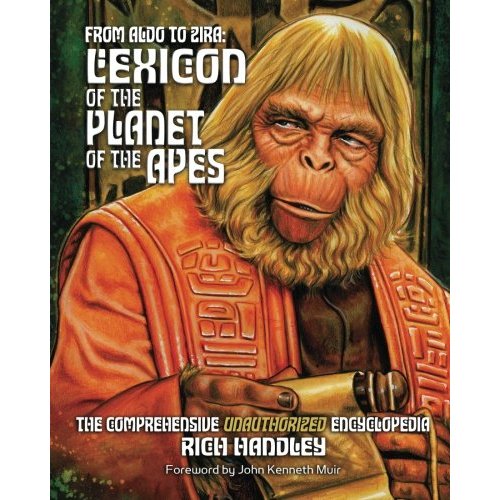 Rich Handley, the author behind the amazing and addictive Timeline of the Planet of the Apes: The Definitive Chronology (2009) is back with a follow-up reference text this holiday season: a complete encyclopedia of the Planet of the Apes saga.  It's called From Aldo to Zira: Lexicon of the Planet of the Apes.
I've had the good fortune to be involved with this particular text for several months, now.  In fact, I penned the book's foreword, and was extremely honored to do so.  Rich secured my involvement -- that devil! -- by providing me the text of the lexicon in its comprehensive entirety.
Suffice it to say, I didn't get any work done for days.  I hardly saw my wife or son.  If memory serves, I didn't even shave...
This 400+ page encyclopedia is a meticulous, involving, cover-to-cover read that accounts for every single person, place, and thing in the expansive Apes saga.  It charts literally every detail of the the original films, the TV series, the comic books, the animated TV series, the 2001 re-imagination, and even the Mego toys (!) of the disco decade.  No stone has been left unturned; no Hasslein curve left unexplored.
I make it no secret that I consider Planet of the Apes (1968) the greatest science fiction film ever made, and this book adds significant understanding to the ape-o-verse that the Schaffner film so memorably created.
The approach that Rich takes -- and which I admire tremendously -- is one of an impartial, omniscient, dedicated historian.  He records events without bias; he makes important connections.  Entry by entry, he paints for readers a vivid and thorough picture of one possible (fictional...) future.
In my foreword for From Aldo to Zira: Lexicon of the Planet of the Apes, I write at length about how I was introduced to Planet of the Apes at a very young age (and a few years before Star Wars) through ABC's "4:30 PM Movie" and how the apocalyptic "future history" of Earth became something of an obsession for me soon after.
Like the Timeline before it, this book re-kindles that obsession.
Last week, in anticipation of the book's impending release, Rich sent me a handful of PDFs of individual pages (and entries) in the Lexicon, and now I can officially report that the superlative text has been beautifully presented too, by illustrator Pat Carbajal and designer Paul C. Giachetti. The whole thing is simply...dazzling.
So before Rise of the Apes arrives in theaters June 24th, 2011, get a copy of this book (now in stock at Amazon.com) and relive every detail of the impressive, epic Apes saga.
From Aldo to Zira is more fun than...well, you know, right?
at December 09, 2010

Email ThisBlogThis!Share to TwitterShare to FacebookShare to Pinterest
Labels: Planet of the Apes