Thanksgiving Blogging: The Son of Kong (1933) 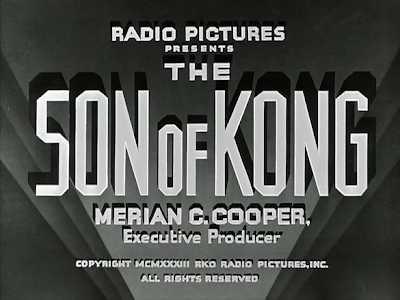 The conventional wisdom regarding this sequel is that The Son of Kong (1933) is a not-very-good, not- very-memorable follow-up to the enormously successful and enormously beloved original King Kong (1933).

It’s easy to see why critics, scholars, and some fans feel this way about the film.  The sequel is but a brief seventy minutes long, two of the original stars -- Bruce Cabot and Fay Wray -- are missing-in-action, and the film was produced on an extraordinarily low-budget.

Furthermore, King Kong is a spectacular, a non-stop rollercoaster ride of action and spectacle, and The Son of Kong…is not.

And yet despite these deficits The Son of Kong is an intriguing little movie, primarily because it focuses almost obsessively on Carl Denham (Robert Armstrong), the man who brought Kong back to modernity because he wanted to give that jaded world a sense of “wonder.”

Denham has been repaid for that act, however, as The Son of Kong opens, with law-suits, public condemnation, and grand jury indictment.  His original desire to “escape” modernity, has, in fact, brought the bureaucracy of modernity crashing down upon him.

We also learn early in The Son of Kong that Denham feels guilty regarding Kong’s death, and wishes -- for his own sake and Kong’s -- that he had never visited Skull Island in the first place.

This is all very interesting, very human material, and there is likely more focus on characterization and character development in The Son of Kong than in all of King Kong.  Robert Armstrong is terrific and charismatic again as Carl Denham, but he shows many more shades of the man here than he was able to reveal in the original Kong.

With its lead character dwelling in self-hatred and guilt, and facing a future of legal entanglements, The Son of Kong depicts a more dissolute, sleazier world than did its predecessor.  In short order, Denham and Captain Englehart (Frank Reichert) slink out of New York Harbor on the Venture not in search of great adventure this time, but in search of a job -- any job -- in the East Indies. 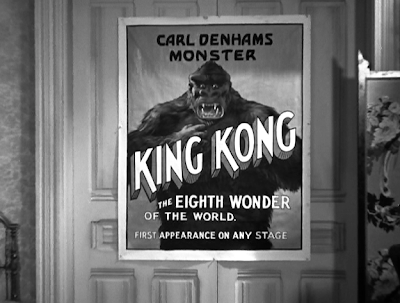 In far-flung Dakang, they settle in at a tiny port and meet another fallen Western entertainer, Peterson, and his lovely daughter, La Belle Helene (Helen Mack).  Both are going nowhere, and have no future save for the next (sparsely populated) show.

Denham and Englehart also meet the troublesome Captain Nils Helstrom (John Marston), the very man who first sold Denham the map to Kong’s island. Helstrom -- a murderer -- is looking for a way to escape Dakang too and soon he, Denham, Englehart, and Helene head to Kong’s island in search of a legendary treasure.

On Skull Island, Denham and Helene encounter a young giant ape, Kong Junior.  He’s more playful than his father, but no less fierce when it comes to fighting dinosaurs.  After Denham and Helene save Kong Jr. from a quicksand trap, he defends them from a giant bear, a four-legged dinosaur carnivore, and other grave threats. 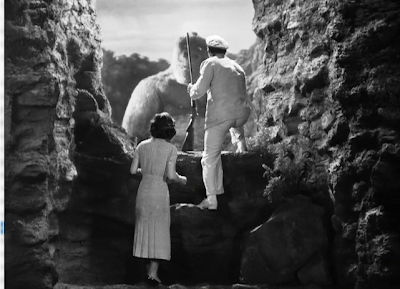 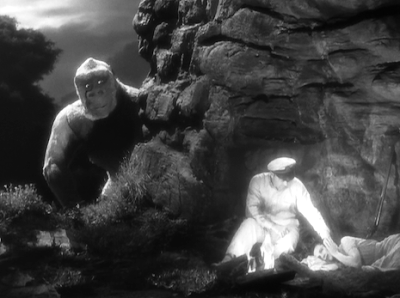 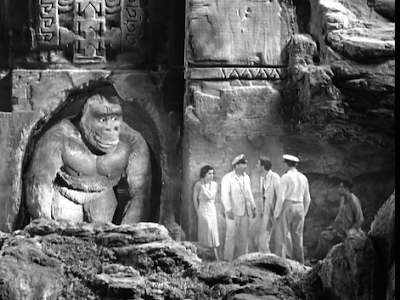 After the giant ape helps Denham retrieve the legendary treasure from a secret temple, an earthquake sinks the island, and Kong Jr. gives his life to save Denham.

While it’s true that the pleasures of The Son of Kong are relatively mild in comparison to King Kong, some are certainly worth noting.  I love the first act in particular, set in a corner of the world where people go to disappear.  There are some great deep-focus shots in the local bar, which sell beautifully the nature of the people living in that environment. 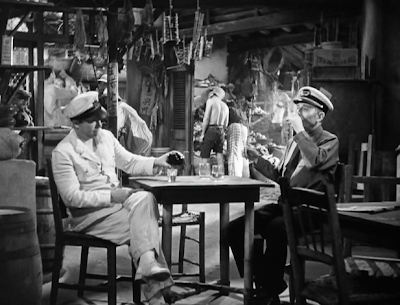 I also admire the fact that the sequel attempts to make a human judgment about what happened to Kong in New York City…a subject the original film did not broach.

Here, Denham admits that he owes Kong’s family “something,” and when he takes care of Kong Jr.’s injuries, he notes that the act is “sort of an apology.”

These moments reveal Denham’s humanity and decency, and also acknowledge the audience’s (quite correct) feelings that King Kong was badly exploited in the first film.  This movie rehabilitates Carl Denham, one might assert, and that’s a worthy enterprise for a sequel.

The stop-motion effects of The Son of Kong are certainly as impressive as those of its predecessor, and the film suffers mainly in the final act when, out-of-the-blue, an earthquake arrives to, literally end the movie.  The earthquake comes from out-of-the-blue, and stops the movie’s development cold, skipping essentially from the beginning of the third act (arrival on the island and discovery of the treasure…) right to the denouement, Kong Jr’s sad death, and the ape’s heroic sacrifice to rescue Denham.

Those valedictory images of heroic Kong Jr. holding Denham aloft above the swirling ocean waves as Skull Island sinks below the roiling surface are arguably as powerful as any image in King Kong, but in some sense they have not adequately been prepared for or built-up to.  The moment of Kong Jr’s death is powerful, but could have been infinitely more so if the film actually spent more than twenty or so minutes in the company of the mighty ape. 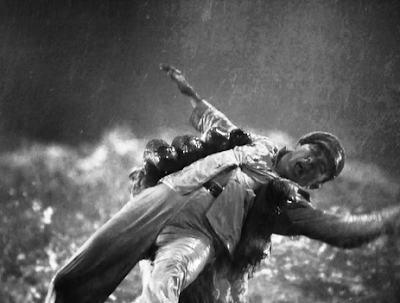 The Son of Kong’s final “happy ending,” that Denham and Helene will marry and share the proceeds from the island’s treasure, also fails to ring true.  Even a huge payday isn’t going to take away a grand jury indictment for Denham.  Plus, Carl has once again looted Skull Island for a resource or treasure by which he hopes to profit…an act which in some sense hampers his character’s development and maturity.  He's still, even after everything that's happened, a profiteer.

But taken in total The Son of Kong is a charming little monster movie, a good dessert after King Kong’s main course.  The sequel boasts some real humanity, and represents a turning point in the Cooper/Schoedsack saga because it is the first big ape film to suggest sympathy for the central animal, and to recognize that the exploitation of natural resources like Kong results only in destruction for everyone.

Also, I must admit that on a personal note, I get a kick out of one idea in The Son of Kong that is often not even considered in terms of sequels.  In essence, this humble movie acknowledges that King Kong was the main event, and that this is a smaller, perhaps less important story in the same universe.  That kind of modesty is, at the very least, refreshing.  It also seems realistic, to some degree.  Sequels traditionally get bigger and bolder, and more outrageous.

But how do you create a sequel bigger than a giant ape climbing the Empire State Building?

I submit that The Son of Kong’s human, if small potatoes approach, works just fine.
at November 23, 2017