Saturday Morning Cult-TV Blogging: The Lost Saucer: "Return to the Valley of the Chickaphants"

What is a chickaphant? Well, it’s a giant chicken-elephant hybrid, of course. Or more accurately, it is an animal with the legs of a chicken and the head of an elephant.

In this episode, the lost saucer’s “year-o-meter” breaks down again, and the spaceship lands in a jungle that looks very familiar to the passengers. It turns out they have all been here before. In fact, they last visited this locale 700 years ago, and are blamed by the current caveman populace for the down-fall of their society.

The cavemen capture Fi (Ruth Buzzi) and make her sweep their cave with a broom, which necessitates a rescue attempt by Fum (Jim Nabors).

Meanwhile, a baby chickaphant boards the saucer after hatching, and its mother comes looking for her wayward clucker. 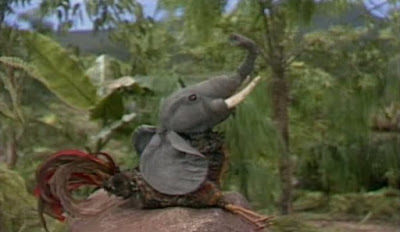 In a funny way, “Return to the Valley of the Chickaphants” anticipates the plot-line of The Lost World: Jurassic Park 2 (1997) since it features a baby monster captured by protagonists, and its mother’s quest to get it back. As you may guess, however, the productions aren’t exactly comparable.

There’s not much else to note about this episode, except that it probably isn’t the series’ finest hour.  Despite this fact, I’d very much like to see a full, official release of the series, so I can continue blogging it here on Saturdays.
at November 04, 2017