In “The Time Trap,” Grod the Gorilla invents an “interspatial time conveyer” to raid various historical time periods.  Aquaman and Apache Chief travel together through time -- 70 million years into the past -- to prevent Giganta and Black Manta from plundering historical sites.

But it is all a trap! Our heroes are left stranded in a prehistoric age.

Grod and Solomon Grundy, in turn, tramp Batman and Robin in Ancient Rome. 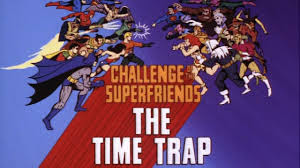 As its title suggests, “The Time Trap” concerns a crime spree through time itself, as the Super Friends pursue agents of the Legion of Doom, throughout history.

Intriguingly, the presence of the Super Friends in epochs past doesn’t seem to impact or pollute our timeline. Thousands of Roman citizens see Superman fly down into a Colosseum, fend off a tiger, and rescue Batman and Robin.

And miraculously, no Roman poet or politician ever wrote or spoke of such a remarkable and spectacular occurrence. 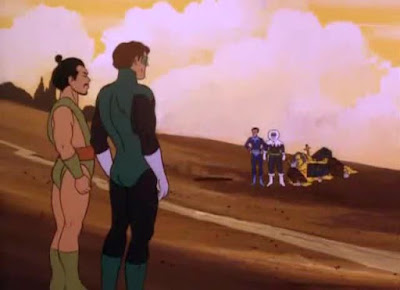 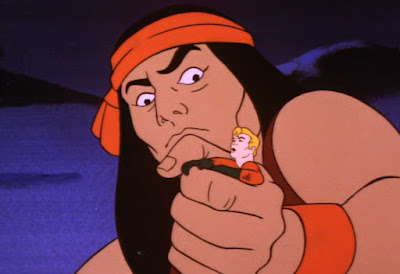 Actually, Superman is out of action for most of the episode, before performing that heroic rescue. The episode writer sends him off to “Check the perimeter of the Milky Way to check things out.”

Yep, that’s a mission that could take a log time.

The baffling thing about “The Time Trap,” and many Challenge of the Super Friends episodes, actually, is that the series straddles so arbitrarily the line between stupid and clever.

On the clever side, consider Aquaman’s radio/walkie-talkie trick for a moment. He realizes that it runs on a nuclear battery (!) with a life of 100 million years. So if he buries it in prehistory -- in the exact spot where the Hall of Justice will be built -- then in the 20th century, it will still send out a signal.

The stupid part is the timing, and how it plays out. The Hall of Justice has been around for some time, and it seems like the nuclear battery would have been detected earlier in the time line, rather than at the exact point in the timeline that the Legion of Doom is launching its time raids. After all, the walkie-talkie has been there since the prehistoric age.

Once more cataloging our familiar lines of dialogue, I see that this episode has Captain Cold barking “That’s what you think, Green Fool,” to Green Lantern. And Robin comments on “Holy Vanishing Acts!”
at November 14, 2017

Email ThisBlogThis!Share to TwitterShare to FacebookShare to Pinterest
Labels: 1978, Challenge of the Super Friends, JLA Week