In “Tarzan’s Trial” the alien flying saucer that once visited the jungle returns. It sends out air ships piloted by robotic minions to abduct Tarzan.

Tarzan is forced to submit to a memory scan and a dangerous experiment. In particular, a computer probes his memories so that it can transfer his abilities to the new leader of the aliens. The alien believes that Tarzan's physical and mental capacities would endow him with everything he needs to be a great hero.

Fortunately, Tarzan’s memories are returned to him, and he is able to defeat his extra-terrestrial enemies. 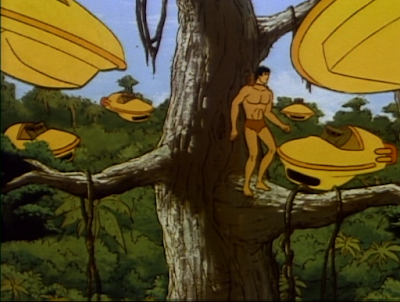 Seriously, Tarzan undergoes a memory scan in this episode, and his thoughts -- visualized as clips from earlier shows (such as “Tarzan’s Rival”) -- are displayed on a screen to represent his cleverness, agility and cunning. Only about sixty percent of the material in the episode is new. 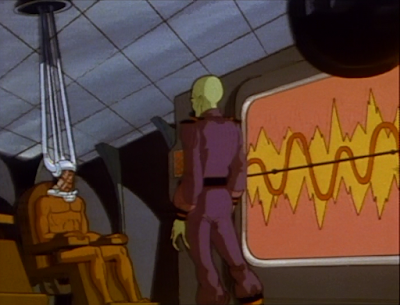 Worse, Tarzan doesn’t prove himself victorious in a compelling way. Instead, the alien leader’s body “rejects” the foreign memories, and return, apparently, to Tarzan.  I didn’t realize that memories can leave the brain, fly away and, failing to find a home, fly or migrate back to their original owner. 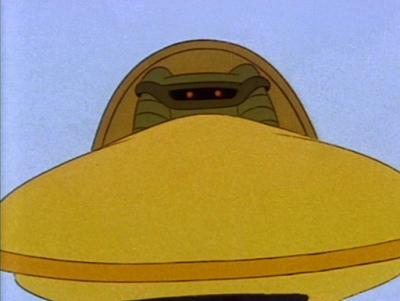 The message of “Tarzan’s Trial” is simple and straightforward. The alien leader erred when he attempted to become just like Tarzan. Instead, we all must learn to “appreciate our own talents.”

Next week, the final Tarzan episode of season one (and the last episode I’ll cover for the time being): “Tarzan, the Hated.”
at February 18, 2017