We now move from one of the best Logan's Run episodes ("Crypt") to one of the absolute worst.

In "Fear Factor" -- a title that presages a popular reality TV series of the 21st century -- our intrepid heroes Logan (Gregory Harrison), Jessica (Heather Menzies) and REM (Donald Moffat) come across a beautiful estate in the middle of nowhere, and also a strange woman writhing around on the grounds in mortal fear. She seems to be suffering from what REM diagnoses as "mind-numbing trauma."

Logan, REM and Jessica return the woman to the facility. They learn it is a mental hospital where the lead psychologist, Dr. Rowan (Ed Nelson) is a psychopath himself. As the leader of the "Inner Circle," he controls all the inmates (here known as "menials") as well as the doctors at this "convalescent" sanitarium by forcing upon them virtual lobotomies, crushing their "militant" independence with his own thoughts.

Meeting Jessica and diagnosing her as a revolutionary, Dr. Rowan feels she's a natural for the procedure. Logan and REM attempt to intervene, but are dropped into a basement survival track, an obstacle course which includes a wind-tunnel and an area where fireballs are hurled at them. When they survive these trials, Rowan attempts to recruit Logan, but he'll have no part of it.

Finally. Logan teams with another psychologist, Dr. Paulson (The Fantastic Journey's Varian, Jared Martin!) to topple this odd society. He does so not a moment too soon, because Dr. Rowan wants to raise an army of re-programmed individuals...literally, since he has a machine that can accelerate the growth of any human.

At the end of the day, REM -- stating my feelings about this episode perfectly – notes: "I've had enough of this place.”

I don’t blame him a bit. 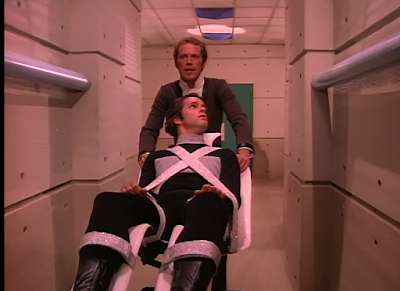 My problem -- as I've elaborated upon before in my reviews of the series -- is this recurring and absurd notion that some little enclave of society like a lunatic asylum could continue to exist unimpeded after a nuclear war. After hundreds of years. Where does this asylum generate its power? (Remember, there's no power grid). Yet this facility has heat; it has light; it is technologically advanced and it looks exactly like a 20th century asylum...out in the middle of nowhere.

I just find that these kind of stories are unsupported from the standpoint of rationality. Where does this clinic get patients, anyway? From runners who happen out of the City of Domes once in a blue moon?  And how are the doctors trained? What medical schools do they attend?  Dr. Rowan notes that he has picked Dr. Paulson to succeed him, as though it is a great and prestigious honor.  How many apprentices did he have to choose from? 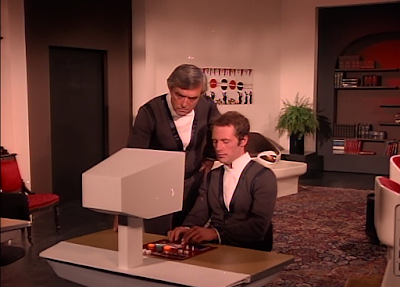 And why would a mental sanitarium have a basement obstacle course that shoots fire-balls and blows heavy wind at patients?  Again, this would seem to require a lot of power, and it’s doubtful to me that a pre-holocaust facility would have had this kind of room.  There’s also a trap door in a corridor that drops people into the fire/wind tunnel. 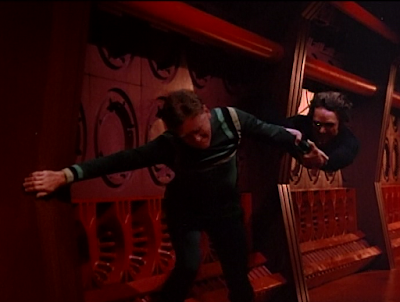 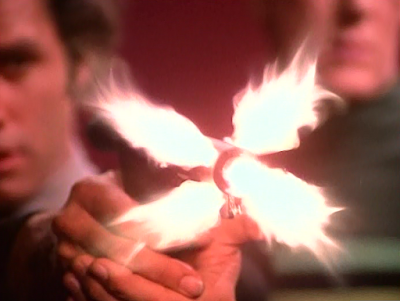 In short, there’s just no logical underpinnings for this tale.  At the very least, we might ask, who mows the lawn at this place, and with what equipment? 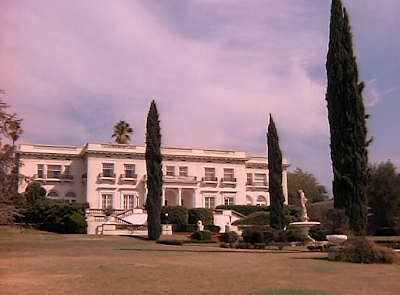 Also, the Star Trek variations are growing old. There was a Logan's Run version of "Charlie X" ("The Innocent"), a Logan's Run version of "The Enemy Within" ("Half Life") and now this is Logan's Run's version of "Dagger of the Mind." In that tale (which, frankly, wasn’t very good), a mad scientist, Dr. Adams (James Gregory) was experimenting on the minds of mental patients. Here Rowan is doing the same thing, though at least he has a motive: world conquest. He wants to build an army.

The most intriguing aspect of the episode is the treatment of the Jessica character. She is characterized by Rowan (and Logan) as a fiery rebel and independent thinker, which sounds more like Agutter’s interpretation of the character, from the 1976 movie. Here, Jessica, who was part of the underground in the City of Domes, notes that “If people think for themselves, it’s a threat to the system.” 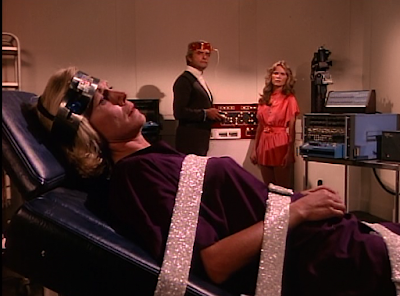 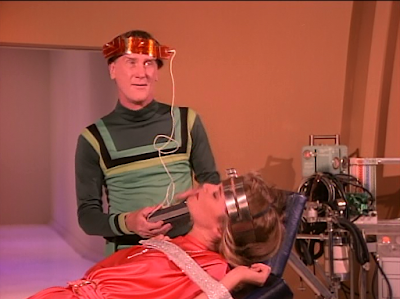 To Rowan, this kind of thinking is indeed a threat, and he plans to destroy Jessica’s mind. It’s clear he takes a special delight in destroying her, because she has questioned him.  This plot would have more power if we had seen more of Jessica’s “fire” in the actual series. Already we have seen her immediately buy into an illusion of Sanctuary (“The Collectors”), for instance, which doesn't say a lot for her critical thinking..  She has not been written as the powerful rebel that the character originated as, which makes the story-line in “Fear Factor” surprising, but welcome.

Looking across the Logan’s Run catalog, one can see how several stories all fit the same thesis, of advanced and complex states that should be helping people be better, but don’t help to do that at all. Instead, they  only subjugate or enslave people. We’ve seen the computer installation of “Man out of Time,” an empty and baffling relic of another age, the bunker for psychic research (“The Innocent”), the machine in “Half-Life” and now the asylum in “Fear Factor.”  Many of these tales display a distrust of facilities/installations that are designed explicitly to aid and heal. This is perfectly in keeping with early 1970's dystopian cinema, which often involved failed states, and failed state apparatus.

But what doesn’t make sense -- in all these tales -- is that these facilities keep operating independently centuries after the holocaust, still receiving power, personnel, and with technology still functioning.