In “Tarzan’s Return to the City of Gold,” Tarzan rescues a young man, Orando, from a wild rhinoceros.

He soon learns that Orando is attempting to prove himself a man, and undergoing a rite of passage.

Tarzan also learns that Orando is the brother of Thia, from the city of Athne.  He resolves to return the thirteen year old boy home.

Before that can happen, however, Tomos -- the major domo of  despotic Queen Nemone -- captures Orando and takes him back to the city of Gold: Zandor.

Now Tarzan must travel to Zandor and seek the help of his friend in Nemone’s guard, Phobec.  But Nemone is bound and determined to get her hands on Tarzan. 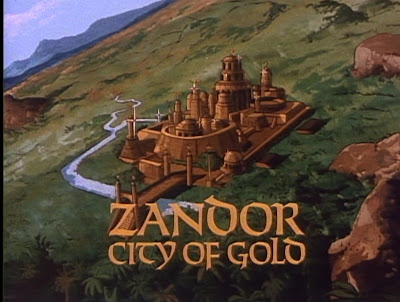 This sequel to Filmation’s first Tarzan episode of the season is not as strong or as involving as some of the other recent episodes I’ve written about, in part because it feels like a rehash. It may be a little bias on my part too. I will readily admit I have a hard time staying tuned to all the politics between Athne and Zandor, and with names like Phobec and Tomos and Orando.

Also, I don't typically like stories of this type, where villainous but beautiful princesses continually lust after a man.  I've seen it too often, on Filmation's Flash Gordon for instance.  I find it outdated and sexist, for sure. 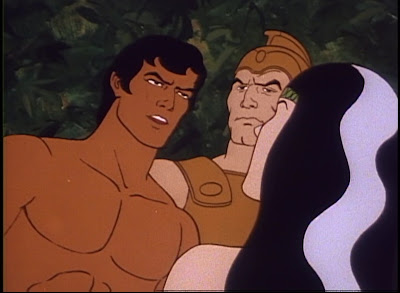 Still, there is an attempt to move the story of Zandor forward a bit in "Tarzan's Return to the City of Gold," and I do credit the episode with that feat. Here, by the end of the show, Nemone promises to change her behavior, and be a more just queen.  She amends her tyrannical ways, and seems to take to heart Tarzan’s counsel.

But otherwise, the story seems like a whole lot of running around, getting captured and held in dungeons, and more running around.  The episode’s final (moral) statement involves Orando’s journey.  By realizing your mistakes you go a long way towards growing up. 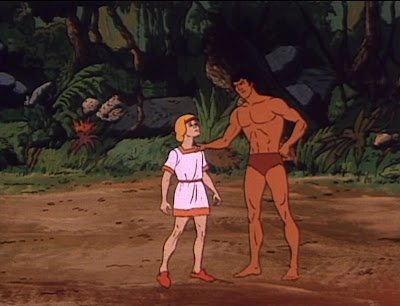 Next week’s episode is an improvement: “Tarzan and the Strange Visitors.”