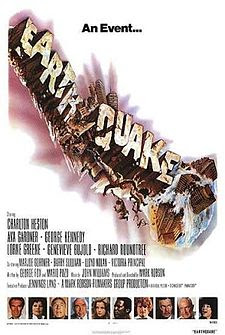 It’s no secret that, of late, I’ve been experiencing a resurgence of interest -- a love affair of sorts, I guess you could say -- with the disaster films of the 1970s.

The Poseidon Adventure (1972) and The Towering Inferno (1974) hold up beautifully, for example. Each of those Irwin Allen-produced films concerns more than chaos and wreckage. These are films about the human spirit, and the drive that compels us to keep fighting when all hope seems lost.

My love affair with the genre, however, hits a speed bump with this week’s featured film, 1974’s Earthquake.

film written by George Fox and Mario Puzo and from director Mark Robson simply isn’t in the same league as the efforts I note above.  Instead, Earthquake is a meandering, largely suspense-less effort that suffers from the fact that the action is too spread out, and therefore tension is sacrificed.  A ship at sea and a high-rise on fire are largely inescapable, and concern people with nowhere to run, nowhere to hide.  Earthquake’s central disaster -- a quake that registers 7 on the Richter Scale -- doesn’t mine any particular location for suspense, and the result is a film that often feels aimless and directionless.

It doesn’t help, either, that high-point of this film -- the earthquake – occurs after the first hour, and leaves very little of excitement left for the film’s denouement.

The acting in the film is pretty terrible too (Ava Gardner, I’m looking at you!), and the character relationships are, at times, baffling.

The last straw, perhaps, is the inconsistent special effects. Some moments during the quake are believably rendered, but other moments -- such as the one notorious moment involving blobs of cartoon blood in an elevator -- are downright ludicrous.

Every genre has its highs and lows for certain, and the disaster film format is no exception.  I believe was spoiled by the quality of The Poseidon Adventure and The Towering Inferno, watched back-to-back. Earthquake is thoroughly pedestrian.

But hey, at least Earthquake is better than The Swarm (1978), right?

“The question is: what in God’s name do we do now?”

In Los Angeles, at the Seismological Institute, a young graduate student analyzes data suggesting a tremor, and then a massive earthquake will strike the city in less than 24 hours. His superiors are reluctant to believe his dire warning, and equally reluctant to report his findings to the governor and the mayor.

When the predicted tremor occurs, however, the seismologists leap into action, and the governor mobilizes the National Guard in response.

But no amount of preparation can adequately safe-guard Los Angeles from the earthquake that strikes next. Rating a 7 on the Richter scale, this quake brings skyscrapers to the ground, destroys free-ways, and sends house careening off the Hollywood hills. Worse, the Hollywood Reservoir Dam crumbles, and parts of the city flood.

Through it all, a determined architect, Stewart Graff (Charlton Heston) in a bad marriage with his boss’s daughter (Ava Gardner) shows determination and pluck.

He rescues a number of people, including his boss (Lorne Greene)m at his high-rise office, and then teams up with a suspended police officer, Lou Slade (George Kennedy) to rescue others in the city, including Stewart’s mistress, Denise (Genevieve Bujold) and her young son, Cory (Tiger Williams).

While Stewart attempts to save the injured and dying, others, including a psychotic National Guardsman (Marjoe Gortner), attempt to take advantage of the disaster for their own twisted agendas. 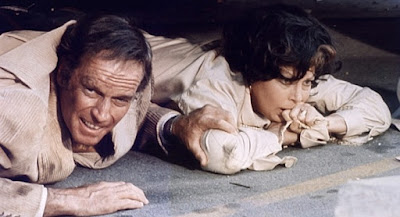 In my reviews of other 1970s disaster films, I’ve concentrated on the notion that films like The Poseidon Adventure and The Towering Inferno thrive on philosophical ideas about their disasters and human nature, not merely the depiction of those disasters. For example, The Poseidon Adventure is about fighting -- to the last breath -- to survive in difficult circumstances; to find the part of God that dwells inside of you, to quote Gene Hackman’s character, Reverend Scott.

And The Towering Inferno assiduously draws a contrast between reckless, money-grubbing Big Business (represented by Richard Chamberlain and William Holden), and the selflessness of San Francisco’s municipal fire fighters, led by O’Halloran (Steve McQueen). One of these forces cares more about profit than people, and it isn’t the firefighters.

Earthquake doesn’t feature a thematic through line or depth that is comparable, alas. Early on, there is much discussion about the responsibility of the seismologists to warn someone in authority about the approaching quake.  Is it right to sound the alarm, knowing that it might start a panic to do so? Is it right to report speculation about a quake, and risk looking like a fool to the media and city politicians if no quake occurs? 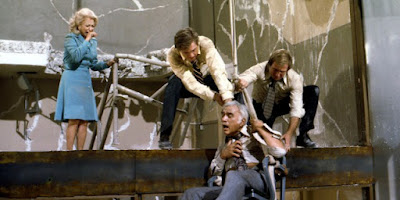 These are truly intriguing points, but after they are raised, the movie totally abandons them.

Without a central location -- or even a galvanizing idea -- to hold the film together, Earthquake quickly proves episodic and underwhelming in terms of its narrative and the hunt for deeper meaning.

We never find out, for instance, why Stewart and Remy hate each other to such a dramatic degree.  They are an endlessly bicker-some couple, and it’s difficult to have much sympathy for either one of them.  Stewart is having affair, for instance, and Remy fakes suicide attempts on a regular basis.  It’s not a terrible surprise when a Biblical flood washes them away in the film’s final moments, given their “sins.”  But the scene isn’t as powerful as it might be because the audience doesn’t really care for the characters.

Other moments in Earthquake are downright bad. For instance, Walter Matthau hams it up as a silly barfly wearing a pimp hat in several unnecessary scenes. Why is his character even in the film? He’s a cartoon character who proves agonizingly unfunny, and -- at the same time -- a walking, talking stereotype.

Similarly, what are viewers to make of Marjoe Gortner’s character, a muscle-bound grocery store worker in the National Guard who chooses the event of an earthquake to address his grievances with a group of bullies, and then attempts to rape Victoria Principal’s character, Rosa?

Is he a psychopath? Nuts? A self-hating body-builder?

More than likely, Gortner's character is present to provide some third act tension. The film badly requires that tension because the earthquake has already struck, and the flood is saved for the denouement. Gortner's "Joad" may also represent a Vietnam Age distaste for soldiers, which was seen in a lot of 1970s movies and TV programs, and today transmits as pretty superficial.

The most ridiculous moment in Earthquake, however, arrives when a group of survivors board an elevator during the quake. The car shakes loose of its cable and careens several dozen floors to the ground. There’s a great shot of the screaming people in the compartment, but then several big ,animated bubbles of bright red blood are superimposed over the footage, and launched at the screen.

For a film struggling so mightily to seem believable, and to meaningfully compete with The Towering Inferno, this a reality-shattering moment of the highest order.

Earthquake gets so little right, actually. Ava Gardner is terribly miscast as Lorne Greene’s daughter and Charlton Heston’s wife. I believe she was only three years younger than Greene at this point, and she and Heston share what can only politely be termed “anti-chemistry.”

Worse, some moments -- like the rescue of Genevieve Bujold’s son from an electrical cable -- make the earthquake seem small and not, literally earth shattering.

But most disappointing of all is the focus on soap opera plotting. Stewart’s promotion, Slade’s disenchantment with the police force, Mile Quade’s motorcycle stunt, Denise’s acting job and other issues are all brought up, but ultimately left unresolved in the face of utter destruction.

I suppose the film could have considered the way man proposes, and God disposes, but even that idea is not enunciated here.

All that established, I should also write that Earthquake features some beautiful matte-painting of the destroyed Los Angeles landscape. 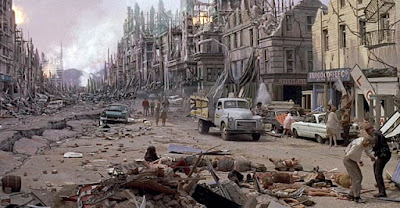 I think that just about the only way this film could truly be described as gripping is if audiences saw it in theaters in Sensurround. I can see how that rumbling effect would add a whole new dimension to the film’s narrative. 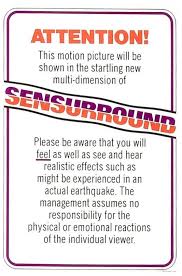 Without the support of this gimmick, Earthquake is rendered, sadly, a completely two-dimensional affair.
at January 28, 2016

Email ThisBlogThis!Share to TwitterShare to FacebookShare to Pinterest
Labels: 1974, cult-movie review, disaster day, The films of 1974