This week, on Space Academy, (in an episode directed by Ezra Stone and written by Don Heckman), a representative from the Federation is en route to investigate the Academy, a facility whose expenses are running high.

The representative, however, is a weird guy named Johnny Sunseed who wishes to free mankind from the technical domination of machines. He also happens to be Gampu's (Jonathan Harris) brother. 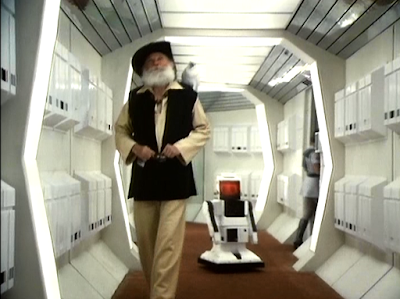 At the same time, a strange sickness is affected many of the students at the Academy. Cadets, (including Adrian) suffer from a "systemic imbalance" that causes "silliness...detachment" and "an inability to do your job correctly." 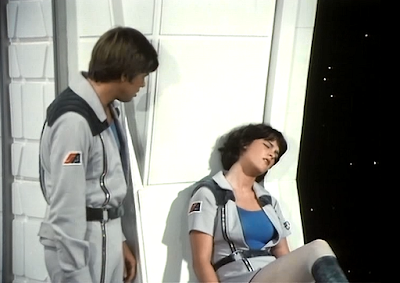 As the Academy nears the space farm (which has been providing food to the Academy commissary...), Paul also goes bonkers while piloting a Seeker. He strafes the Academy in the ship, buzzing between the towers of the Facility in some very nicely orchestrated miniature effects work.

Sunseed checks out the space farm with Peepo (whom he consistently calls Peppo) and proceeds to damage the computer-run gardening system, "overloading" power systems not just at the farm, but on the distant Academy planetoid!

As a result, the Academy drifts on a collision course towards the space farm, but Gampu dispatches Chris (Ric Carrott), Tee-Gar (Brian Tochi) and Adrian (Maggie Cooper) in Seekers 1, 4 and 5, which are equipped with "presser beams." 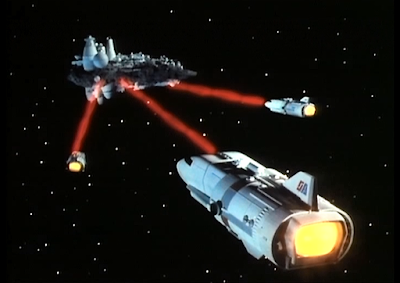 The seekers keep the Academy from smashing into the space farm, while Gampu attempts a psychic link with his faraway brother. It works, and the space farm gets repaired.

Sunseed decides that nature and technology can exist hand-in-hand, and all's well that ends well, to quote a famous writer. 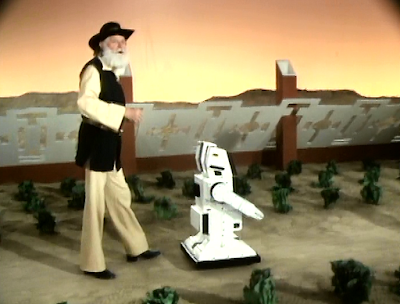 I enjoy watching this live-action Filmation show from the 1970s so much, even today, though sometimes have to laugh at the weird stories. For instance, it's a fairly lousy system that a computer on a planet far away could affect the Space Academy's propulsion and power systems. I mean, there's a ready-made sabotage plan, right there! If you can't attack the heavily armed/defended Academy, find the weak link on the space farm and incapacitate it from there. This reminds me of Return of the Jedi and the fact that the under-construction Death Star couldn't generate its own force field.

Also, it doesn't really seem plausible to me that Johnny Sunseed could be a high-ranking official in the Federation since he despises technology. He's more like a cranky environmental activist than a government official. And why does Johnny Sunseed boast a different name from Isaac Gampu if they are biological brothers? Did Sunseed just adopt his flamboyant-sounding name in adulthood, given his proclivities towards nature? That could have been explained better.

I hate to finish this review, because this is the final episode of Space Academy, a series that I really love, and despite flaws, among the best live-action Saturday morning series ever (behind only Land of the Lost.) I wish I had 16 more episodes to review.