Dramatic changes were in the offing for the second season of Jason of Star Command, as the series became a standalone program, dropped the cliffhanger/serial format, and episode length was increased to fit a half-hour time slot.

There were some character changes in the offing as well.

James Doohan departed the series to fulfill a commitment to appear in Star Trek: The Motion Picture (1979), and he was replaced by John Russell as blue-skinned Commander Stone. Nicole (Susan Pratt) also disappeared without a trace, to be replaced by the alien Samantha (Tamara Dobson). 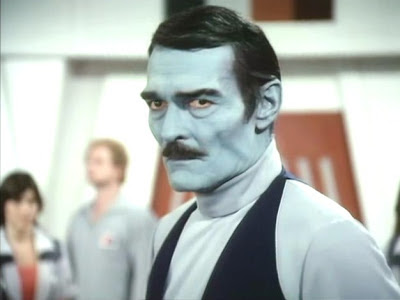 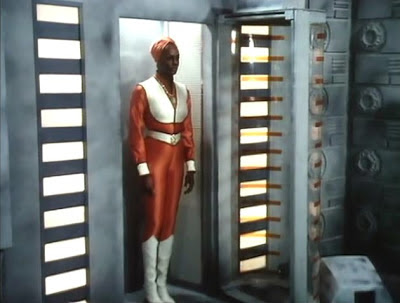 In "Mission to the Stars," the second season premiere of Jason of Star Command, Jason, Parsafoot and their robot sidekicks Peepo and (a re-designed...) WiKi await the arrival of Commander Stone.

But an impatient Jason test-flies a newly modified Star Fire fighter -- the "fastest one this side of Beta 2" -- and accidentally strafes the new Commander as he arrives aboard a Seeker. Stone dresses Jason down, indicating his desire to command "by the book."

"The galaxy is not your personal playground" he scolds Jason. Jason reminds him that he is not officially under Star Command jurisdiction, but seems chastened by his bad first impression.

Before long, a derelict spaceship appears in the close vicinity of the Star Command asteroid, and Jason's unique daredevil skills are required to rescue any crew aboard it after a "destructor" is sent to destroy the wreckage.

Aboard the ship, Jason finds a beautiful, Amazonian woman in cryo-freeze, Samantha (Tamara Dobson).  He quickly awakens her and learns that she is an amnesiac.  All she remembers for certain is that her people were conquered by Dragos.

Jason attempts to rescue Samantha, but is injured when a ceiling beam falls on him. Samantha utilizes super-human strength to save him, and the duo flees the derelict just as it blows up.

But a new threat emerges quickly. Dragos (Sid Haig) has fired a "freeze ray" at Star Command, and it's up to Jason and Samantha to determine the source and disarm the device. 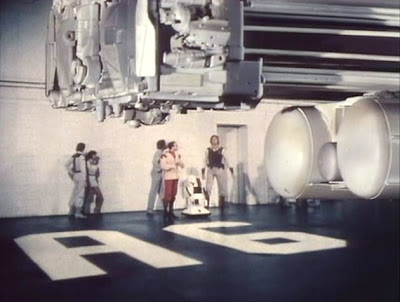 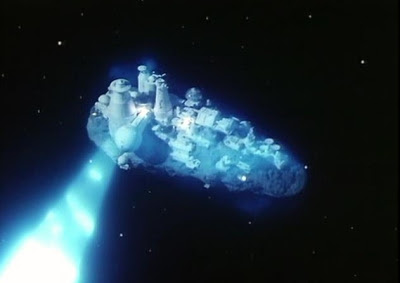 The first half-hour of Jason of Star Command's second season flies by at a quick pace, and introduces new characters Stone and Samantha well. In the former case, Russell makes a strong impression as a more strict, less-friendly commander than Canarvin.  He's a more imposing physical presence, and brings a much-needed sense of tension to the drama.  Doohan's character never really had any individual traits, and since Jason was the star of the show, came off as rather weak.

Although Jason of Star Command often comes off as mindless kid's stuff, without a deeper concentration on action than upon characters, this episode is a happy and distinct change.  Jason and Stone really clash, and the character sparks make the episode more interesting for forty-something adults than some earlier installments.

Samantha also looks like a strong new companion in "Mission to the Stars, and there is a mystery at the heart of her story.

Where did she come from, and how did she get on that derelict?  Is she part of Dragos' trap?

As was the case with the first season, the series is fun, and features some great 1970s era special effects too.  The spaceship and starbase designs are really terrific, and are indicative of a kind of consistent approach to the universe, and to futuristic technology.  The show always looks goods, even if the stories are juvenile.

As a kid, I loved Dragos, the Starfire fighter design and the special effects. But even as a ten year old, I liked Space Academy better. There was more to latch onto in terms of each story. I suspect this helps to explain why I was always more a Star Trek kid than a Star Wars kid.  I loved the hell out of Star Wars (and saw it in theaters 11 times...) but for me, Star Trek ultimately proved superior because there was: a.) much more of it to enjoy (and I didn't have to wait three years between episodes), and b.) Star Trek was more thought provoking on a regular basis.  Star Wars had the unbelievable action, epic sweep and great special effects...but Star Trek had the brains, and to some extent, the heart.

That's roughly the same dynamic you get between Space Academy and Jason of Star Command.