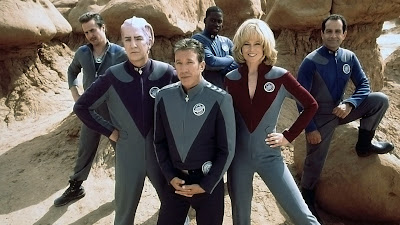 "No particular order, but these are films that have made a lasting impression on me:

2001: A Space Odyssey
Close Encounters of the Third Kind
Star Wars
Raiders of the Lost Ark
Superman (the first Christopher Reeve film)
Jurassic Park
Jumanji
Hitchhiker's Guide to the Galaxy (okay, not as good as the BBC incarnation, but still a favorite)
Galaxy Quest
Planet of the Apes (scared me silly the first time I saw it!)"

There are some new and worthy titles on this list.  I took special note of Superman: The Movie (1978), which I grappled with for my own list, and Jurassic Park (1993), undeniably a classic.  Galaxy Quest is also a beloved sci-fi film, and a great comedy, so it's cool to see it here.  Well done!