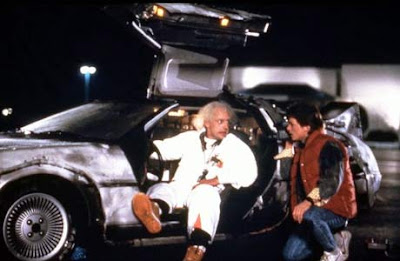 A regular reader of the blog, Robert, makes his list, our first for today, and it is filled with intriguing and unconventional choices.

"Robert’s Top Ten Science Fiction Movies
(in alphabetical order)
Back to the Future (1985): Still as fun and exciting as it was in 1985.
The Black Hole (1979): Crap science but stunning production design and a creepy, Gothic atmosphere. It's almost like a haunted house movie in space.  And don't forget that insane ending.
Children of Men (2006): An incredibly powerful, deeply moving film.  An allegory of our times.
Close Encounters of the Third Kind (1977): Up there with Jaws and Raiders of the Lost Ark as Spielberg's best.  All those faces looking up in wonder.  Spellbinding.
Flash Gordon (1980): Hail Flash!
Planet of the Apes (1968): Best twist ending ever.  A movie featured twice this season on Mad Men!
Starman (1984): Poignant and soulful.  I love the scene in the truck-stop parking lot where Jeff Bridges's alien resurrects the deer strapped to the back of the car.

They Live (1988): An indictment of the Reagan era that still resonates today.

Time After Time (1979): A great cat-and-mouse chase across time.
The Time Machine (1960): Fascinating in that most of the action takes place in a man's back garden--over a period of 800, 000 years."
I just want to say I give serious kudos to a list that includes two dramatically underrated John Carpenter films (Starman, They Live), and pays respect to two incredibly popular films from my generation, Flash Gordon and The Black Hole.  Well-done!