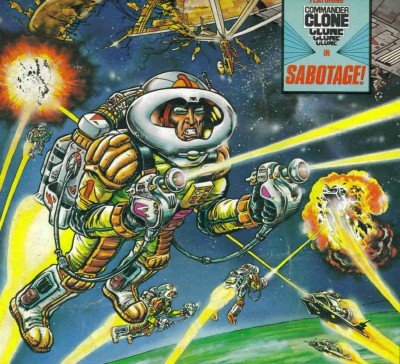 In 1980, The Ideal Toy Corporation (in Newark, N.J. 07105) and Interfun Toys combined to create a series of fun paper-based toys in the mold of Letraset Action Transfers. In particular, the companies released six "adventure sets" that were kind of like colorforms; kind of like iron-transfer shirts. But all in all, these toys could provide kids with hours of fun. I remember 'em well, and - yes - still own several.

These "super rub down action transfer" sets each came in a "sci-fantasy pack" which contained the following materials: over sixty multi-color action transfers, over fifty glow-in the-dark "action" transfers, two starships to cut out, decorate and fly, one iron-on for your 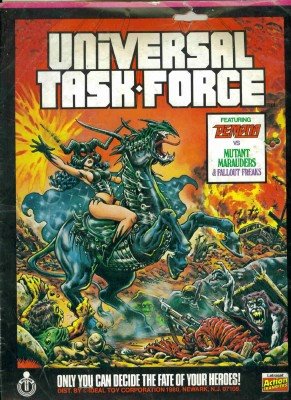 These sets came under the title "Universal Task Force" and featured a diverse group of space heroes doing battle across the universe against villains of all varieties. "Only you can decide the fate of your heroes!" the toy packs blared, and indeed, that was true. There were six sets featuring the Universal Task force in all:

In "Commander Clone: Sabotage!" you could take the Task Force Leader, Commander Clone (and his army of clones) into a space battle against "sinister invaders" called "The Gree" who were attacking giant Solar Conservors over the Eden-like planet of Kabaal!

In Demona: "Mutant Marauders and Fallout Freaks," you were with the mutated (but hot!) femme fatale Demona. "The nerve-endings in her brain warped, twisted, reformed in new connections...till she felt the dark areas of 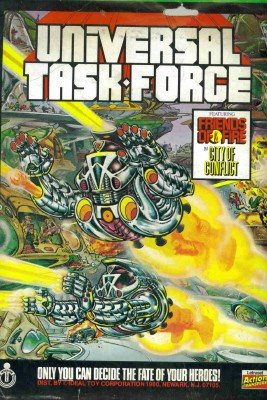 her mind open up! She was still a human, still a woman, but now she had the power of the Dark Forces to command!," the description blared. And her mission was to lead a convoy of "Normals" across a vast desert - a nuclear wasteland (populated by mutants) - to safety.

In "Friends of Fire: City of Conflict," the robot law enforcement team, "the Friends of Fire" (which resembled classic BSG Cylons...) dealt with a riot on Kolos, a "giant city-asteroid" on the planet Kolos following a contested election between the People's Party and the Elitist Party. This "cyborg clean-up crew" had "only one order" programmed into them: "Stop the conflict!" This was the first Universal Task Force set I ever saw, and I was fascinated by it.

Then there were the adventures of other Universal Task Force members: Kaarl The Korrector ("Rampant Reptoids") and The Lasers (Insectae Invasion), though I was never lucky enough to have those, dammit. All in all, I had just four of the six. 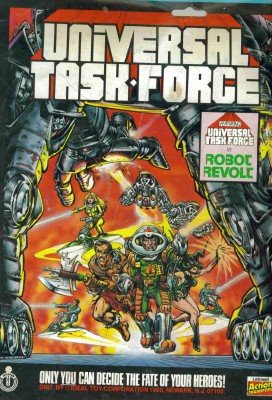 I don't know anybody else who remembers this Ideal Toy franchise from 1980, and even though the writing on the backs of the sci-fi packs admonished kids to "watch out for the further adventures of the the Universal Task Force," they never came.

But heck, when I was ten years-old, I had a lot of fun putting the task force through its paces.