BOOK REVIEW: The Totally Geeky Guide to The Princess Bride 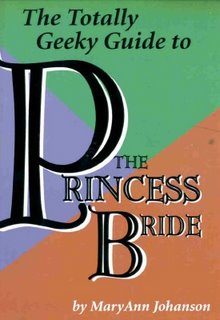 The Totally Geeky Guide to The Princess Bride landed on my doorstep the other day, and I welcomed this film study book with excitement and anticipation.
In part, my enthusiasm is due to the subject matter itself. I remember viewing The Princess Bride for the first time back in the late 1980s - at the Essex Green multiplex in West Orange, New Jersey, to be precise. I saw the movie with my best high school buddies, Bob and Kelly, and I've always harbored nostalgia for it because of the time it arrived in my young life.

Also, The Princess Bride is a significant work of cinematic art because of what it represents in terms of Hollywood trends (and back-trends); in other words: the context from which it arose. It arrived in theaters during the post-Star Wars era in film history (Return of the Jedi having wrapped up the original trilogy in 1983...) and here was a movie loaded with swashbuckle aplenty, princesses, hissable villains, colorful sidekicks, sword-fights and the like.

Indeed, the project could have been sold to unsuspecting film execs as Star Wars-like, right?
But...not so fast! The Princess Bride was and remains a totally different kind of endeavor. As different in tone, in fact, from the Lucas films as one could reasonably conceive. Although The Princess Bride's story concerns "true love," the film itself is not at all innocent or romantic in any sort of traditional sense. Instead, it's actually some brand of highly-observant, post-modern masterpiece...poking fun at and de-constructing the conventions of adventure and romance films at the same time that it wraps itself in the dressings of one. And yet, the heart of the film is genuine; it is about true love. There's a delicate alchemy at work in The Princess Bride; one that's never been repeated...or surpassed.

I'm also enthusiastic about this book because it's written by a colleague I truly respect and enjoy reading. In fact, I make it a ritual to read her reviews. MaryAnn Johanson is the author of The Totally Geeky Guide to The Princess Bride and also one of the most astute movie critics working today (visit her site, The Flick Filosopher to see what I mean...). So I knew I should expect great things from this text, and wasn't disappointed. Johanson has penned a virtual treatise on the reasons The Princess Bride is a great film; but more significantly than that - why Generation X'ers and "geeks" have adopted the film and hold it close to their hearts even two decades after the film's premiere.

Johanson insightfully concludes that fans of the film are a "special breed of cynics who are thwarted idealists." In other words, that the movie melts the hearts of even the most hardened intellectual. The film functions on two levels: poking fun at its purely innocent form; the fairy tale; and also - ultimately - serving as one itself. The Princess Bride is commendably self-reflexive in this sense, and the film's structure (which involves a grandfather reading the fairy tale to his sick grandson...) reinforces this notion of a two-prong or multi-layer tale. The Princess Bride gets under the skin of many post-Watergate, post-Vietnam X'ers because - like a certain gent named Mulder - we want to believe in true love, justice, and so on. Occasionally, when our defenses are down, we do believe, and somehow the movie knows precisely how to pluck that string...
Those of you who have read my work in print know that for me context is critical when discussing a film. You can't really appreciate or "know" a cinematic work of art without understanding the history from which it sprang. To my delight, Johanson makes her case about The Princess Bride by pointing out how VCR technology played a crucial part in making the film a "cult" hit in the late 1980s and beyond. She writes about the manner in which VCRs (and now DVD) have permitted film scholars to approach the film like a work of literature "that can be examined and considered from all angles."
Really, that's what this book accomplishes in spades.

The author has peppered the book with new and delightful interview snippets from the likes of Bride stars Mandy Patinkin and Chris Sarandon, and - in a virtuoso turn - even developed a fascinating (and so far as I can tell, totally fresh...) comparison between Princess Bride and Casablanca. Nor did I expect a thoroughly illuminating section that compares and contrasts Pitch Black's Riddick to Bride's Westley, but it tickled my fancy and made an important point. Yet what I admire most about this Geeky Guide is Johanson's clarity. She doesn't wander off on tangents or forget her

central thesis about the film and why it conjures such magic upon my generation. Instead, she applies her customary razor wit to her central argument and slashes any fat that doesn't belong, thus making the work a short, sweet and thoroughly satisfying read. In The Totally Geeky Guide to The Princess Bride

, Johanson has metaphorically "stormed" the castle of modern film criticism; explaining how a post-absurd, post-innocence fairy tale successfully captured the imagination of a generation of cynics (herself included). The movie's feat is an impressive one; yet so is Johanson's ability to excavate and pinpoint the qualities underlying the film's long-lasting appeal.

Her "totally geeky" guide thus accomplished a very important mission: it made me want to pop in my DVD copy of The Princess Bride and experience the adventure, romance and humor all over again. This time, with fresh eyes, and new things to think about.
at September 27, 2006