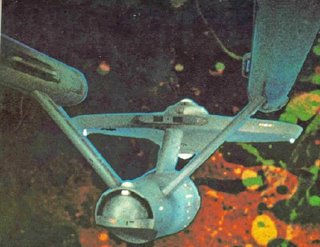 While I toiled on my book last week, some of my buddies e-mailed me links to a news announcements on the net about the return of Star Trek. I'm sure you've read about it by now.

Anyway, the plan is to give Star Trek (The Original Series), which celebrates its 40th birthday in thee days, a dramatic face lift. All 79 hour-long episodes from 1966-1969 will be re-released into syndication in high definition, featuring newly created, state-of-the-art computer-generated effects.

Call it Star Trek: The Special Edition. The first re-crafted show appears on the air the weekend of September 16. The episode? The classic "Balance of Terror," which chronicles the Enterprise's first encounter with the Romulan Star Empire at the border of the Neutral Zone.

The most noticeable change will be redoing many of the special effects, created with 1960s technology, with 21st century computer-generated imagery (CGI). Upgrades include:

Space ship exteriors – The Enterprise, as well as other starships, will be replaced with state of the art CGI-created ships. The new computer-generated Enterprise is based on the exact measurements of the original model, which now rests in the Smithsonian Institution in Washington, D.C.

Show opening – The Enterprise and planets seen in the main title sequence will be redone, giving them depth and dimension for the first time.

Galaxy shots – All the graphics of the galaxy, so frequently seen through the viewscreen on the Enterprise's bridge, will be redone.

Exteriors – The battle scenes, planets and ships from other cultures (notably the Romulan Bird of Prey and Klingon Battle Cruisers) will be updated.

Background scenes – Some of the iconic, yet flat, matte paintings used as backdrops for the strange, new worlds explored by the Enterprise crew will get a CGI face-lift, adding atmosphere and lighting.

The cranky old fan in me - the one who's loved Star Trek just the way it is for my whole life - isn't exactly jumping with joy. This is a tough thing to explain in the age of computer-effects, but those resourceful if primitive effects on Star Trek are like old friends. I like how they look; I like how they sound. The retro-sixties feel is part of the fun of watching the show. I enjoy the way Nomad hovers around the bridge in "The Changeling;" the way Ruk disintegrates in What Are Little Girls Made of"; the manner in which the Enterprise plows into a space amoeba in "The Immunity Syndrome"; and how Stratos looks in miniature in "The Cloud Minders." These shots are amazingly cool. My wife and I watched the entire original series on DVD about a year ago, and you know what? It's so damn good (still...) that the aged effects don't detract a bit. In fact, they merely add nostalgia.

So, all right...these effects aren't always great; and they certainly don't always hold up. But they're part of the series' original production design; part and parcel of the Star Trek "look" that has inspired millions (if not billions). I imagine the artists working on the re-do will be mindful of this fact but still, I worry. I hope they also don't plan to re-tool the sound effects, which are so distinctive as to be split-second recognizable.

Yet, on the other hand, the part of me that just adores Star Trek and wants to see the series regain some of its old popularity with youngsters, is thrilled by this development. It'll also be nice to see the Enterprise that I love (no bloody C, no bloody D...) back in action "one more time." Who could resist such a thing? I just hope the spfx guys remember to treat NCC-1701 "like a lady." Because she is a lady, and we all love her...

So, bitch about at as much I probably will, I'm still going to watch. What do you think? Is this craven commercialism at its worst, or will Star Trek: The Real Special Edition simply be the thing to re-ignite and inspire fan devotion?
at September 05, 2006