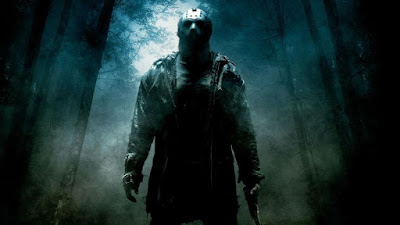 Ranking the Friday the 13th Movies: Worst to Best.
To celebrate Friday the 13th, let's take look back at the movie slasher saga,  which has been too long absent from our screens
12. Friday the 13th Part V: A New Beginning (1985): This movie totally bungles the second movement of the Tommy Jarvis trilogy (IV, V, VI), and gives us not a reappearance by Jason, but rather a Jason impostor.  That sounds like it could be a reasonable narrative if handled correctly, but it is never explained how the impostor manages his Jason-like survival rate. He gets hit by a bull-dozer, and then stands back-up to continue fighting.  How this possible for a mere mortal man?  A sub-standard, really terribly movie in the canon.
11. Friday the 13th Part VIII: Jason Takes Manhattan (1989): So, Toronto substitutes for Manhattan here, and Jason only reaches it in the last act…for a few minutes. Adding an insult to that injury, the movie seems to `believe that New York City utility companies flush toxic waste through the sewers every night. At the film’s conclusion, Jason gets caught in the toxic flood and is reverted to the form of a child.  WTF? The death scenes are ludicrous, including one set in a disco aboard a cruise ship, where a female victim dies, literally, because she has no attention span. If she just kept her eyes on Jason, she might have survived. Instead, she can’t manage that feat, and he just appears in front of her and kills her. This character suffers from a serious movie malady: no peripheral vision.
10. Jason Goes to Hell: The Final Friday (1993): The fun of a Friday the 13th movie is seeing a big, hulking slasher in a hockey mask hack people up with a machete. So what does this movie do? It eliminates Jason’s body and turns the slasher into a body-hopping ghoul. What is this, The Hidden 2?  And then there’s some serious and lame retconning of the overall story. For example: the Voorhees house.  Jason and his mom had a house that everybody knew about?  That still exists?  That is well-furnished? That has a mail box?  Are people sending mail there? If so, then why was Jason living in a shack in the woods in Friday the 13th Part II?
9. Freddy vs. Jason (2003). Jason is Freddy’s patsy for the first part of this film, and then reveals, oddly, that his mortal fear (and Kryptonite, essentially…) is water. This revelation occurs even though we have seen in Jason in functioning ably in water attacking people -- without fear -- in virtually every Friday the 13th movie since 1980. Whatever.
8. Friday the 13th Part III in 3-D (1982): Folks my age have a lot of nostalgia for this particular movie, but it doesn’t hold up well outside that context. The stoner characters (who look like Cheech and Chong) are cringe-inducing, and the 3-D effects (with everything flying at the screen) look low-rent and ridiculous.  All the characters are dumb clichés, so the third time’s not the charm for the series. Now Jason moves and acts more like Michael Myers than an original character.
7. Friday the 13th (2009): The reboot plays like a Friday the 13th “Greatest Hits” mix tape, taking good ideas from many of the individual entries and working them into one intriguing narrative. That’s not a bad approach -- hitting all the visceral hot spots of the saga -- but the film somehow comes across as shallow and lacking in any real sense of fun.
6. Friday the 13th Part IV: The Final Chapter (1984): Not a great entry in the saga, but a fun and generally quite popular one. The film demonstrates a love for the horror genre by making young Tommy Jarvis (Corey Feldman) a make-up artist.  He uses that skill to good effect to decapitate Jason in the last act (while pretending to be a young Jason).  An eminently watchable entry, although nothing fresh or exciting in terms of storyline or effects, really.
5. Friday the 13th Part VII: The New Blood (1988): This impossible-to-resist entry is basically Jason vs. Stephen King’s Carrie. Accordingly, Jason falls victim to a slew of telekinetic trickery, well-orchestrated.  The first two acts aren’t great, but the last act is a hell of a lot of fun as a monster of the physical realm, Jason, does pitched battle with a heroine of the psychic realm.  Much more entertaining than it has any right to be.  My favorite murder also occurs in this film: the sleeping bag death.
4. Jason X (2002). Are you surprised that this one made it so high on the list?  Well, can you think of another Friday the 13th movie that is so relentlessly inventive, and which plays so wittily on the tropes of the series? Sure the movie’s premise is ridiculous, but it knows it is ridiculous.  The scene with Jason encountering nubile hologram characters who just “love” premarital sex is absolutely priceless and alone worth the price of admission.
3. Friday the 13th Part VI: Jason Lives (1986): This entry turns Jason the slasher into a full-blooded supernatural monster (revived from the dead by lightning) to good and often funny impact. The James Bond-style opener, Jason’s encounter with survivalists, and a cameo appearance by Sartre’s No Exit are just few of the moments worth treasuring.
2. Friday the 13th Part II (1981): This film pits a smart, resourceful child psychologist, Ginny (Amy Steel) against Jason’s developmentally-arrested “retard” (to quote the film; not my words). Lean and efficient, the film also introduces Jason’s mom fixation
1. Friday the 13th (1980): Still the best of the bunch, thanks to a smart screenplay, and some stand-out scares (including the final sting-in-the-tail/tale). Here (as in all Jason films), it is suggested (through the presence of a storm) that the killer is a force of nature. Similarly, there’s a Garden of Eden/Snake in the Garden metaphor at work at Crystal Lake.
at January 13, 2023

Email ThisBlogThis!Share to TwitterShare to FacebookShare to Pinterest
Labels: Friday the 13th