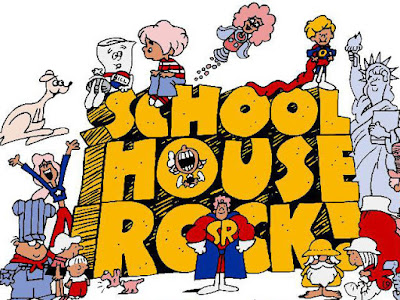 Today, I credit three diverse and valuable sources with my ability to write well.

The first is my study of Latin. I minored in the subject at the University of Richmond and have never regretted it. Vēnī, vīdī, vīcī.

The second source is a deep stable of wonderful and inspiring English professors; stretching from my grade school experience through the university years.

And, last but never least, is...Schoolhouse Rock, the ABC animated musical series (1973-1986) that demonstrated -- in superbly entertaining fashion -- how to accurately utilize conjunctions ("Conjunction Junction"), adverbs ("Lolly, Lolly, Lolly Get Your Adverbs Here,") interjections ("Interjections!") and more.
Yep, these "lessons" were all facets of the series' memorable class on "Grammar Rock."

Network executive Michael Eisner approved the project for broadcast during ABC's Saturday morning schedule, and accordingly three minutes "bits" were cut (over producer protests!) from the entertainment programming (such as Scooby Doo) to make "elbow room" for these educational and amusing shorts.

The series' mission: "to link math [and other subjects] with contemporary music...[so] kids will breeze through school on a song."
Over roughly a dozen years, Schoolhouse Rock accomplished that task in spades. It offered a deep, amusing, highly-addictive and toe-tapping TV curriculum in a variety of academic subjects.

Celebrating the bicentennial in 1976, Schoolhouse Rock's "America Rock" featured such shorts as "I'm Just a Bill," (following a bill's progress from idea to committee to law or veto...), "Elbow Room" (about the American expansion West after the Louisiana Purchase..."), "Mother Necessity" (about American ingenuity and inventions...), and "The Preamble," which concerned the specific words and meanings of the U.S. Constitution.

In the subject of math, audiences were offered "Multiplication Rock," with shorts called "My Hero, Zero," "Three is a Magic Number" (a personal favorite that I used to sing to my son, Joel, when he was a baby) and "Figure Eight."

In "Science Rock," youngsters learned about "Electricity, "Electricity" and "Interplanet Janet" (a ditty about the heavenly bodies of our solar system.)

For Generation X (my generation) specifically, these shorts (particularly the catchy tunes) are nothing less than indelible.
Here's to half a century of Schoolhouse Rock!
at January 06, 2023

Email ThisBlogThis!Share to TwitterShare to FacebookShare to Pinterest
Labels: 50 Years Ago