The cops may think that the murderous doll is responsible for all the killings, but Universal’s marketing department has slaughtered many of M3GAN's best surprises. Though M3GAN — an almost-parody of killer doll movies — features many clever touches, the movie feels like a rerun, since many of the best sequences have already been captured and shown in coming attractions for months.

On the one hand, M3GAN's twisted dance before eviscerating an enemy was one of the sequences that gave the film a cult following even before its release (and may have contributed to the rumored R rated version being edited down to a more teen friendly, bloodless PG-13 — at least according to bloody-disgusting.com). On the other, the movie loses its mystery when the audience knows the entire plot.

Workaholic Robotics genius Gemma (Allison Williams) loses her sister to a tragic accident and finds herself taking in her despondent niece Cady (Violet McGraw). Parenting does not come naturally to the engineer, and she merges her career and family life by treating Cady as the test audience for her new product, an AI doll named M3GAN. The robot child is not only meant to substitute as a friend for lonely children, but to take up parenting duties as well. Cady bonds with the doll — who resembles an anime version of Mary Kate and/or Ashley Olsen — while the doll strives to keep Cady safe and happy, even if it means bludgeoning a few people to death. 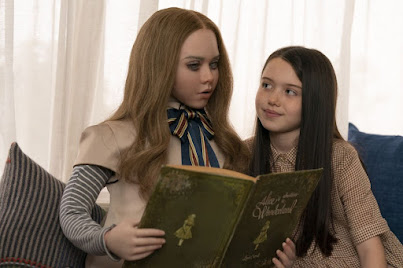 M3GAN returns to the well originally excavated by Mary Shelley in the early 19th century. Like Dr Frankenstein, Gemma plays God, and due to her laziness and rush, she creates a dangerous being she can't control. Like the "good" doctor, Gemma is overly dependent on technology — in one scene she can't even comfort her niece with a book, because the reading app hasn’t updated yet. M3GAN's flaws are programming issues, caused by Gemma. The robot just does what she was written to, without parameters (or a soul, for that matter).

Director Gerard Johnstone, who helmed the clever horror/comedy Housebound, plays with the horror conventions right away by quickly introducing us to a displaced child, teasing us with jump scares, and presenting the obvious future victim pool like a menu. He sprinkles in the clichés as if to tickle the audience. He continues that with visual homages to Terminator 2, Child's Play, E.T., and Wes Craven's Deadly Friend. Johnston appears to be joshing the genre by making M3GAN so ridiculous — the dances before the deaths, the Freddy Krueger punchlines, the SINGING (not just any tune, but "Titanium" for God's sake) — that the audience knows this a lark, not a fright fest.

The script by Akela Cooper (based on producer James Wan's story), hints at a storyline where the doll's rage comes from her connection to the despondent child, but never gets around to exploring that option. Though horror movies such as The Hand and Monkey Shines have used a killer monster as a surrogate, it would have been intriguing to explore the pain of a child being neglected.

The cast is in fine form. Williams gives the audience someone preoccupied and unqualified for parenthood with an arc that shows her taking responsibility for her mistakes. McGraw is never cloying as the little child. Amie Donald (as the body) and Jenna Davis (as the voice) play M3GAN over the top, which works thanks to the film's already goofy tone.

M3GAN's success at the box office has proven she's striking a chord with audiences. The killer is saucy and sassy, and her ambitions are pure. In this precarious world, there seems to be a hunger for a Barbie doll with a vengeance.