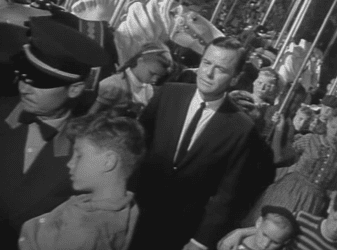 The funny thing about The Twilight Zone is that there are 156 episodes of this classic anthology series, but during the yearly marathons, the same thirty or so segments get rerun.
The one with "Talky Tina," or the woman (Agnes Moorehead) in the remote cabin with little spacemen chasing her ("The Invaders'), or the one about a very special alien cookbook ("To Serve Man.")
These episodes are all timeless and terrific and worthy of broadcast from here to eternity.

But there are other eminently worthy wonders in this land of imagination too; ones that don't quite bite with scalding irony, or sting with surprise and O'Henry twists. Instead, these installments tug at the heart strings and evidence a deep melancholy. Which brings us to my selection now: "Walking Distance," by Rod Serling. It originally aired in 1959...more than fifty years ago, during The Twilight Zone's first season on CBS. 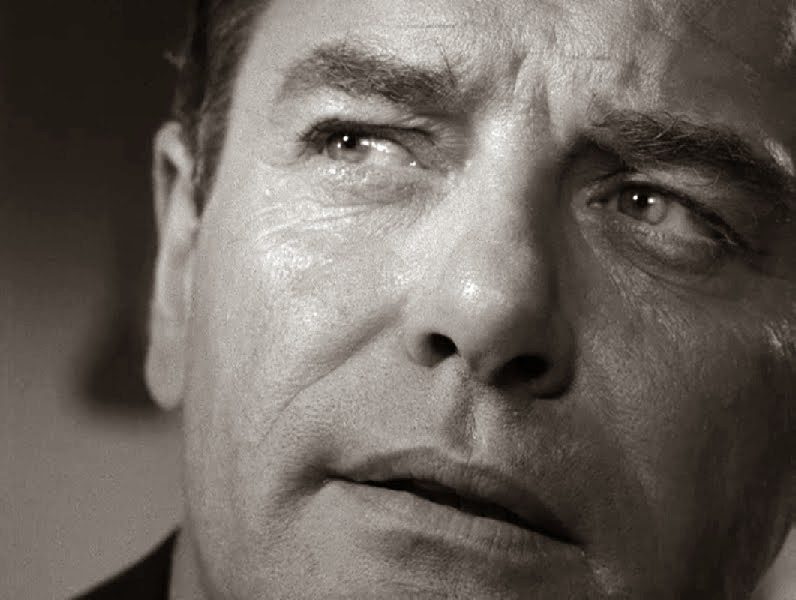 This is the story of 36 year old "vice president of media" Martin Sloan (Gig Young), a successful but overworked businessman. He feels like he's been at a "dead run" for a long time, and has grown tired.
Martin makes an unexpected stop at a rural gas station one day, only to realize that he's within walking distance of his hometown, "Homewood."
It's a place he hasn't visited in over twenty years.
While his car is serviced at the station, Martin walks down a dusty road (and we watch him go down that long path in a clever shot utilizing a mirror...), and straight into...the Twilight Zone.

For that old town -- a place of ice cream sodas, merry-go-rounds, games of marbles, Sundays in the parks and band concerts -- hasn't changed a whit in two decades. 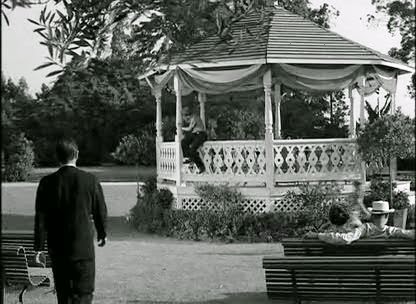 It still costs a dime for a chocolate ice cream soda with three scoops, for example.
Martin wanders the streets and begins to remember a time in his life when things were simpler; slower...happier. He remembers a time when he was eleven years old carving his initials onto a gazebo in the park.

Then, wonder of wonders, Martin spies himself as a teenager carving those very initials. He has returned home....to the past. He has traveled back 25 years.
Excited, Martin runs to his house and sees his Mom and Dad; both long dead in the present. He pleads with them, telling them that he's their son. However, they fear he's a crazed man, a lunatic escaped from an asylum.
Determined, the adult Martin chases down his young self on a merry-go-round, and tries to tell him a very important message. He succeeds only in scaring the teenage version of himself, and the boy falls and injures his knee. It's an injury that both Martins feel simultaneously since they are one in the same. 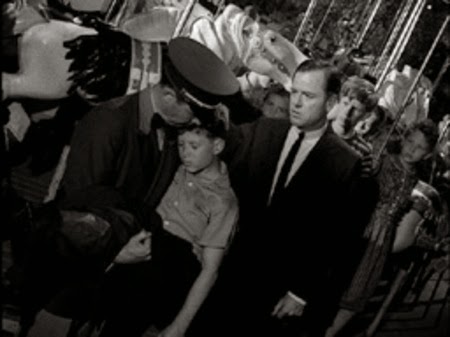 "I only wanted to tell you that this is a wonderful time of life for you," the elder Martin whispers sadly after the boy has been taken away. "Don't let any of it go by without enjoying it."

Finally, Martin meets his father again at the foot of the merry-go-round and his Dad knows who he really is now, because Martin dropped his wallet. His father is loving but stern, and tells the elder Martin he must return to the present.
"There's no room. There's no place," he tells him. "...maybe there's only one summer for every customer..."
Giving the kind of advice only a Daddy can give, Martin's father also suggests "You've been looking behind you, Martin. Try looking ahead."
As Serling's closing narration makes plain, "Walking Distance" is about the fact that no matter how hard we try, we can't go home again. The past is sometimes so close to us that we feel we can reach out and touch it, that it is merely "walking distance" from here.
A scent, a turn of a phrase, a photograph, a song, even an old TV episode (!) can spur images of a past that we have left behind...yet not forgotten. And many people, like Martin Sloan, experience that "errant wish" in terms of age.  They dream that a "man might not have to become older," that he might never have to outgrow the merry-go-rounds of his youth.

"Walking Distance" is a beautifully-shot episode of The Twilight Zone, as well as an emotional journey that speaks to hard human truths about mortality. At the center of the story is the merry-go-round as metaphor.
Life is indeed like a merry-go-round, we understand. We climb on, it starts to spin, and it feels like we can't easily get off....not without jumping. The episode plays with that notion artfully as the adult Martin chases down his younger self on the spinning amusement park ride.

The merry-go-round is depicted at a cockeyed angle, spinning ever faster. As the elder Martin nears his prey, the camera adopts a high-angle during the chase. Tellingly, Martin never quite reaches his younger self, just as a merry-go-round spins and spins but never actually goes anywhere or reaches any destination.
When Martin turns around and goes against the tide of the merry-go-round, time seems to slow down and this descent feels like a reckoning -- as past and future finally collide -- and Martin must make a choice about where he is going to live, and more importantly, how he is going to live.
His world needn't be one of "no more cotton candy," "no more band concerts" but to change it, he has to change how he sees life. 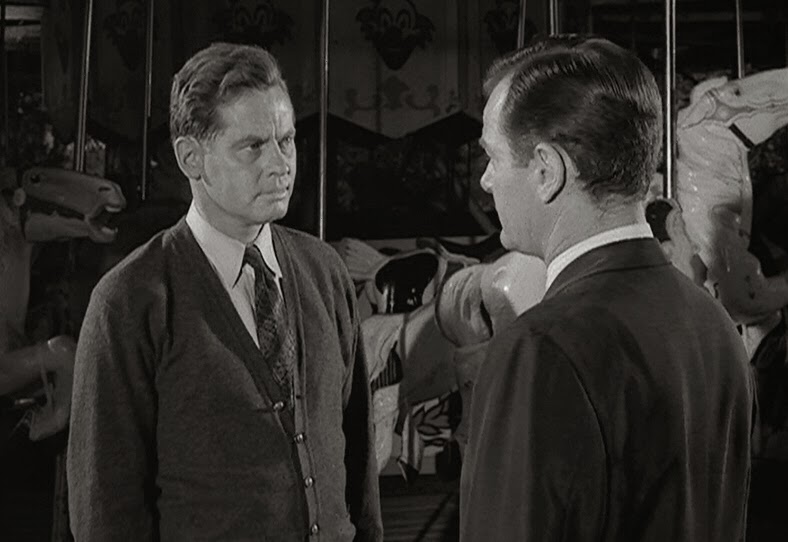 I love how the episode culminates around a tender conversation between father and grown son, a conversation that could not occur anywhere but the Twilight Zone, because in reality, the father is now long dead. Here, the "fifth dimension" makes room for a son -- no longer a kid -- to experience the wisdom of his father one last time; when he needs it the most.  I must confess, I find this conversation very emotional, very touching.
Martin's father is the age of the elder Martin, and one sense in both the performance and the dialogue that his Pop understands too well Martin's desire to return to the past; a past without responsibility or stress.

Rod Serling died young, and much of his work, including "They're Tearing Down Tim Riley's Bar" on Night Gallery expressed this wistful desire to return to a "simpler" time. "A Stop at Willoughby" on The Twilight Zone is a darker meditation on the same demons haunting "Walking Distance," but there the quest to stop running, to find peace, results only in death, not learning.
In some sense, I guess I prefer "Walking Distance" because Martin Sloan does get a second chance to get life right; to change who he is. As sad as it is that the past is gone, there's also an optimistic side to this tale: every new day is a chance to recapture what was lost; or find a different kind of happiness.
I sometimes wonder if Rod Serling -- who wrote a whopping 90 episodes of the Twilight Zone's 156 -- felt like life was a merry-go-round he couldn't escape from. Or if  -- with the help and catharsis of The Twilight Zone -- he managed to exorcise the same demons expressed by Martin Sloan in "Walking Distance."