The Twilight Zone Day: "One for the Angels" 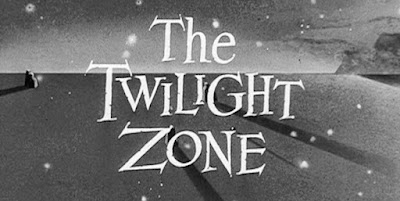 The second episode of The Twilight Zone (1959-1964) is a marked improvement over the first installment, "Where is Everybody?" and, more than that, a remarkably affecting and sweet tale. It's amazing to consider that this fledgling series manages to hit its stride just two weeks into its run, but that's pretty much exactly what happens with this tale by Rod Serling, the first to introduce the series' recurring character: Mr. Death.
"One for the Angels" opens with Rod Serling's staccato narration about "summer in the present." His words introduce us to Lou Bookman (Ed Wynn), a "pitch man whose life is a tread-mill," a character aged about 60. Today, Lou lives alone on a bustling city block, and is well-loved by the local children, who take an interest in the toys he sells on his stoop. 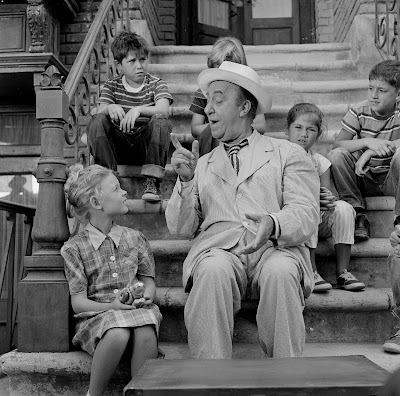 Then, one day, Mr. Death (Murray Hamilton) shows up in Lou's one-room apartment, and tells Mr. Bookman that the old man's departure from this mortal coil has been scheduled for midnight. The "pre-ordination is death in your sleep."
Lou tries to escape his death, and learns that there are only three valid reasons for appealing a death verdict: family hardship, priority for important individuals (a scientist working on a cure for a disease, for example) or unfinished business of a major nature.
Lou feels his appeal falls under the third category because he's never made a truly big pitch, "for the angels." Mr. Death reluctantly agrees to give him more time to achieve that dream, but quickly learns that Lou has exploited the loophole. Now Bookman plans never to do another pitch again...so he will never die.
Unwilling to be outmaneuvered by a mortal, Mr. Death selects an alternative soul to take with him that night. He decides to take a little girl from the street, a friend of Lou's. When Lou realizes she is to be taken at midnight, he tries to delay Mr. Death by launching into a pitch for the ages, and the angels... 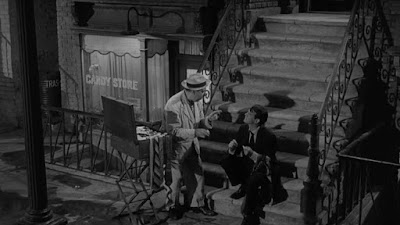 As the above-synopsis makes plain, this early Twilight Zone concerns both mortality and morality. In our effort to avoid one (mortality), we can, somehow, manage to ignore or circumvent the other (morality).
Lou Bookman is 69 years old, and yet he very much wants to continue to live. He believes that he can trick death, and manages to do just that.  But Death chooses to kill a little girl, and that is an immoral thing, a that, for Lou, he cannot abide. So Lou steps in and makes his pitch for the angels, knowing full well that it is he, not the girl, who will travel with Death that night. Bookman's understanding of right and wrong ultimately wins out over his desire to keep on living.
"One for the Angels" is both sweet and sad for its depiction of Lou, a kindly, unmarried senior citizen, scraping by, barely making a living, and having lived in a one-room apartment for 21 years. And yet Rod Serling sees a kind of dignity in this man, and his life. Lou leaves the mortal coil having saved a child's life, having made room for another soul. Lou's life is not one we might choose for ourselves, but it matters, both to him, the children whom he has befriended, and, in fact, the cosmos itself.
"One for the Angels" also remains memorable for its depiction of Mr. Death as a kind of mid-level bureaucrat. He is smartly-dressed, attractive (but not too attractive), and he uses the jargon of his job ("pre-ordination," etc.) He seems to rather dislike having to prove his identity, and he is obsessively concerned with administrative details. "When might we expect it?" He asks of Bookman's pitch "for the angels."  Like many bureaucrats, Mr. Death also seems to possess a limited imagination.
Or, that's one reading of his character, anyway. 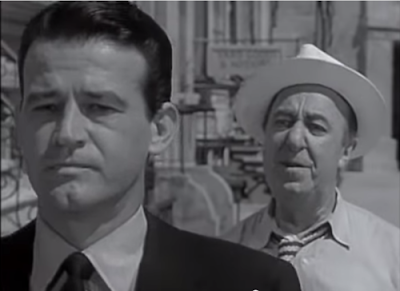 Perhaps, Mr. Death knew all along that Bookman was going to try to outsmart him, and his ploy with the little girl was all pre-meditated, part of the overall plan to make Bookman feel his death was more meaningful, more palatable. Again, this goes back to Serling's view of humanity, and the notion that all people are valuable, that all people matter.
The episode's only let-down, perhaps, is the underwhelming presentation of Bookman's big pitch. The episode cuts to shots of Mr. Death sweating, forking over cash, etc., but the audiences doesn't get to hear all of the sales pitch "for the angels." This is a bit disappointing since Lou's gift of gab is the thing, in a way, that saves a child's life. It feels like a failure of writing and presentation for the pitch not to come across with more stellar specificity than it ultimately does.
"One for the Angels" is sweet and humanistic. In this outing, Mr. Death is not someone to be feared or loathed, but  just a regular guy doing his job. In the end, this Not-So-Grim Reaper and Mr. Bookman walk off together, under the moonlight, and it's not hard to imagine that both men feel they have done a good night's work.
at May 11, 2022