Have a Monster-ous Holiday, 1970's Style 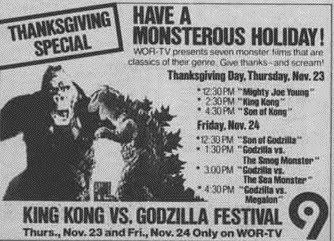 When I was growing up in the New Jersey burbs during the seventies and early eighties there was a great Thanksgiving Day tradition that I’d like to share on the eve of the holiday.
Every year, WOR Channel 9 would broadcast King Kong (1933), Son of Kong (1933) and Mighty Joe Young (1949) on Turkey Day.
Then, on Friday, the same station would host a Godzilla marathon consisting of such films as King Kong vs. Godzilla (1962), Godzilla vs. The Smog Monster (1971) and many others.  Some years, if memory serves, War of the Gargantuas (1968) also played.
I remember showering and dressing early on those Thanksgiving Days, so I could be lodged near the TV when the Kong movies started. Meanwhile, my Mom and Dad would be busy in the kitchen preparing a great meal of turkey, stuffing, baked carrots with cinnamon, and home-made biscuits.  The house would fill with the delectable aromas of the feast, and even downstairs -- while glued to WOR-TV -- I could feel my appetite for dinner building.
Our guests, usually my grandparents and aunts and uncles, would arrive sometime in the early afternoon, around 1:00 pm and I would socialize with them, and then sneak back to the family room for more King Kong.  Sometimes my uncle Larry, a horror fan after a fashion, would join me.
Then the meal and dessert -- a chocolate cream pie and a pumpkin pie -- would be served, and we’d all enjoy each other’s company over the delicious food.  After an appropriate interval of visiting and socializing, I’d high-tail it once more back down the stairs to watch more of the movies.
I’m certain my description of Thanksgiving makes it sound weird and anti-social, but you must remember that in the seventies, there were no VCRs (let alone DVRs or movie streaming), which meant that if you wanted to see a movie like King Kong, you had to seize your moment, or else wait for another year.
I believe it took me the better part of four Thanksgivings to see all of King Kong, and then not even in chronological order.  I actually saw the entirety of Son of Kong first, perhaps because it was often scheduled between our early afternoon dinner and dessert course.
This tradition of King Kong Thanksgiving and Godzilla Black Friday continued over a long period at my house -- the better part of a decade -- so much so that I still irrevocably associate the Holiday season with WOR Channel 9 and its monster movie broadcasts.
I still remember, a bit guiltily, forcing my parents to watch the 1970s Godzilla movies on Fridays, while we ate Thanksgiving leftovers in the family room.  My folks liked the King Kong movies, but when it came to Japanese monster movies, they weren’t exactly big fans.
Happy Turkey Day!
at November 22, 2021