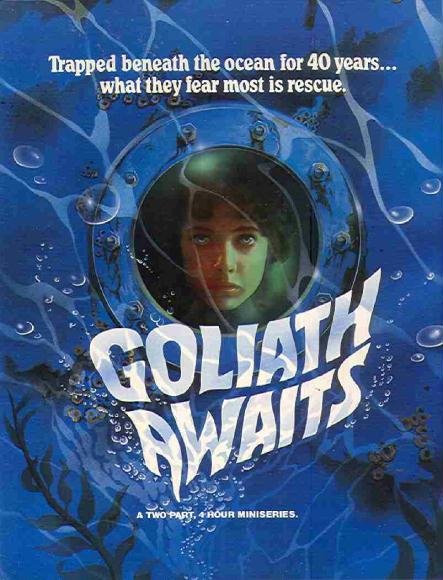 If you were around in the 1980s and paying attention to pop culture currents, you likely will recall this Kevin (Motel Hell) Connor-directed genre TV venture; one which was advertised with the haunting image of a winsome woman (Samms) gazing out of a porthole on a ruined old ship; staring out at the murky depths beyond. 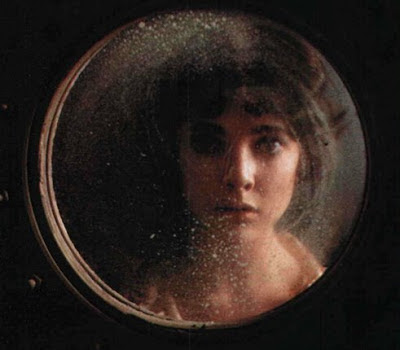 That evocative, Gothic image alone probably generated some great ratings for this impressive four hour mini-series (shown over two nights, November 16 and 17, 1981, as I recall.)

Goliath Awaits opens in 1939 as Edward R. Murrow reports that England has just declared war on Hitler and Nazi Germany. Unfortunately, the British sea liner Goliath is already at sea and imperiled by a pack of German U-Boats.

Soon, the magnificent vessel is sunk with all 1800 hands aboard, and lost to the tides of time. Her exact fate (and location) becomes a nautical mystery.

In 1981, however, an exploratory ship captained by Peter Cabot (Harmon) discovers that Goliath is -- miraculously -- intact (and positioned upright) some 1000 feet beneath the surface of the sea. As a deadly hurricane approaches, Cabot dives to investigate. He hears an S.O.S. emanating from the rusting hull of the "most famous ship of all time" and more incredibly, peers into a porthole and sees that beautiful porcelain face staring back at him.

Cabot quickly goes to the U.S. Navy for help solving this mystery. Admiral Sloane (Eddie Albert) is intrigued by the discovery and orders Commander Jeff Selkirk (Forster) to lead a rescue team to Goliath. 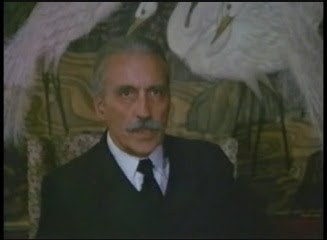 Sloan boasts a secret too. Aboard Goliath (and in the care of a U.S. Senator named Bartholomew...) is a diplomatic pouch with an eyes-only message for President Roosevelt. The contents of that communique could conceivably tear down the NATO alliance. Now there are two jobs for Selkirk: rescue Goliath's survivors and also acquire (and destroy) the communique, which is believed to be a Nazi forgery.

The British vessel Enterprise 4, from British Oceanics leads the rescue attempt. After receiving a message from Goliath in Morse Code (which warns the air is "toxic" and to "beware of McKenzie"), Enterprise's submarine docks with Goliath far below the surface, and a Navy team enters the ship through a torpedo breach. There, Peter, Jeff and Dr. Sam Marlowe (Alex Cord) learn that 337 souls now live aboard Goliath thanks to an air-bubble that has existed aboard the sunken ship once "equalization" occurred with the sea outside the hull.
In charge of this isolated society on Goliath is Mr. McKenzie (Lee), a former third-engineer and a man of extraordinary resources and intelligence. When the ship was struck by the torpedo all those years ago, McKenzie thought fast and managed to convert the ship's engines into air processors. Even more than that "miracle," he created an entire Utopian society, one featuring hydroponic gardens, fish hatcheries, and other wonders. Accordingly, the people of Goliath virtually worship the man.

Alas, there are also rebels aboard Goliath, deformed "Bow People" (suffering from the bends) who -- according to McKenzie -- just don't "fit in." They are lead by a man named Ryker (Duncan Regeher), a man who rejects McKenzie's brand of authoritarian leadership. 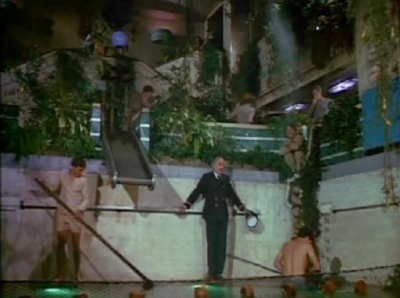 McKenzie's major domo is a petty Irish criminal, Wesker (Gorshin), who performs the difficult (and morally questionable...) tasks required to make a society like Goliath's thrive. This means that Wesker commands a virtual gestapo security force, and administers lethal injections to the physically or mentally infirm...those who can't work, but would use up precious resources.
Even as Peter finds himself growing attracted to McKenzie's fetching daughter, Lea (Samms), he starts to see the downside of Goliath's society and a the world where an "old man made himself king."

Soon, he becomes convinced (thanks to Ryker) that McKenzie and Wesker will never permit the rescue, because they will  lose their hold on power. Commendably, McKenzie puts the decision up to a democratic vote, but lies to his people about the feasibility of continued survival aboard ship. In truth, the vessel is running out of fuel, and the environment will soon turn bitter cold and inhospitable.

What you get, then, in Goliath Awaits is a thoughtful meditation on the idea you find in some Space:1999 episodes of the 1970s: that (to quote the episode "Dorzak"), it is the battle for survival that makes monsters of us all.

McKenzie is a fascinating character: a man who achieved technological miracles to save his people. He created a workable society from the ground up, one that -- amazingly -- flourished for forty years. Yet, at some point, he got used to the power, to "playing God," and his miraculous victory on Goliath became an oppressive terror to those whom he ruled.

You may recognize some elements of Goliath Awaits' plot from the fourth season Twilight Zone episode "On Thursday We Leave For Home," a story in which another charismatic, brilliant leader (James Whitmore) of an isolated community (on an inhospitable planet) came to resist a rescue mission because he simply couldn't give up his authority; can't give up the idea that he is "needed."

Goliath Awaits is sort of "On Thursday We Leave For Home" meets The Poseidon Adventure.

Despite the fantastic nature of the scenario (300 people survive in an air bubble over the generations...), Goliath Awaits is contemplative, deliberate and smart. It doesn't skimp over the difficult aspects of a rescue mission at the bottom of the sea.

In fact, it even paints a relatively full (and realistic) presentation of the world's reaction to the rescue, from White House Press conferences to TV news bulletins, to the diverse reaction of Goliath's citizenry. Since I've always been fascinated by stories about strange disappearances and mysteries at sea, I very much enjoyed the film and the fictional world it created.  Imagine if James Cameron took his submersible to the sunken Titanic and found three hundred people aboard, still alive.  That's Goliath Awaits in a nut-shell.

Kevin Connor (who also directed Land that Time Forgot and some episodes of Space:1999), executes several brilliant compositions on what was obviously a relatively limited budget too. For instance, there's a P.O.V. shot wherein the camera adopts the position of a speeding torpedo, and we essentially "ride" it (underwater) as it strikes the Goliath's hull.

Amazingly, the already-impressive shot doesn't end with the expected collision. Instead, there's a sort of optical cut and we actually enter the ship's interior with the torpedo, and see crew standing by unwittingly as it explodes. It's a fancy shot for the pre-CGI age, delightfully conceived and executed.

Another good composition also involves subjective P.O.V. A Navy rescue diver enters the Goliath, and emerges from the water, only to see Wesker standing before him, aiming a pistol at him. Before we can entirely register what's happening, the gun is fired, and we see the diving helmet's glass visor (over our eyes, essentially) shattered. Then blood hits it the visor in a spray.

Goliath Awaits also reminds me of Space:1999's "Mission of the Darians" or even The Starlost, genre entertainments in which a giant vessel is compromised, and mankind is forced to "evolve" or "adapt" based on limited resources.

Here, the people of Goliath dwell not merely in an air bubble, but in the equivalent of a time bubble. They exist in a world where Hitler was not defeated, and where the ship's band is always playing "Happy Days are Here Again." John Carradine plays a movie star of the silent age, the only celebrity in residence on the ship, and another beacon of a long-gone age.
at November 16, 2021