In “Valley of the Man-Apes,” Thundarr, Ariel and Ookla ride through Death Canyon when they spy intelligent ape creatures digging in the desert there.
Led by the malevolent, human-hating ape creature called Simius, the apes unearth a giant robotic ape paw.  It is the hand of a mythological figure called “The Mighty One.”
Worse, Simius and his minions are hell-bent on re-assembling the giant ape, and seek out the robot’s missing animatronic limbs.
Thundarr and his friends clash with Simius at an abandoned movie studio, but it is too late to stop him from completing his task. Simius puts together the Mighty One, a giant ape and movie prop from before the holocaust.  Worse, he still functions, and becomes a terrifying weapon.
Now Thundarr and his friends must defeat the giant mecha-ape using an abandoned World War II airplane, one flown (by Ariel) with magic. 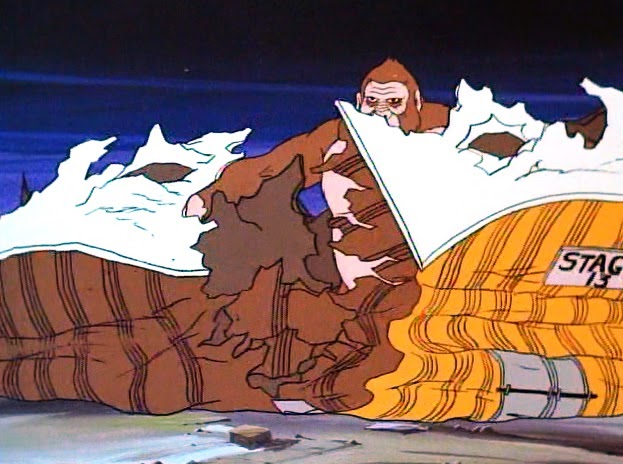 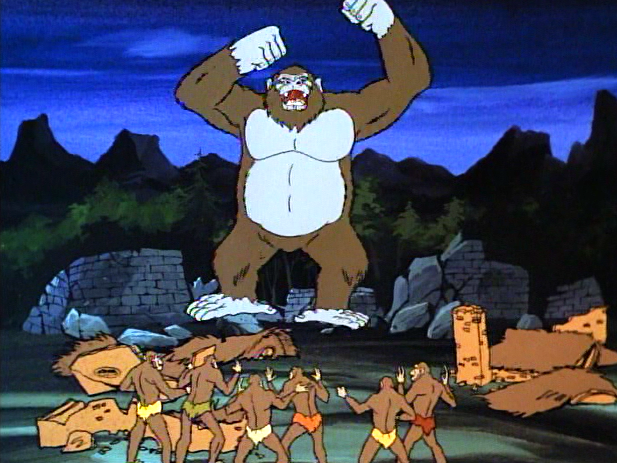 “Valley of the Man-Apes” is another really entertaining winner for Thundarr the Barbarian  (1980 – 1982).
The episode qualifies essentially, as a pastiche of Planet of the Apes (1968) and King Kong (1977).  To wit: intelligent apes attempt to make war against humanoid (or elf-in) villagers using a giant robotic ape.
But the ape is defeated in a battle with a pre-holocaust plane, and that fate is reminiscent of King Kong’s death in his famous cinematic outings. Even more delightfully, “Valley of the Man-Apes” stages much of is action at an ancient movie studio, and specifically a western ghost town there.  One battle sequence hauls out -- purposefully – every Western movie “saloon” cliché imaginable in about a minute long span.  Thundarr swings from a chandelier, there is fight over and across the central saloon bar, and even a piano in the corner comes into play..
There’s also some wicked, under-the-surface humor here.  Simius and his monkey friends are attempting to re-assemble, essentially, a giant prop of King Kong, one operated by robotics.
In real life, Dino De Laurentiis never quite got his Kong robot to work on the set of the 1976 King Kong, but that robot (and his behind-the-scenes story…) is nonetheless the clear inspiration for this narrative.  “Valley of the Man Apes” thus functions both as action-packed adventure, and subtle satire of Hollywood, from its depiction of the cowboy milieu to Tinsel Town’s over-spending on special effects gimmicks that have no chance of working as intended.
Filled with clever allusions to Planet of the Apes, King Kong and Hollywood history in general, “Valley of the Man-Apes” is one of the best and smartest Thundarr episodes, one that stands alongside such efforts as “Stalker from the Stars” and “Island of the Body Snatchers.”
at July 24, 2021