In “All that Glitters” the men of the Robinson party, save for Dr. Smith (Jonathan Harris), have left the encampment in the chariot in search of drinking water for the settlement.

Back at the base, Smith and Penny (Angela Cartwright) encounter a fugitive from the law, Ohan (Larry Ward), who is being chased by a galactic law enforcement officer, Bolix (Werner Klemperer).
Bolix reports that Ohan has stolen the universe’s greatest treasure, and that he has been sent to retrieve it.

Smith finds the treasure and quickly uses it.  It is a ring he wears around his neck that can turn any object he touches into platinum… 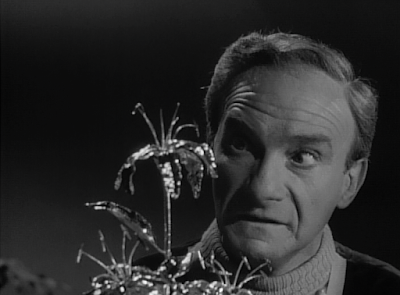 Well, I believe the writers of Lost in Space knew, without a doubt, that they had descended into the trash heap with this episode: “All that Glitters.”

Why?  One of the guest characters is named Bolix (pronounced “bollocks”).  And this episode -- the fourth in a row to highlight a blundering Dr. Smith in a central role -- is absolute bollocks indeed. 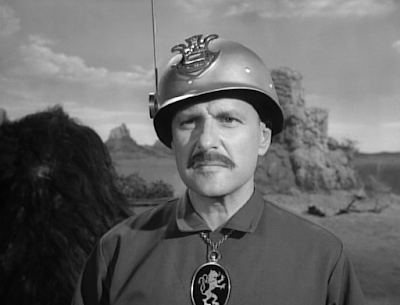 Let’s just take the episode apart a piece at a time.

First, we learn that Officer Bolix is a representative of a galactic law enforcement agency.  He shows a badge, and has two guard-dog wookie creatures as companions. He reports that he has been watching the Robinsons for some time, and is familiar with all of them, including Smith. He has files on them all, apparently.

Okay, then why doesn’t he offer to transport them to safety, to another world that is part of his civilization?

Even more importantly, why don’t the Robinsons -- when confronted with a police officer -- ask to be taken to his home world, so they can either return to Earth or continue on their original journey?

In short, how come they don’t ask for any help at all, when they so clearly need help?

Here’s an officer sworn to protect and serve the community…and that includes them! He's a representative of a highly-advanced, galactic civilization!

At the very least, the Robinsons might ask the police officer to send another ship for them, or a supply ship to bring them water, or to know their actual "address" (local star-group, etc.) so they can become a part of the galactic civilization.

But no, “All that Glitters” sees the Robinsons ask no such thing, for no such help. 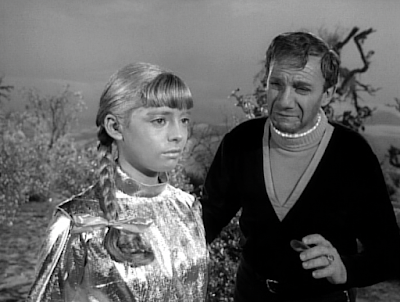 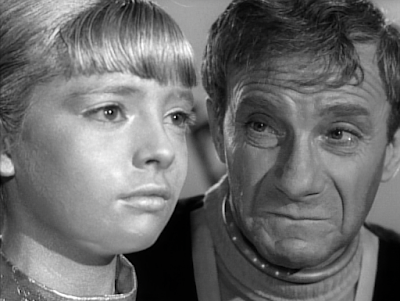 Secondly, the greatest treasure in the universe is…platinum?

Once more, “All that Glitters” reveals the series' pervasive unimaginative thinking.  Yes, platinum is valuable here on Earth, but why it would be so valuable out in the galactic culture?  What about star-stuff, for instance?  What about anti-matter?

There are so many “sci-fi” ideas that could have been used here instead of platinum, but Lost in Space is unnecessarily Earth-centric in its thinking. All aliens we encounter are mere variations of people we know on Earth (pirates, hillbillies, cops and robbers, traders, etc.), and anything of value is something we already know about on Earth. It’s disappointing to say the least.

Still, there are aspects of “All that Glitters” that are worth lauding.

A certain percentage of Lost in Space episodes play not as science fiction, but as fairy-tale based/fantasy morality plays.  Certainly -- at least in its use of the legend of King Midas -- “All that Glitters” falls into that category. It substitutes Smith for Midas, and platinum for gold, but we absolutely get the idea.  Be careful what you wish for.  Wealth isn't all it is cracked up to be. You can't eat platinum. 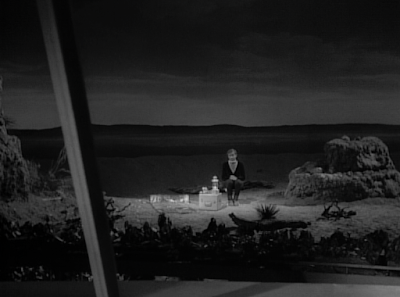 Smith promises to learn this lesson, and is as desperate here as we've ever seen him in "All that Glitters."  But by the very next episode, he is acting selfishly again.  There ("Lost Civilization") he steals the chariot's air conditioning unit so he can remain cool!

Other Lost in Space stories also feature elements of fairy tales and fantasy (consider the Sleeping Beauty angles of “Lost Civilization, for example), and are entertaining to a degree based on their re-use of fantasy or fairy tale tropes.  But the veneer of plausibility, especially in this story, is corrupted to the point that it's difficult to enjoy these creative elements.

Suffice it to say that after four episodes in a row of Smith getting into trouble with aliens and alien artifacts, the series is feeling very old.