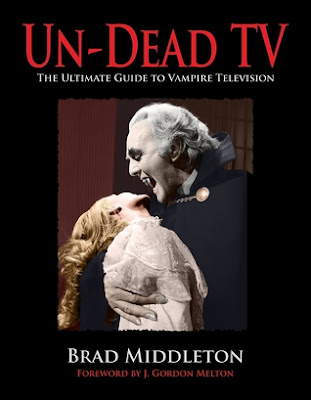 Un-Dead TV is a five-hundred page+ reference book by Brad Middleton that focuses on the vampire's many appearances throughout television history.

The book's sub-title -- "The Ultimate Guide to Vampire Television" -- is actually, in this case, truth in advertising. Un-Dead TV is a treasure-trove of useful information on its subject matter, and author Middleton has gone the extra mile (or fifty extra miles...) in terms of tracking down obscure TV series and providing relevant and important data about specific episodes.

Un-Dead TV consists of eleven chapters plus a whopping seven appendices, and each chapter includes a self-contained, vampire-oriented topic.

For instance, the first chapter is dedicated to the vampire as the "monsters of the week," while the second chapter deals exclusively with entire series devoted to vampires (like say, Forever Knight, The Vampire Diaries or True Blood).

Other chapters include information on TV movies-of-the-week, animated productions, documentaries (and reality-TV), and even programs currently in development.  One appendix even deals with vampire appearance on web programming!

But the book's glory -- as is often the case in terms of reference books -- is not merely the impressive breadth of coverage, but rather the well-considered organizational structure of the material.  Every section of the book features series titles listed alphabetically.  Then within each title entry, the author awards "bats" (instead of stars) on a 1 to 4 scale, and features credits, synopses, and commentaries on each production.

But this means that if you remember an episode of Alfred Hitchcock Presents featuring a vampire you just go to the "monster of the week" chapter, scan for the title alphabetically, and find your title lickety-split.  And again, Middleton is an authentic completist here.  It's easy to remember a vampire episode on a horror-themed program like The X-Files or Rod Serling's Night Gallery, for instance, but how about remembering a vampire-centric episode of Bigfoot and Wildboy (1979)?

Also, Middleton leaves no stone un-turned, and has tagged vampire programming on non-genre shows such as Crossing Jordan and Diagnosis: Murder.  By doing so, he paints a broad picture of vampire television, and reveals the full breadth of the monster's influence on the format.

As a writer of reference books myself, I appreciate Middleton's obsessive attention-to-detail, and his willingness to track down the hard-to-find stuff: the programming that's well off the more-commonly traveled paths. I mean, who remembers that Little Gruesome -- a character in  Hanna-Barbera's Wacky Races -- was a vampire?  Part of being a good reference book author (and I'm still learning this facet of the job...) is being an intuitive detective, and guessing "where to look" for your subject matter.

Accordingly, I wholeheartedly recommend this book if you enjoy reading about vampires on television, or if you are an author writing about those subjects.  Un-Dead TV is an invaluable resource, and one that will find prized real estate on my office shelf.
at August 30, 2013