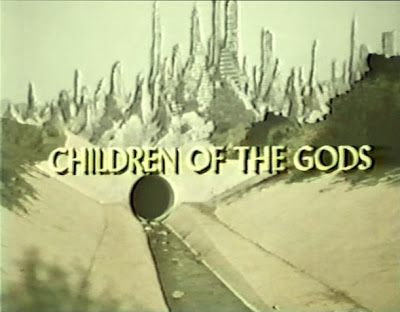 In The Fantastic Journey's fourth episode, "Children of the Gods," our wayward travelers in the Bermuda Triangle -- Varian, Scott, Lianna, Fred, Willaway and Sil-El --  happen into a strange province that reveals signs of both the ancient past, namely Greek ruins from 500 BC, and the distant future, particularly a bombed-out, ruined metropolis on the horizon.
Very soon, the travelers learn that the city remains inhabited, but only by a tribe of uniformed, militant teenagers and children.  All the grown-ups -- "The Elders"-- have been driven off by "the Power," a particle beam weapon,  after making some children their slaves.  Entrenched in the society then, is a deep-seated mistrust of adults of all stripes. 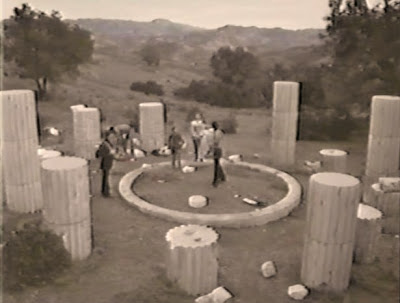 When Willaway enters the sacred Greek temple and finds a cache of high-tech laser weapons, he is promptly sentenced to death by Alpha, leader of the children, for his trespass.

Realizing only he can save Willaway from impending execution, Scott prepares for  ceremonial combat with Alpha.  If he wins,  he can take the leadership role in the society and save his friend's life...
In reading the synopsis of "Children of the Gods," you'll probably recognize several literary and TV influences.  In terms of literature, the episode harks back to William Golding's 1954 novel, Lord of the Flies, which involved a society crafted solely by children.  In the novel, that society was designed to serve as a microcosm for all of human society, and the author debated human nature.  In "Children of the Gods," the same issue is broached.
Specifically, The Fantastic Journey appears to subscribe to the idea that power corrupts.  Here, Alpha is just as much a tyrant as any adult who ruled before him.  "You've become the very thing you say you hate," Varian informs Alpha, near episode's conclusion, sounding very Captain Kirk-like. 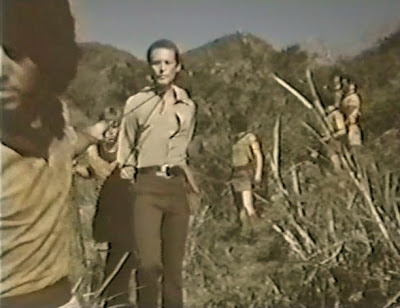 Another issue roiling in "Children of the Gods" is clearly the Generation Gap, the notion that adults and teens are literally enemies, locked in a war for all time.  There can be no peace between them, apparently.
If you're a fan of Star Trek and other televised science fiction, "Children of the Gods" may strongly remind you of the first season Trek episode, "Miri," which also concerned a society where children had graduated to positions of power and authority, and deeply disliked adults, or "Grups."

In both stories, the children are finally reminded of their common humanity, and of the fact that the "leader" will soon be an adult, himself.

The Lord of the Flies premise also  appeared throughout science fiction film and television in the 1970s quite a bit, from the "cubs" in Logan's Run (1976), to the "Children of Methuselah" episode of The Starlost in 1973.
In terms of The Fantastic Journey's continuity and development, "Children of the Gods" accents a number of elements that would appear again and again in the series.  Here, Willaway's curiosity gets the better of him, and he inserts himself into the middle of a crisis.   We'll see that again. Perhaps more importantly, Willaway is often utilized by writers as the informal historian of the group.  In "Children of the Gods," he recognizes the Greek ruins, and quotes Pindar (522 - 443 BC), a lyric poet and author of choral songs.  Uniquely, Pindar often wrote of athletic victories and championships in Greece, and his "temple" here is the site of the society's combat rituals.

Willaway also gets to demonstrate again his characteristic world-weariness when he wonders: "Are people ever going to stop killing each other?" 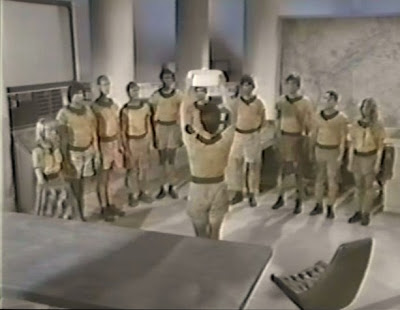 In terms of other character touches in "Children of the Gods," Varian again uses his handy sonic energizer, which is able to "manipulate matter" this week, and Lianna demonstrates the ability to render enemies  unconcious by placing her hands on their temples.  It's sort of a Vulcan nerve pinch variation, I guess you'd say.

In both instances, these "tools" feel a little bit like crutches.  They are easy outs for the characters (and for writers...) when confrontations occur.

Other than Willaway -- who is featured in a great visual composition as he appears from behind a Greek bust -- Ike Eisenmann's Scott probably comes off the best in "Children of the Gods."  His character boasts a strong sense of morality, and a sympathetic heart.  Here, Scott volunteers for ritual combat with Alpha -- a much taller, stronger teenager -- knowing he will lose, but that he has no choice but to make the attempt.  He's a brave and likeable kid.  This is not a small accomplishment in terms of performance and character development since a lot of "sci fi kids" like Wesley Crusher or Adric end up somehow angering sci-fi fans, and, I think, unconsciously activating a sense of fandom's own deep-seated self-loathing.
Meanwhile, our young doctor Fred (Carl Franklin) is as under-utilized as ever in "Children of the Gods," though the beginning of a Spock-McCoy bickering relationship between Fred and Willaway has now begun in earnest.  At least that gives him something to do, other thanmerely recite hip 1970s slang.
Taken in toto, "Children of the Gods" is a solid if somewhat uninspiring episode of The Fantastic Journey.  The theme about endless war -- and children repeating the mistakes of their fathers -- is a good, if familiar one.  There's not a lot new to see here, and so the episode plays as a little flat.  Some of the same issues of war and peace would be better handled in the next installment, "A Dream of Conquest," with guest star John Saxon.
Next week on cult-tv blogging: "A Dream of Conquest."
at January 29, 2012