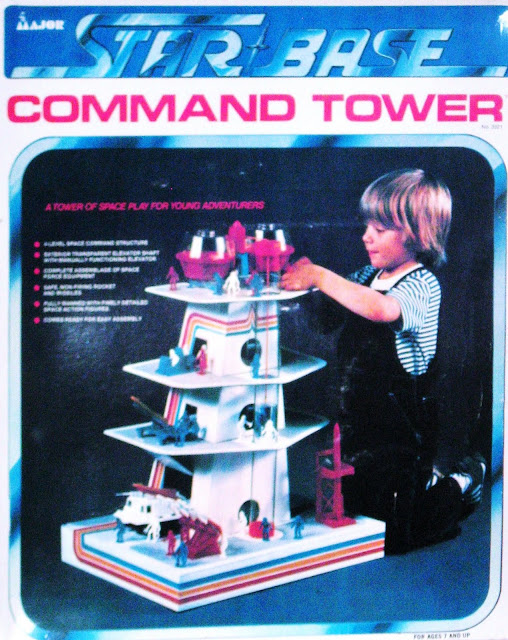 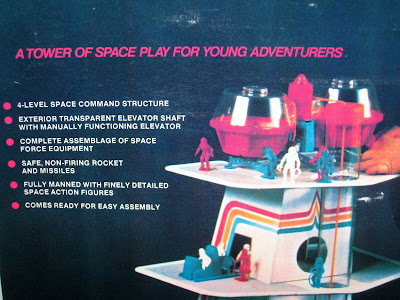 The year 1979 was a pretty great one for kids who were interested in space adventuring.
On the big screen: Star Trek: The Motion Picture, The Black Hole, Buck Rogers in the 25th Century, Moonraker and Alien.
And at home on ABC TV every Sunday night: Battlestar Galactica.
Toy stores were terrific places for the final-frontier-minded tykes as well.  Their shelves were packed with Kenner Star Wars figures, and, last but never least, The Micronauts.
A cool thing about this era was that many toy companies without licenses to popular movie or TV franchises also jumped on the outer space bandwagon/craze and created some generic but wildly fun space adventure play sets and action figures.
These sorts of figures and sets have become a kind of weird passion for me over the years (and you can check out my home office collection these days, here.)
I remember playing with a lot of these generic "space" toys as a child and wondering what series or film they were from.
But the fact that they were from no such franchise at all made them perfect (and inspirational) sources for creative and ingenious play.  They became more interesting to me, actually, because I could, as a 9 year old kid, create my own universe.  I don't doubt that just such play actually developed my desire to be a writer.
Ideal's S*T*A*R* Team (1977) leaps to mind, a neat Star Wars rip-off toy line, with a menacing Darth Vader-ish villain called "Knight of Darkness." 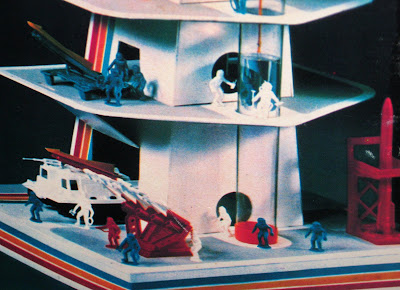 And right around 1980, Sears had a fold-out Star Fortress play set that was a heck of a lot of fun (and again, sized just right for your Star Wars figure collection).
In 1979, Minor Industries released a "space play set" as well, the over-sized "Star Base Command Tower" (No. 3321) that is the subject of this flashback.
"A tower of space play for adventurers" (ages 7 and up...), The Star Base Command Tower is a heavy cardboard, easy-to-assemble edifice.
It consists of a "four level space command structure," and an "Exterior Transparent Elevator Shaft with manually functioning elevator."
It also came with a complete "assemblage of space force equipment."
On this last front, the set included a white tank-like vehicle, a rocket launcher, a space sled of sorts and two red headquarter "domes" with transparent tops.
Better yet, the Star Base Command Tower also came "fully manned with finely detailed space action figures."   These astronauts are molded in various action poses, carrying walkie-talkies, tools and the like. 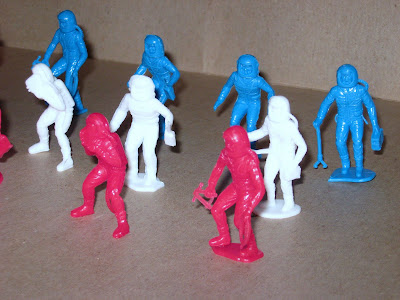 Truth be told, they look more like a throwback to the late 1960s, 2001: A Space Odyssey/Major Matt Mason era than Star Wars-like characters, but that's fine with me since I grew up on a steady diet of Planet of the Apes and The Green Slime.
Still, the design of the figures makes me wonder if this play set was a re-issue of a much older one.
Anyway, I always have my eyes out for these generic star bases, command towers, command bases, and galactic fortresses.  I came upon this one recently -- in outstanding condition -- and plan on sharing it with my son Joel, this summer.
"Sharing" means I'll put the base together and then have a blast watching him play with it.    After he goes to bed though, I'm definitely going to test out that transparent, manually operated elevator...
at April 27, 2011