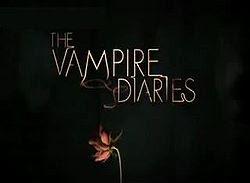 "It's important to stay away from fads," one smoldering vampire brother, Damon (Ian Somerholder) warns his equally-smoldering, vampire sibling, Stefan (Paul Wesley), in the top-rated premiere of the CW's The Vampire Diaries.

That also happens to be good advice for the writers behind this fledgling series...

While allegedly based on several young adult novels by L.J. Smith (originally published in 1991 and 1992), this new TV initiative brazenly attempts to suck the teeny-bopper life-force right out of Twilight's beating, undead heart.

Painfully earnest, agonizingly derivative, tortuously superficial, The Vampire Diaries, at least in the pilot episode, is literally Twi-Lite. It exists not because of some grassroots, urgent fan desire to see the nineties novels adapted for the small screen, but because romantic vampires are in vogue right now. Because, as Damon would say, there's a "fad." But let's take his advice and beware of that fad, okay?

Not to go off on a tangent here, but I should probably state for the record that I don't hate Twilight.

Yet -- I should also explain -- I don't hate Twilight in the same way that Robert De Niro didn't hate Juliette Lewis's character in Cape Fear (1991), if you catch my drift. That lack of animosity doesn't mean Twilight shouldn't be taught a few hard lessons (mainly in genre history...), you know?

I didn't judge the first Twilight movie to be particularly good, let alone original. Overall, I would generously rate it about a "C." I've seen worse, and I've seen better. Transformers was worse, by comparison. The Spirit was worse. Hell, the remake of Friday the 13th was worse. I am not at all despondent about a sequel to Twilight because I do believe the cast was promising; and that there was, undeniably, room for improvement. A good Twilight movie could still be made, theoretically.

Furthermore, I am genuinely delighted that the Twilight books are so wildly successful, and that a younger generation is reading them with avarice and devotion. Exposure to popular fiction like Twilight will inevitably lead these same teens to other books; other literature. Just as -- for many in my generation -- Star Wars (which some older fans also criticized as painfully derivative and juvenile...) led us to an appreciation of Heinlein, Asimov, Clarke and other science-fiction authors. So if the Twilight franchise gets even one teenager hooked on the reading habit, I judge it a net positive. There's nothing wrong with appreciating romance novels for themselves, either, if that's your bag.

Frankly, I don't see a reason to look down my nose at Twilight fans any more than I would look down my nose at fans of Dark Shadows. Twilight is merely the latest version of an oft-told tale: the vampire/human soap opera (also dramatized in 1996's Fox TV series, Kindred: The Embraced). And apparently this tale speaks powerfully to the up-and-coming generation. I could speculate why. Teens today have lived their lives in the shadow of 9/11; of violence and terror and death as constant backdrop. The literary/celluloid vampire, Edward Cullen, also exists in a world of perpetual violence...but manages to go on, to deny the violence that is part-and-parcel of his nature...and seek happiness. Our society is also rapidly accepting gay marriage, assimilating millions of new immigrants, and coming to a new social compact about the role of government in our daily lives, in our health, in our economy. A (reformed) vampire -- the outside "foreigner" -- represents that alternative life-style, the unknown, peaceably integrating into the traditional American way of life.

I suppose older horror fans are upset over Twilight because now a lot of studio money is going into knock-off Twilight productions like The Vampire Diaries instead of more original ventures. Of course, it's highly debatable whether crappy teenage vampire movies are any worse, in toto, than crappy remakes of American and Japanese horror films (or 3-D horror films...). To those negatively obsessed with Bella's story, I can offer only this comfort: Twilight too shall pass.

Why? Because for a film, book series or TV series to really earn the (relative) immortality of a James Bond, Star Wars or even Harry Potter, it must speak, at least a little, to more than one generation at a time. I mean, I can see executives scoffing and making excuses for this new CW series, pointing out that some almost-forty year old guy like me isn't exactly the intended audience for The Vampire Diaries.

Perhaps that's true, but nor was I the intended audience for "teen" dramas such as Buffy the Vampire Slayer (1997-2002), or Veronica Mars (2004-2007). Yet those programs were so continuously clever, so spectacularly well-written, so relentlessly intriguing...that I kept tuning in, week-after-week, year after year. It wasn't "what" Buffy or Veronica concerned so much as "how" the creators of those series approached their narratives. And, from my perspective that's what appears missing from Twilight and The Vampire Diaries. Some overarching perspective or world view that could take the interesting and resonant context behind these vampire productions and make them more meaningful, more powerful...more human.

It's hard (and no doubt, a little unfair....) to judge from just one episode, but The Vampire Diaries doesn't appear to be in the same class as either either of the aforementioned teen-oriented series from the WB/CW. This show is depressingly unoriginal in general, not just in the genre. We get Dawson's Creek-style soulful pop-music playing over angst-ridden voice-over entries in teenage journals (all the better to sell albums, my dear..). We get frankly explicit sex talk from cynical, too-grown-up teens...which is kind of unsavory. We also get genre cliches as old as Dracula himself. From the vampire who seeks a modern doppelganger of the woman he once loved and lost (see: Fright Night [1985]), to the mystical jewelry that prevents a vampire from burning up in sunlight (think Buffy's "Ring of Amara"), this material just seems depressingly familiar if you've been around the pop culture block more than once.

And, then, of course, we have the baffling fact that that hunky vampire, Stefan Salvatore, keeps returning to high school without explanation. Once around is enough for most folks, thank you very much. Does Stefan keep repeating just so he can show off his historical knowledge to arrogant school teachers? Why waste immortality on driver's-ed, sex-ed, algebra and final exams? I would hate to spend my eternal days trying to remember my locker combination, avoiding jocks, and making goo-goo eyes at stuck-up cheerleaders. The fact that Stefan chooses to repeat high school (rather than, say, college...) suggests to me that this vamp is developmentally arrested.

It isn't just what The Vampire Diaries inherits from other vampire dramas that makes it flat and lifeless. It's what it so clearly and blatantly lacks: a sense of humor and perspective about itself. Everything is played deadpan earnest here -- as though this is War and Peace dunked in the burning fires of puberty. A show that so greedily and parasitically feeds off the life-blood of older, superior productions (like Dark Shadows, Forever Knight, Kindred, Buffy, Twilight, etc.) should at least boast the decency to playfully acknowledge those genre roots. Something played in a lighter vein, if you'll excuse the pun.

In closing, I'll quote another axiom from The Vampire Diaries: "The bad things stay with you. They follow you."

Believe me, the one thing we don't need right now is a Twilight-Wannabe following us around.

November 2011 Update:  Well, I'm watching follow-up episodes of The Vampire Diaries' first season at this juncture, and I can say that -- starting at about episode five -- the show begins to improve notably. I'm still in the early days of the first year, but these follow-up episodes aren't nearly as dire as the pilot.  The show is showing a very humorous side (with Damon's reading of Twilight, for instance),  and I begin to understand why some people have become devotees of the program.  At some point, when I'm caught up with the first three seasons, I intend to write a new review, one that more accurately explores the strengths of the series, rather than the abundant weakness of the pilot.