In “The Robots of Pod, the third episode of Sid and Marty Krofft’s The Far Out Space Nuts (1975), Barney (Chuck McCann), Junior (Bob Denver) and Honk (Patty Mahoney) are ready to escape from the planet where they have been marooned. They take off, but the lunar lander cannot achieve escape velocity.

As it turns out, this is because Junior has brought his rock collection aboard. Barney throws the rock collection overboard, but also ends up tossing out all the ship’s spare fuel.

An alien woman, Princess Lantana (Eve Bruce) appears and suggests a trade. She will have her minions collect the lost fuel, if the Earthling and Honk retrieve her robot minion control belt.

That item has fallen into the hands of the evil Mercurial (Earle Doud), in the “forbidden territory of Pod.”

The space nuts agree to those terms and infiltrate a giant subterranean city to steal the control belt.  Doing so will depend on robot disguises…and magnetic boots. 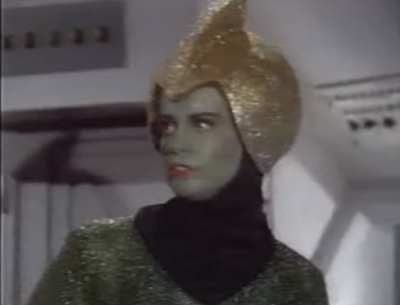 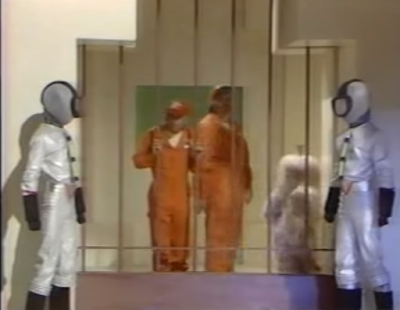 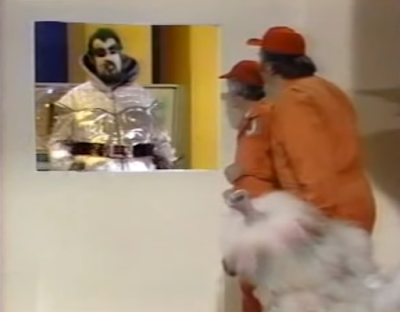 Audiences actually get a new plot this week on this Sid and Marty Krofft program from 1975. For once, an alien villain doesn’t want to take control of Junior. Instead, the Space Nuts team up with an ally to restore a rightful ruler, the princess, to her throne.

The episode also features some new gags, and an increased focus on slapstick humor. In a shocking turn of events, there are even more than the standard three robot minions on screen at a time, for one scene!

The silliest jokes this week arise, strangely, in a robot cafeteria in Mercurial’s underground city. Disguised as robots, Barney and Junior go through a lunch line, and are served a meal (a crankshaft, some springs, and some ball bearings.)  Naturally, Barney finds the meal unpalatable, but Junior likes the crankshaft (which sounds crunchy).

“The Robots of Pod” is also the first episode in which the interior of the lunar lander is featured, though it appears in the opening credits each week.  The set is good, if cramped, but as I noted last week, really doesn’t compare favorably to the primary set of its Sid and Krofft contemporary, The Lost Saucer (1975).