Saturday Morning Cult-TV Blogging: Far Out Space Nuts: "It's All in Your Mind" (September 6, 1975)

This week, our Saturday morning cult-TV blogging takes us back again to the Kroffts, and the year 1975. Although Land of the Lost (1974-1977) and The Lost Saucer (1975) were both airing on NBC at the time, another genre production from the duo found a berth on CBS: Far Out Space Nuts (1975).

This live-action series ran for 15 episodes in 1975, and starred Bob Denver of Gilligan’s Island as Junior, a hapless maintenance man thrust into space on a U.S. rocket alongside his equally hapless buddy, Barney (Chuck McCann).

After their unfortunate take-off, the duo tries to return home to Earth in their lunar lander, meeting up with a cute, if diminutive alien, Honk (Patty Mahoney), on the journey.

The whole show is basically an even more slapstick version of The Lost Saucer, though without androids and the time travel angle. 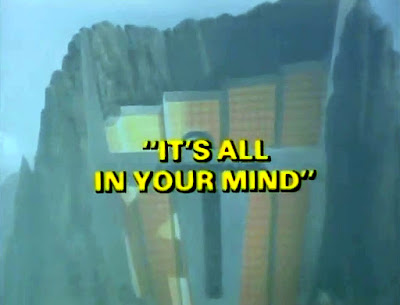 The first episode of Far Out Space Nuts is “It’s All In Your Mind.” On a distant planet, Barney and Junior attempt to repair their ship’s engine, a “space combustion system.” Barney tries to teach Junior how to complete the repairs, and he shows a bizarre knack for it.

Meanwhile, the denizens of the planet -- minions of an intelligent computer called G.A.L. 36-24-36 -- seek to capture Junior. These mindless drones serve the machine, which in turn demands complete control over the will of everyone on the planet. “All thoughts on this planet must be mine,” G.A.L. reports, showing an obsessive interest in Junior. 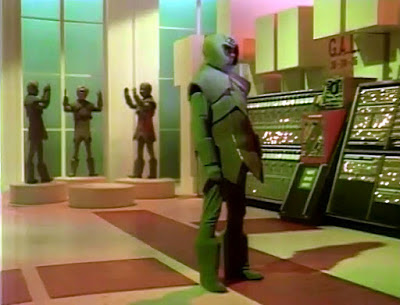 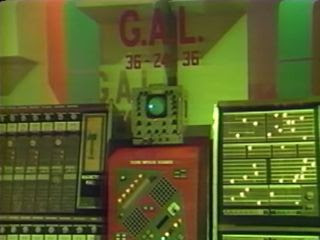 The Drones captures Junior, and attempt to transfer his mind into the machine’s storage banks. Meanwhile, Barney and Honk are held captive behind a magnetic wall. Fortunately, Junior’s extreme illogic causes G.A.L. to malfunction, and the drones are freed after an imprisonment of 132 eons.

As you can tell from the preceding synopsis, “It’s All in Your Mind” sounds very much in keeping with the other Saturday morning programs I’ve covered here on the blog over the years. We have our hapless heroes (acting firmly in the tradition of Abbott and Costello), the cute costumed side-kicked, and a moral or didactic lesson about the importance of thinking for yourself. 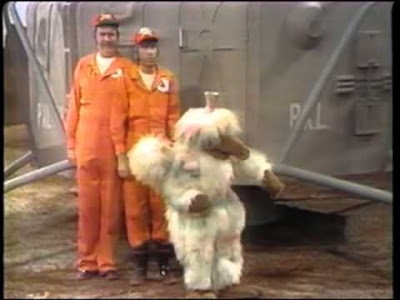 What the synopsis does not capture, however, is the truly creepy nature of this episode. The drones march, Cyberman-style, in lock-stop, after their prey, throughout the tale. And their attacks are accompanied by unsettling sound effects and music. 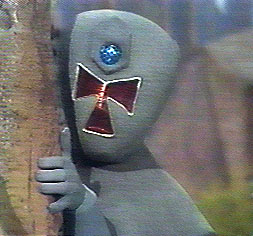 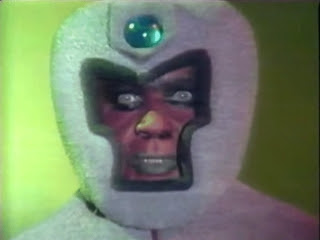 Sure, the story isn’t scary in a conventional sense, but the elements add up to a presentation that actually feels a bit less kiddie-friendly than one might expect. The Kroffts, to their everlasting credit, went this way occasionally in their entertainment, with the Sleestak on Land of the Lost, for example.

The result is that for all its budgetary restraint and dopey comedy, “It’s All in Your Mind” is actually a pretty compelling little tale, which is a claim I can’t necessarily make for many episodes of either Lidsville (1971) or The Bugaloos (1970), which I’ve covered here recently.

Far Out Space Nuts also seems lower-budgeted than even The Lost Saucer. That series had a great standing set (the saucer interior) and elaborate costumes for its stars, Ruth Buzzi and Jim Nabors.

Here, we never see the inside of the lunar lander craft, only its landing site, for example. And the enemy minions, though fearsome, number under half-a-dozen.