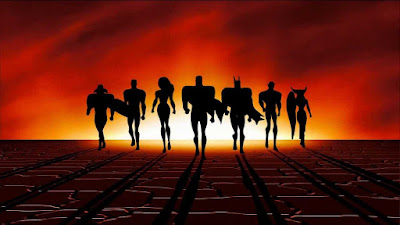 “The Enemy Below” is a first season episode of Justice League (2001 - ) that has the distinction of introducing Aquaman to the prime-time TV series (if not the titular organization).

In “The Enemy Below,” a U.S. nuclear submarine, the Defiant, comes under attack by an advanced vessel. This underwater vehicle belongs to Aquaman, King of Atlantis, who is protecting his borders from invasion. He has no use for “surface dwellers.”

But Aquaman soon has greater problems to contend with: treason. His own brother, Orm, attempts to murder him, and kill his son, the rightful heir to the Kingdom of Atlantis.

The Justice League intervenes to help Aquaman, who must now stop a “doomsday” device from destroying the surface world. 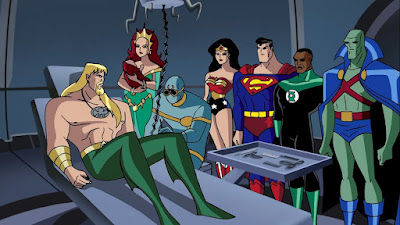 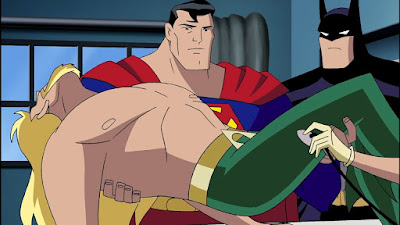 Look at what they’ve done to Aqauman! In the 1960’s and 1970’s Aquaman was a blond haired, friendly superhero who could communicate with the animals of the sea. He was wholesome and kind, and basically -- down to the curl in his golden hair -- an underwater, blond version of Superman.

But the upshot was that some people made fun of the character, and felt he wasn't edgy, or angsty enough.  He was the butt of many jokes.

So the original portrayal changed in the 1990’s. Aquaman developed an attitude, grew long hair, and acquired a hook for one hand.

This episode of Justice League follows on with that modern portrayal.  It depicts a Namor-like, arrogant individual who wears the heavy weight of ruling Atlantis on his shoulders, and clearly lacks for the social niceties. And, in the course of the two part “The Enemy Below,” we see the incident that costs him a hand.  Here, in the act of saving his son, he must cut it off.  He later acquires the hook. 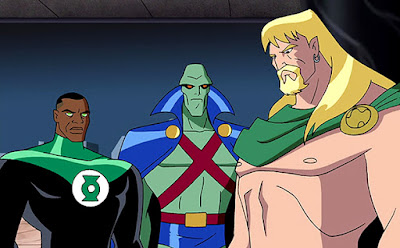 As far as communicating with animals goes, this Aquaman does call for the assistance of an Orca during one climactic moment, but we don’t see any psychic waves emanating from his head (as was the case on The Super Friends in the 1970’s). 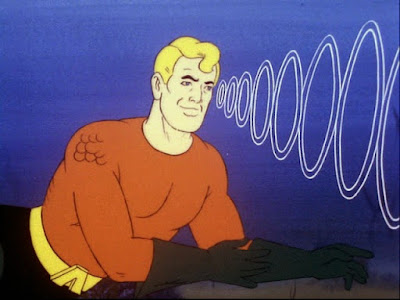 This Aquaman is so attitudinal that he gruffly pushes Wonder Woman aside -- without so much as an "excuse me" - and even, by episode’s end, doesn’t fully trust the surface dwellers. In the original continuity, if I remember correctly, Aquaman was one of the founding members, actually of the JLA.

As I noted in my review of "Secret Origins" earlier today, the writers of Justice League apparently found it necessary to cause Superman incredible pain on a regular basis in an effort to humanize the character and show that he wasn't a God. In this story, Superman is constantly being zapped and hurt by Atlantean weaponry, so we can't assume that he is invincible. Again, I will say that this approach doesn’t really work. Once you realize what the writers are up to, it becomes something of a joke that Superman is constantly being battered and blasted.

Man of Steel…magnet for pain.