In “The End of Time,” Octavia (Christiane Kruger) returns to Medusa with Professor Evans (Derek Farr), so he can help negotiate a hostage swap. Once Fulvia and Adam return to Medusa, Liz (Lisa Harrow) and Rudy Schmidt (Christian Quadflieg) can return to Terra.

Unfortunately, something strange has happened on Medusa. All the women have vanished, the men are tranquilized, asleep in their dormitories, and the vast city is abandoned.  The only other people awake and in the metropolis are Liz and Rudy, who are trying to determine what has occurred.

And what has occurred?

Apparently, “The End of Time.”  As Liz, Evans and Rudy learn, the Medusan people mark time by the life and death of their presidents. Time (symbolically stops for the culture when a president dies, and it does not resume until a new president is selected.  President Clara (Dawn Addams) appears to be dead.

Worse, since Liz was awake during her death, she is accused of being a presidential assassin and exiled to the inhospitable surface of Medusa.

Upon closer inspection of Clara, however, Evans realizes she is not dead, only the victim of a bacteriological infection, a condition that the Medusans have no familiarity with, because they long ago conquered disease. He suggests antibiotics.

When Clara recovers, time is allowed to resume in the city, and Rudy rescues Liz from the surface. Evans returns home, having failed his hostage mission, but having saved a life. 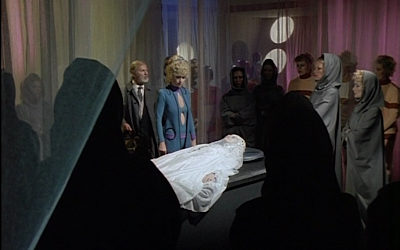 “The End of Time” is another very intriguing episode of Star Maidens (1976), since much is learned about Medusa, and its customs and history.

For instance, it is reported, at one point that men are put to sleep during the death of a President (the so-called period known as “The End of Time”) so that they do not launch an uprising or attempt to gain control of the planet. Apparently, at one point in Medusan history, a man did lead the planet, and was an unmitigated disaster as a leader.  The technology to tranquilize men is called a “hypnomat.”

We also learn, of course, about “The End of Time” ritual, the stopping of all life on the planet, since a president has died. Time only resumes, in the eyes of Medusa, when a new matriarch rises. Without leadership, without control, Medusa itself seems to die, or at least hibernate.  I wonder how this would work if the planet were at war, or in crisis. 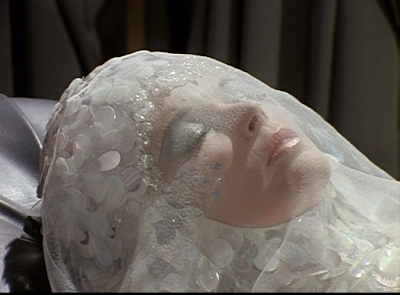 There are two other observations worth making at this juncture (episode ten of thirteen). The first is that the writers absolutely seem to prefer dealing with the “Medusa” story, rather than the “Earth” story, where Fulvia and Adam are suspiciously circling another.  The series boasts a schizophrenic feel because the Medusa stories are presented as straight-up science fiction tales in a futuristic setting, whereas the Earth story is campy, romantic, and at times, blisteringly caustic. 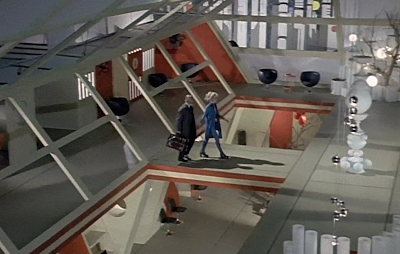 “The End of Time” commences as an “Empty City”-type story (think: Star Trek’s “Mark of Gideon” or Space:1999’s “One Moment of Humanity”) but then evolves into a meditation on the idea that sometimes an advanced civilization cannot deal with a “primitive” problem, like a bodily infection. The Medusans so long ago conquered illness, that even the creepy robot doctor is not able to diagnose Clara’s “death.” 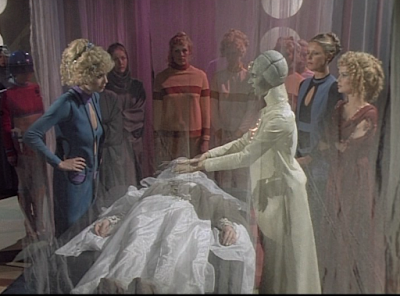 The point I am making here is that Star Maidens has a reputation, among those who have seen it, as a “campy” 1970’s science fiction series. That description is apt, but only for the Fulvia/Adam episodes set on Earth.  The episodes on Medusa grapple, ambitiously -- and seriously -- with genre concepts, tropes, and commentary.

The second point I’m going to make here involves the thematic underpinnings of the series. As was the case in last week’s story, this tale focuses on the idea that the women of Medusa can’t help themselves.

In “What Have They Done with the Rain?” Rudy -- a man – saved the planet from its own environmental short-sightedness. In “The End of Time,” a different man -- Professor Evans -- saves the women of the planet by proving that President Clara is sick, but not dead, and that, therefore, Liz is not an assassin.

When you boil it down, the idea in both stories is that only men can lead, or come up with answers, and that the matriarchy of Medusa would be doomed without them.

This very concept betrays the thematic thrust established early in the series, that Earth and Medusa are mirror images of one another, and that both are locked in nonsensical prejudices about which gender is superior.

At this juncture, it’s clear that the series seems to suggest men are better capable of leading, or at least solving problems. We have yet to see a story in which the Earth is doomed, because of the short-sighted behavior we have seen in these two episodes, and only a Medusan woman can save it.