After rescuing a group of colonists from a deadly environmental disaster, the Searcher proceeds to take these settlers to a home on a new, more hospitable planet.

As the colonists board the craft, a female fugitive, Eleefa (Devon Ericson) joins their numbers.  Buck (Gil Gerard) sees that she is pursued by a squad of masked Dorians, and helps her escape to Searcher.

En route to the new world, however, the Dorians intercept the Searcher in a massive and imposing dreadnought. 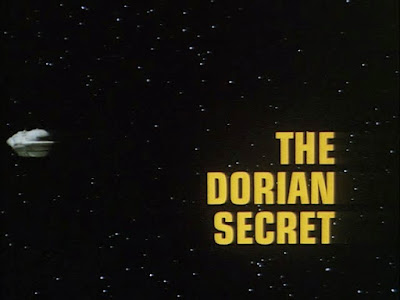 Their leader, Koldar, claims that the Searcher is harboring a murderer, a treacherous woman, and demands that she be handed over. Buck and the crew of the Searcher understand that the woman would receive no justice from the harsh Dorians, a mysterious, secretive alien race.They refuse to give the woman up.

In response, Koldar utilizes a sadistic weapon -- “thermal intervention” -- against the Searcher and her people, rotating heat beams and freezing beams to discomfort and agitate the non-compliant humans. 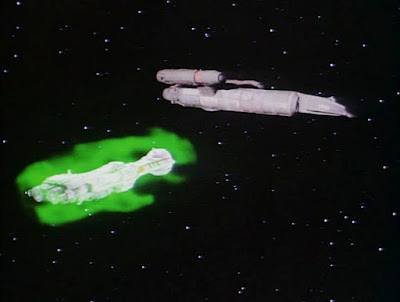 Soon, the colonists grew desperate, and vote to hand-over Eleefa to the Dorians.  An angry Buck boards their ship, to argue for her release, following this decision.

In doing so, Buck learns much more about the origin behind the old saying, “dark as a Dorian secret.”

After negotiating with Koldar, Buck returns to the Searcher and admonishes the human colonists for the darkness in their souls, which permitted them to turn an innocent woman over to the harsh aliens  If they are to start a new life on a new world, Buck tells them, they will need to reflect on their irrational behavior. 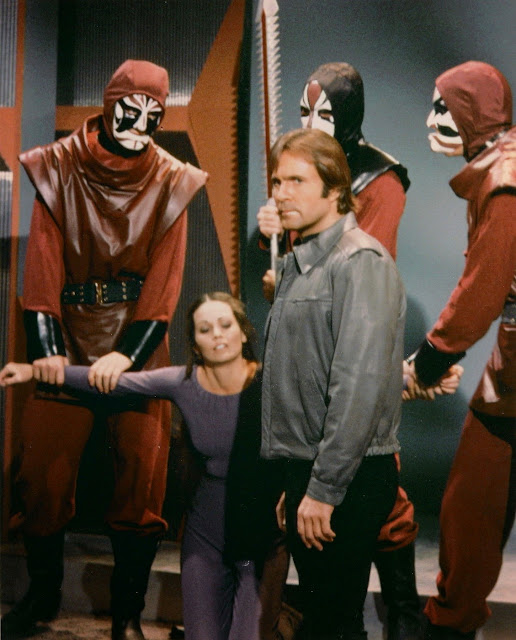 “The Dorian Secret” is the very last episode of Buck Rogers in the 25th Century (1979-1981), though -- in keeping with cult-TV formats of the day -- it does not provide closure for the series’ premise.

Instead, this is a standalone adventure that boasts some qualities in common with The Twilight Zone (1959-1964) episode “The Monsters are Due on Maple Street.”  That famous tale from Rod Serling concerned prejudice, the mob mentality, and the ways that humans can, in a crisis, succumb to irrational fear.  Similar forces are clearly at work in “The Dorian Secret.”

This is one of the better installments of the second season, for a few reasons. First, as I indicated above, “The Dorian Secret” serves as a social commentary about human nature. The colonists featured in the tale are so concerned with their own survival that they are willing to sentence an innocent woman to torture and death. 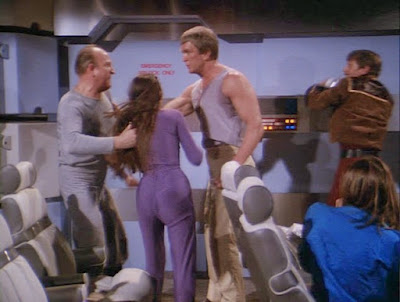 They are selfish, short-sighted, and accordingly, very realistic.

In short order, they are able to convince themselves that the fugitive isn’t really their problem, and that it is okay to return her to her people, the harsh Dorians. They rationalize their fear, and their behavior, and are not accountable for their actions.  We thus see them, and ourselves, clearly.  We get a little uncomfortable, the episode tells us, and we’re willing to do anything, even throw a living being under the proverbial bus, to become comfortable again.

The second aspect of “The Dorian Secret’s” social commentary returns to a theme we saw in the best episode of Buck Rogers in the 25th Century: “The Plot to Kill a City.”

In that excellent first season entry, a masked alien named Varek gave his life to stop a nuclear disaster near New Chicago, so that Earth would not suffer the aftermath (again) that deformed, demoralized, and mostly destroyed his own people, on his planet.

“The Dorian Secret” similarly features masked aliens -- a whole race of them, in fact.  In this case, it is Dorian Law that no mirrors or reflecting surfaces should be allowed on their home world. Similarly, Dorian citizens must never be allowed in public without their face masks on. The Dorians rigorously adhere to this custom, and don’t accept meddling from strangers, or aliens. 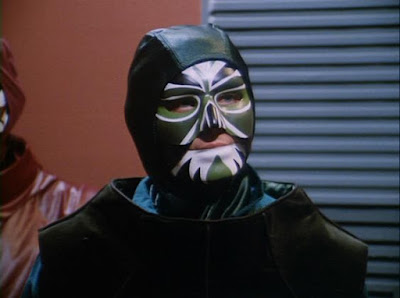 At story’s end, we learn the reason why: after a nuclear holocaust, all surviving Dorians came to look…identical.

In the bizarre finale, the Dorian bridge crew unmasks before Buck, and the same actor plays all of the crew, including Koldar (who is voiced by Walker Edmiston). Koldar discusses the terror and agony of the knowledge that “every face” encountered is a “mirror image of your own.”

The Dorians have no real visual identity. Inside, they are different people. But on the outside, they may as well be clones.

This revelation is quite a surprise, and somewhat effective. The unmasking scene loses some impact because, let’s face it, a face can look different for a few reasons: facial hair, haircut, and even age.  Every Darian we see on the bridge, including Koldar, is exactly the same age. Koldar should look twenty to thirty years older than at least some of his crew members. At least he wears a different, slicked-back hair-style.

Still, the final moments of “The Dorian Secret” pack a decent punch. Buck sternly lectures the colonists about their behavior, and it’s is clear he is angry. He has just had a lesson not only in Dorian nature, but in human nature, and this is a somber and sobering note to end the episode -- and the series -- on.

I love that Buck is a character who doesn’t have to obey an enforced system of rules (like Starfleet protocols) and can, without fear of reprisal, show his distaste for people he finds, well, distasteful.

I readily admit my bias in cult-television programming: I would rather watch a show that is about something -- even if it fails to hit on all thrusters -- than watch an empty show that doesn’t really mean anything, but “entertains.” Some fans have considered “The Dorian Secret” heavy-handed, preachy, or obvious, and at moments, the installment is indeed all of those things.

And I’ll still take it, warts and all, over empty-headed escapism like “Vegas in Space” or “Twiki is Missing.”

“The Dorian Secret” is an attempt, at least, for Buck Rogers in the 25th Century to live up to the grand tradition of series such as The Twilight Zone or Star Trek. In its exploration of the alien, the episode works to excavate some quality of life here on Earth.

I would have loved to see how the series’ makers learned lessons from this episode, and grew better and stronger in delivering this kind of tale.

Unfortunately, “The Dorian Secret” was an end, not a new beginning.