The Six Cult-TV Diseases You Don't Want to Contract 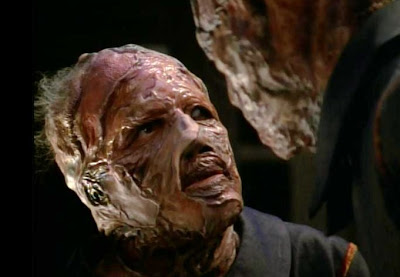 Disease has often been termed the greatest enemy mankind has ever faced.  If you go by cult-television history, that idea certainly seems true.  A wide swath of genre programs have memorably showcased the (often-gory) impact of disease on the fragile human life form.

Of course, some of these fictional diseases are much more hideous and horrible than others.  Below is a tally of six truly dreadful, nightmare-inducing cult-TV diseases you really, REALLY don't want to contract. 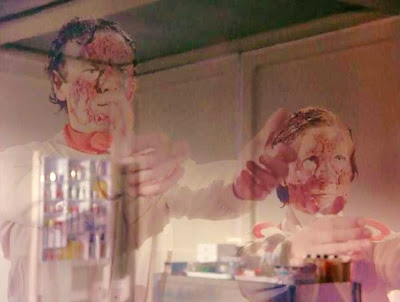 6. "Venusian Plague."  (From the Space: 1999 episode "The Lambda Factor.")  In this Year Two episode of the 1970s Gerry Anderson outer space series, Commander John Koenig (Martin Landau) relates a horrifying story from his days as an astronaut cadet.  On a routine re-supply mission to a Venus space station, two of Koenig's friends and ship-mates, Sam and Tessa, became infected with the plague there.  Rather than risk bringing the incurable disease back to Earth, Koenig had to leave his friends behind to die.  In the episode, Koenig relates this harrowing story to Dr. Helena Russell (Barbara Bain), and we also see the "ghosts" of his guilt, namely Sam and Tessa...but as plague-infected ghouls.  Their faces are scarred and marred by blisters, and well, it isn't a pleasant sight.  I recounted the full, gory details of the Venusian plague in one of my contributions to the officially-licensed Space: 1999 short story anthology, Shepherd Moon (2010).  But the scary notion underlining this disease is its origin.  The Venusian Plague originates on another world, but affects us.  Was it engineered?  Created to keep us away? I've always wondered... 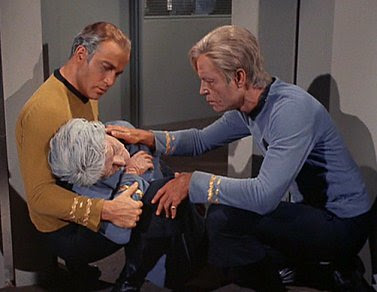 5. "Gamma Hydra IV Disease."  (From the Star Trek episode "The Deadly Years.").  In this tale, Kirk, Spock, Scotty, Bones and Lt. Galway are infected with a strange form of radiation while on a planet called Gamma Hydra IV.  Because of their exposure, the landing party begins to age rapidly.  Kirk loses command of the Enterprise, and Spock loses something worse: Kirk's friendship.  It's terrible to witness these vibrant, intelligent, young heroes succumb to the frailties of the flesh, and "The Deadly Years" is an affecting installment because of this. Here, the infected crew members develop arthritis, senility and other maladies associated with extreme old age, and as audience members we get to reflect that there's nothing worse than growing old before your time.  In 1988, Star Trek: The Next Generation re-visited the idea of an "aging" disease in the episode "Unnatural Selection." 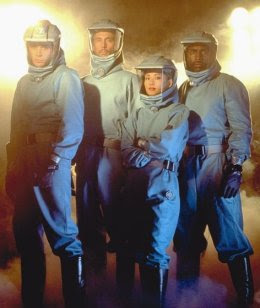 4. "The Angel of Death" (From The Burning Zone pilot)  In the premiere episode of this short-lived 1996-1997 UPN series, archaeologists in Costa Rica excavate a cave that has been sealed for 15,000 years and inadvertently let loose a sentient disease.   The infected can be detected from hemorrhagic-appearing (bloody) eyes.  This disease is also sentient, part of an intelligent "hive" (shades of Doctor Who: "The Invisible Enemy.") It can even control and direct subordinate "warrior viruses" to further infect and distract humanity.  The fear at work here is one regarding our enemy's "intent," and perhaps even one involving...scale.  Can something as microscopic as a virus think, plan, and conquer the human race?  Being struck with a disease is terrible enough, but to imagine that there is insidious purpose or malevolence behind that disease ups the ante considerably.  I have often described The Burning Zone as "disease of the week," and other shows involved an outbreak of spontaneous combustion (!) and an epidemic of malaria. 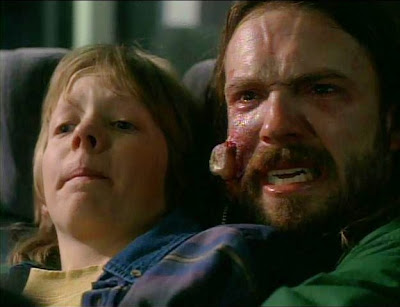 3. "F. Emasculata." (from The X-Files episode of the same name.)  This second season segment of the Chris Carter  series also begins with the discovery of something terrible in the rain forest of Costa Rica, namely an insect parasite that burrows inside living human hosts and creates grotesque, white, pulsating pustules on the skin.  These boils throb and grow, and ultimately explode, spreading the disease all around in a sickly, moist burst.  It's absolutely the most nauseating thing you've ever seen. My wife still refuses to watch this episode of The X-Files, in part because of a final, tense stand-off set on a bus.  A badly infected man -- with pustules growing and threatening to burst on his cheek -- uses a young, innocent child as a hostage.  Mulder (David Duchovny) must free the boy, and do it before that damned zit bursts. 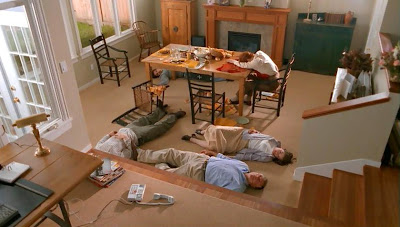 2. "The Marburg Virus" (From Millennium's two-part "The Fourth Horseman/The Time is Now.")  The disease featured in this episode of Millennium remains absolutely horrifying. One scene -- set at a middle-class family's Mother's Day dinner -- depicts an American family bleeding out before our eyes.  The disease (originating from contaminated chicken, of all things...) quickly sets in, and dark brown pustules begin to form on the infected family members.  The Mom dies first as her white blouse becomes awash in crimson.  Then, all at once, these poor folks sweat out their whole blood supply in a matter of seconds.  This is also the disease that costs Frank Black (Lance Henriksen) dearly in terms of his family... 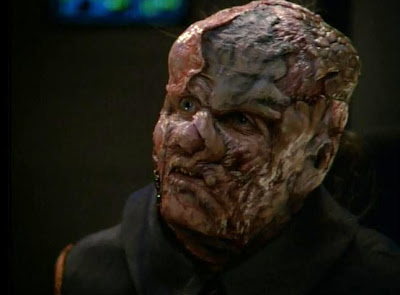 1. "The Phage" (From Star Trek: Voyager's "The Phage," "Faces," "Deadlock")  The Vidiians remain one of the most creepy and disturbing alien races ever featured on Star Trek.  Residents of the Delta Quadrant, the Vidiians suffer from a necrotizing -- flesh eating -- virus.  Infected souls must undergo skin transplants and skin grafts regularly to combat the effects of the deadly disease, but even after such "healing" operations still appear absolutely hideous, like rotting corpses.  Perhaps the creepiest thing about the Phage is that the disease has also, essentially, devoured the Vidiian Sodality's culture.  These advanced, once-peaceful aliens have forsaken art, commerce and other noble pursuits in order to save themselves from extinction.  The Vidiians are thus terrifying because they embody two fears about our mortality.  First, that we could succumb to a deadly, disfiguring disease ourselves.  And second, that it could sweep away all of our loved ones, and even destroy our very civilization.  Imagine not only being disfigured and ill yourself, but watching your children and spouse suffering and dying from the Phage every single day.  It would be Hell on Earth...
at March 12, 2017