Saturday Morning Cult-TV Blogging: Tarzan, Lord of the Jungle: "Tarzan and the Graveyard of the Elephants" (October 9, 1976)

In “Tarzan and the Graveyard of the Elephants” a greedy king named Aga -- of the distant city Navordia -- captures Tarzan to learn of the secret location of the legendary graveyard of the elephants.

Tarzan refuses to divulge the information, and bears witness to a city obscenely rich with ivory.

The evil king then makes Tarzan fight a “great beast:” a woolly mammoth called Bentor. Tarzan recognizes the beast as an “animal who belongs to an earlier time,” and seeks the help of lions, apes and elephants to protect the graveyard. 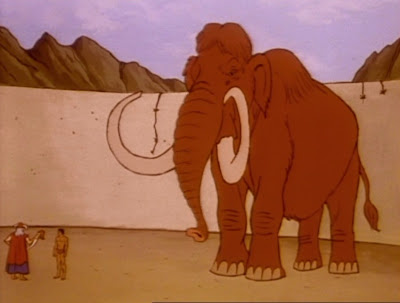 King Aga responds violently, burning the jungle to terrify the animals and make them retreat. Tarzan will not back down, however. He fights the mammoth and defeats the evil king.  His elephants reclaim the tusks stolen to decorate the city, and return them to the graveyard, which remains “the greatest secret in the jungle.” 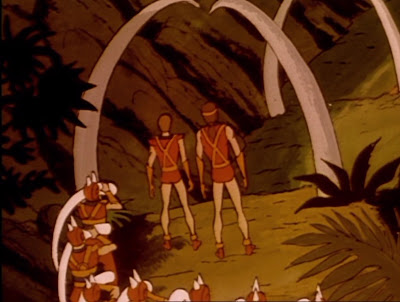 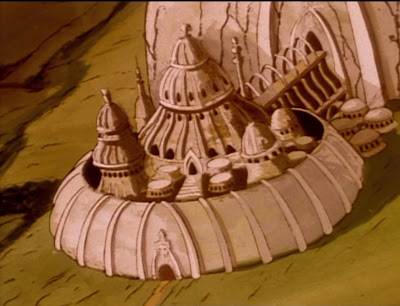 The graveyard of the elephants, a key element in the early Weismuller Tarzan films, recurs in this episode of Filmation’s Legend of Tarzan series.  As before, Tarzan is a zealous protector of the graveyard’s location, and proves once more that he is a friend of the animal kingdom.

Much of the story’s theme is transmitted through the visuals.  Aga’s city is a decadent, terrible place, where elephant tusks – ivory – are everywhere. There are ivory towers at the entrance, and dotting the roads. Aga wears tusks on his helmet. We see that the motif of the city is over-used, and unnecessary.  They are a sign of extravagant wealth, a decoration or affection. 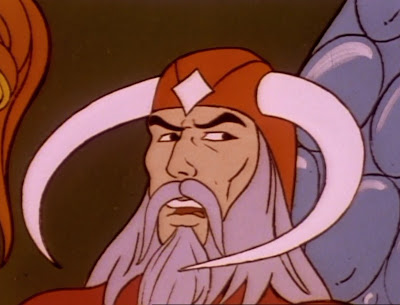 The wrong they represent is undone in the episode’s denouement, as the elephants storm the city and show the (missing) respect for the dead.  They take the tusks from the city, one at a time, and transport them...home. 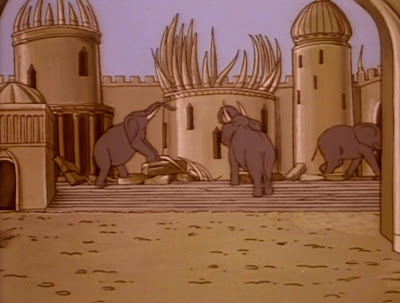 It’s fascinating too, that the monster of the episode is a Mammoth, another creature with tusks that many people associate with elephants. Aga worships it as a God, but Tarzan sees it for what it is: an angry animal.  He talks respectfully to Bentor, and does not kill him or harm him. He collapses a bridge so the animal can no longer terrorize the innocent.  In other words, Tarzan even shows his enemies respect, a characteristic which makes him a true hero (and role model).