Cult-TV Movie Review: The Archer: Fugitive from the Empire (1981) 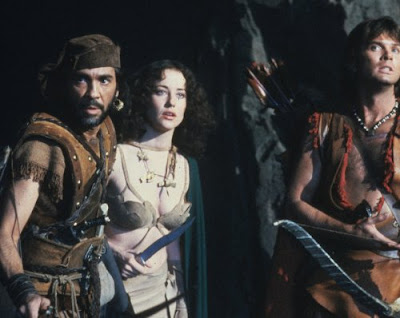 I was just eleven years old when The Archer: Fugitive from the Empire (1981) first aired on NBC in prime time.  Although that premiere event was a long, long time ago, I distinctly remember the TV-movie (and back-door pilot...) being announced on-air as the first of several TV adventures set in a fantasy universe created by writer and director Nicholas Corea (1943 – 1999).

To my disappointment, no additional adventures ever appeared.

And adding insult to injury, The Archer: Fugitive from the Empire has never been officially released on DVD, though Universal Studios did put out a VHS release back in 1987, which I tracked down and screened for this retrospective.

Other countries, it seems, have done a little bit better by the TV-movie.  It has been released under the title The Archer and the Sorceress in parts of Europe, I understand.

I was very eager to see this made-for-TV film for the first time in over thirty-years because I possess such strong memories of the imagery from The Archer.

These images -- including Snake Men warriors rising out of the ground to ambush unwary travelers, or the beautiful Sorceress Estra (Belinda Bauer) and her fearsome tomb guardian -- gained a foothold in my young psyche all those years ago, and they remain strong enough that I have never forgotten them.

Re-watching the telefilm in the 21st century, I could see why my young mind was so drawn to this fantasy adventure.

It features great visualizations of an “acid lake” (which an unlucky Snake Man falls into, face first...), involves a sentient (or at least conscious) mystical weapon called “The Heart Bow,” and showcases a great villainous performance by Marc Alaimo -- DS9’s Gul Dukat -- as a traitor named Sandros who seems cut from the same diabolical cloth as John Colicos’ Baltar.  Genocide is hardly a consideration when personal power is at stake.

Additionally, Belinda Bauer is absolutely smoldering and sexy as the sorceress Estra, and the ubiquitous Vasquez Rocks even makes an appearance in the latter-half of the film.

But clearly, and I mean this without negative judgment, fantasy television has come a long way since 1981, as Game of Thrones (2011 - ) testifies. The Archer: Fugitive from the Empire is an intriguing and ambitious production, but one saddled with a low budget, and some poor acting.  Yet despite such abundant drawbacks, the productions also boasts some memorable interludes. 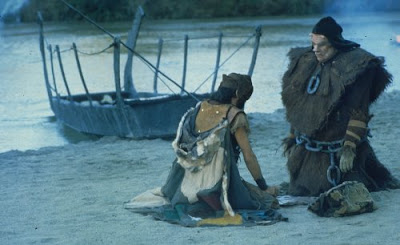 The Archer: Fugitive from the Empire is set in a fantasy world, “in a time that may have been, or a time that still might be.”  A voice-over narrator explains in detail how the warring people of Malveel are imperiled by an Invasion of the Dynasty, a force led by Gar the Draikin (Kabir Bedi) and his army of Snake People.

The King of Malveel, Brakus (George Kennedy) wants to join together all the barbarian tribes of his land to repel the invasion of the Dynasty, but is betrayed by the cowardly Sandros, and then murdered.  Brakus’s son Toran (Lane Caudell) is framed for the King’s murder, and he must flee the land, lest he be killed too.

After accepting ownership of a mystical weapon called “The Heart Bow” which can vanquish enemies with explosive power, Toran sets out to find Lazar-Sa, the legendary wizard who may be able to train him, and help him restore his kingdom.

But the Goddess Estra (Bauer) presents both a love-interest and an obstacle for Toran.  She wishes to avenge the spirit of her Mother, who was murdered by Lazar-Sa years earlier… 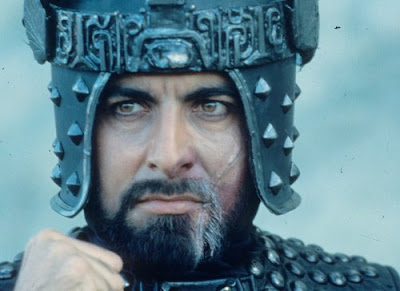 The first observation I should probably make here is that I watched The Archer: Fugitive from the Empire on a 26-year old VHS tape

The color palette was dark and darker, and the sound was muddy to say the least. These factors surely hindered a pleasurable viewing to a great degree.  In other words, the movie probably looks a lot worse here than it otherwise would on an official new release, all things being equal.

But even outside the problems with the medium of VHS, I could still detect how The Archer suffers tremendously from its insufficient budget.  It features a lot of familiar-looking TV actors wearing bad wigs, bad costumes, and mouthing incomprehensible, declamatory exposition. Indeed, even the persistent voice-over narrations can’t fully explain all the byzantine intricacies of the nation of Malveel and its storied history.

On the one hand, I admire Corea for so clearly taking the fantasy milieu seriously.  This TV-movie premiered just as D&D was really taking off in the pop culture, and with Conan: The Barbarian (1982) on the horizon, so he must have sensed there was an opportunity to treat the genre in a grown-up, respectful fashion.

Accordingly, Corea doesn’t play his movie for laughs, or mistake the adventure for high-camp. Additionally, it’s clear that the writer devised a lengthy and intricate history for his fictional world, and had really thought that history through.

Yet on the other hand, the ambition to impart so much meaningful information about his fantasy universe in just 97 minutes renders much of the action and relationships baffling.   The "bigger" story of Malveel keeps getting in the way of telling a compelling story about Toran's heroic quest.

The current iteration of dramatic narrative television, best exemplified by Game of Thrones, allows for a complex world to be introduced almost literally a kingdom at a time, with the grand action moving only a chess-piece at a time, or a chapter at a time, so that viewers come to understand character motivations, alliances, history, and other important factors.  By contrast, the storytelling style of 1981 offers The Archer: Fugitive from the Empire no such safe harbor, and so the narrative and characterizations are, frankly, a bit of a mess. 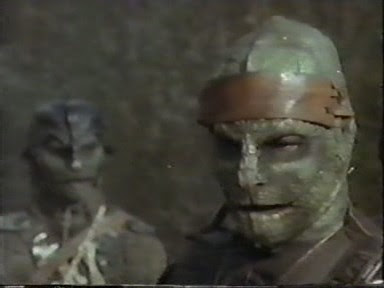 Still, even though the surfeit of ambition collides repeatedly with the tele-film's paucity of budget, some elements of The Archer: Fugitive from the Empire yet shine.

The Snake Men, for instance, are rendered in frightening and believable make-up.  In fact, this make-up holds up very well both in terms of the series’ contemporaries (such as V [1983]) and in terms of today’s special effects expectations.  Additionally, some of the staging with the Snake Men, particularly their first appearance as they rise -- in slow motion -- from a leafy dirt bed to attack unwitting sojourners, remains impressive.'

I also like how the Heart Bow vanquishes enemies.  An arrow strikes an opponent, and it looks like a grenade has detonated on their torsos... The Archer’s obsession with the Heart Bow also brought back memories for me of Krull (1983), and the glaive, another mystical weapon found on a different heroic quest.  But that fantasy film had a visual sweep  and majesty that the comparatively low-budget The Archer simply can’t muster.

It's always tough when nostalgia meets reality, and I can't honestly claim that The Archer: Fugitive from the Empire lived up to my enthusiastic youthful memories of it.   The images I had remembered from my youth remain vibrant, but at times the movie just seems to drone on, one talky-scene after the next. The last half of the film is particularly dull, and some scenes with "humorous" towns-folk are positively cringe-inducing.

Still, I'd love to see a cleaner print of The Archer: Fugitive from the Empire, and watch this old tele-film under ideal viewing conditions.
at June 17, 2016