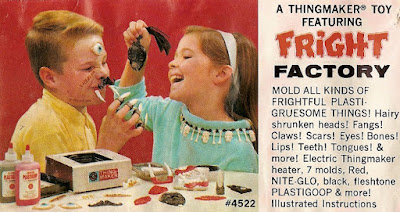 My second article at Flashbak this week remembers one of my favorite toys of the 1960s: Mattel's Thingmaker, and Creepy Crawlers.

Here's a snippet and the url: (http://flashbak.com/mattels-creepy-cralwers-need-make-bug-thingmaker-set-electric-plug-37746/ ) 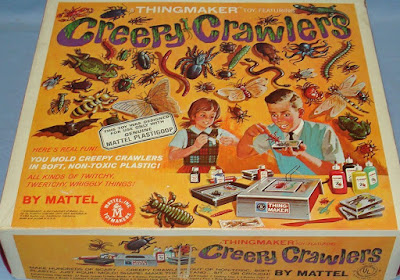 "Although I was raised in the 1970s, a number of memorable toys from the 1960s ended up in my bed room, or on my closet shelf, including Mattel’s Strange Change Toy (1967) and the great….Thingmaker.

Mattel introduced the Thingmaker in the year 1964, and kids immediately in love with the toy and its concept. Basically, you would pour a slimy substance called “Plastigloop” -- available in a variety of bright colors -- into a metal mold, and then heat it up on an open hot-plate.

After a few minutes, you would have your very own (and very strange…) rubbery creature that you could scare your sister or brother with, not to mention your parents.

The Thingmaker later became known as “Creepy Crawlers,” and it is under that name that the concept has endured to the 21st century, and been introduced to further generations.

Here’s a couple of looks back at the first iteration of Mattel’s Thingmaker:"

Email ThisBlogThis!Share to TwitterShare to FacebookShare to Pinterest
Labels: At Flashbak, Flashbak, toys