In “Follow the Leader,” a planet-quake strikes just as Professor Robinson (Guy Williams) and Dr. Smith (Jonathan Harris) are exploring a cavern.

Robinson falls into a subterranean room, heretofore buried, and stumbles upon an ancient alien temple.

There, the disembodied spirit of an ancient warrior -- Canto (Gregory Morton) -- possesses Robinson’s body, transforming the kindly patriarch into a draconian, vicious brute of man. John returns to camp changed, and the others soon take notice of his peculiar and uncharacteristic behavior.

Only the Robot understands what is occurring, and offers a dire warning to the Robinsons.  Unless the body possession can be stopped, Professor Robinson’s identity will soon be lost forever, absorbed by Canto.

When Will (Bill Mumy) interferes in the alien temple, hoping to find a way to destroy Canto, Canto strikes back.  He takes Will to the precipice of a bottomless pit, where he intends to push him over the edge.

Realizing death awaits, Will makes a last ditch attempt to reach his father… 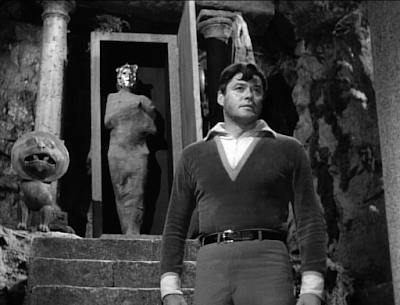 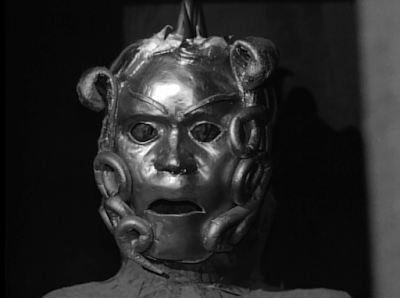 The last episode of Lost in Space’s (1965-1968) first season ends the black-and-white catalog on a high note, and a disturbing one too.

The kindly John Robinson (who has always shown such restraint, especially vis-à-vis Smith), is possessed by a wicked, merciless and aggressive alien.  In the episode’s shocking denouement, the alien in Robinson’s body, Canto, nearly kills an innocent child, Will.

Fortunately, Will is a smart kid, and thinks quickly.  Before he plunges into the abyss, he asks Canto if he can take off his helmet, so he can see his father’s face “one last time.”

Canto agrees, and that’s when Will strikes, looking into Robinsons’ eyes and telling his father that he loves him.  From there, Robinson fights his way back, and destroys the helmet, the source of Canto’s power. 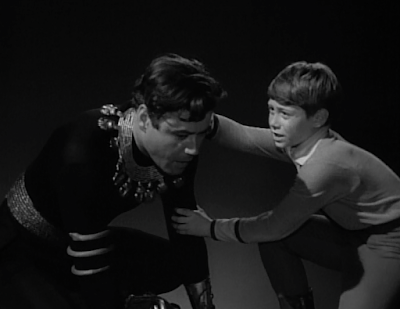 On the surface, “Follow the Leader” is another alien possession story, the brand that is a dime a dozen on various incarnations of Star Trek (“Lonely Among Us,” or “Warlord” to name two).  But “Follow the Leader” also features a dramatic and powerful sub-text.  This is a story about alcoholism in the nuclear family, perhaps.

One day, your father is suddenly different: cruel and mercurial. He shouts and yells, and goes off into violent fits.  He verbally upbraids you and your mother, as well as other family members (as John does to Maureen, Smith and will here…).

Suddenly you don’t feel safe or secure, and this man in your midst, you realize, is an enemy.  He has “changed.”  He’s different.  He wears a mask of cruelty, hiding, perhaps, who you think he is; or who he would like to be. 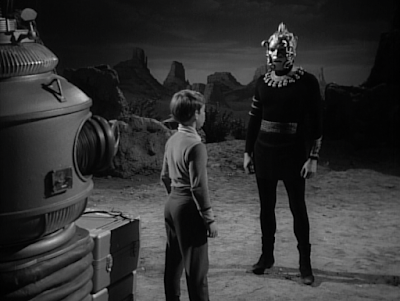 The sci-fi idea of alien possession replaces alcohol, but the metaphor is in place.  Will and the others are at a loss to help John, or stop John.  He can be reached, finally, only by forcing him to remember his family obligations, his love of his son, for example.

And that’s one emotionally powerful final scene on the precipice.  In part, I suppose, because “Follow the Leader” goes so far. Canto walks Will onto the precipice, and forces him to look down.

Will understands what’s happening, and says something along the lines of “you’re going to push me over the edge, aren’t you?”  Canto acknowledges that yes, he is going to do that.

The calmness and rationality with which both Will and Canto face this horrible fate is chilling.  There is nothing childish or juvenile about this moment. Will is a smart kid, and he knows what’s happening to him.  Meanwhile, Canto has no love for him, and no desire to save his life.

The more I think about it, chilling is the appropriate word.  A father is about to murder his son.  Yet Will shows such composure, and Canto, no humanity whatsoever. 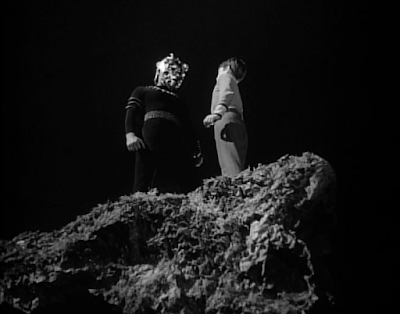 “Follow the Leader” feels ever-so-much more urgent and immediate than many episodes of Lost in Space, and there is a degree of tension and anxiety present in this episode.

“Follow the Leader” showcases, perhaps, what the series might look like when the buffoonish Smith isn’t the center of the action.  It also cements the idea that I've talked about here many times before. The best episodes of Lost in Space are those that take some topic of life here on Earth (senseless war, alcoholism, the beginning of adolescence, etc.) and translate them to the space frontier, but in a family milieu. This episode absolutely follows that pattern.

Only one quibble.  How many underground civilizations are there on Priplanus, the Robinsons' planet?  By my count, this is the third! 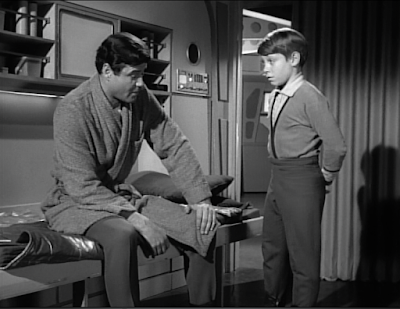 Next week, Lost in Space goes color in “Blast off into Space!,” the second season premiere.
at July 21, 2015