O'Mara may be best-remembered in America, however, for her turn as Cassandra 'Caress' Morrell -- sister to Joan Collins' Alexis -- on the prime-time soap opera Dynasty (1986). 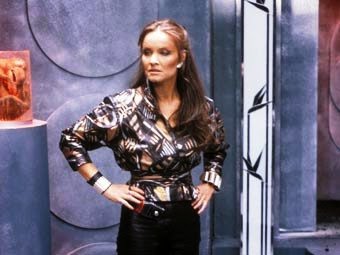 For genre fans, O'Mara was also a welcome and beloved face.

She portrayed a renegade Time Lady -- The Rani -- on Doctor Who (1963 - 1989) on three memorable occasions.  She starred opposite the sixth Doctor (Colin Baker) in "Mark of the Rani" and opposite the Seventh (Sylvester McCoy) in "Time and the Rani."  In 1993, Ms. O'Mara  resurrected the villainous character for the short called Dimensions in Time.

O'Mara also made a mark in the much-loved horror films of Hammer Studios, playing in The Vampire Lovers (1970) and The Horror of Frankenstein (1970). 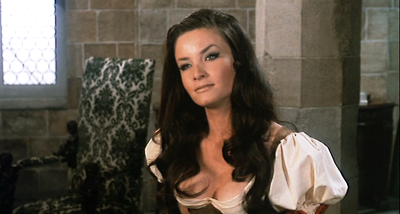 A performer who could exude a dark intelligence as well as a brand of alluring sensuality, O'Mara brought humanity and subtlety to her many roles in and out of the genre.

In fact, Doctor Who fans of the modern era have often clamored for a return in the new series of The Rani, a testament, no doubt, to O'Mara's delightful and beloved performances in the role from the mid-1980s.
at March 30, 2014

Email ThisBlogThis!Share to TwitterShare to FacebookShare to Pinterest
Labels: 2014, tribute